Christmas - where are we up to?

- December 19, 2009
Cake: made, fed lovingly with brandy every week, but not yet marzipaned or iced.  I used to think I hated marzipan until I discovered that what I didn't like was very sweet, shop bought marzipan.  I love home made marzipan with lemon juice and ground almonds so need to get on and make some.

Pudding: made, sitting in the pantry, wrapped in the muslin it steamed in.

Turkey: ordered from the butcher to be picked up along with the gammon and the sausagemeat on Wednesday morning.  I need to remember that giving myself half an hour to do this will not work.  There will be conversations going on the butcher which is also a post office and a deli which will mean the whole operation will need double that amount of time.

Other meals: planned, sort of.  I have a rough list of things to cook which is waiting the arrival of the first of the returning adult children.  Son and daughter in law have offered to cook a meal or two over the next few days so they may have a look at the ingredients in freezer and pantry and have ideas of their own.

Cards: some written, some done by Ian, we have now hit the stage where all the distant people are done and others may or may not happen, depending on what else is to do and what comes through the door. 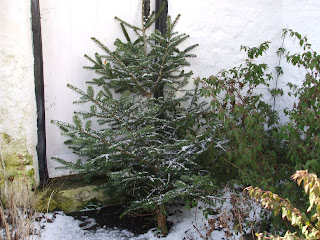 Tree: delivered by a kind friend and outside, leaning against the never used front door of the farmhouse.  I am hoping Ian and son between them will install it inside and that we can decorate it tomorrow so that it will be hung with all our ancient and rather tatty ornaments when daughter, son in law and the baby arrive on Monday.  There was a year when they were all teenagers when I tried to have a more glamourous and minimalist tree.  I went out and bought some rather beautiful silver decorations and banned the tinsel.  It was a total waste of time.  There was outcry.  Each of them began smuggling something else on: the wonky robin, the drunken knitted snowman, the toilet roll cylinder covered in shiny paper made when one was about four.  I admitted defeat.  Sentiment and excess rule.

Decorating the house:  Let us see tomorrow what is growing out in the field.  I know that hellebore foetidus  is out in the garden and some viburnum bodnantense is beginning to come into flower, far too early.  They might make the centre of a table decoration for Christmas Day.  Otherwise there is holly in the hedges and ivy growing all over the bank behind the house so we will have that and nothing else in the house I think.  At least there is so much of it that if it begins to flag the twigs can light the fire and another armful can come inside.

Presents: all done.  Not too much although as my parents' and my sister's and my brother's presents come into the house things are beginning to pile up very satisfyingly.

Carols: sung, beautiful, no thanks to me at all, but beautiful.

Wrapping: hmm, we have done some (we as in Ian who can wrap so much better than I can.  Mine look as if I threw the paper on hopefully and then sellotaped until I ran out).  Sadly there are loads more to do and Ian has had an operation on his hand today.  Perhaps we shall just go for the dog chewed look.  It will go with the slightly tatty, homemade look of everything else!

Candles: there are loads,  a new haul from Morrisons.

Wine: by the caseload.

So there should be food, and wine and candles.  Candles hide a multitude of sins! 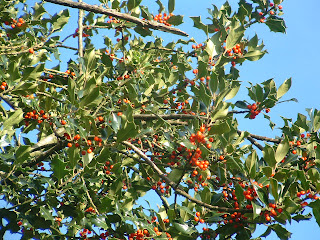