- January 15, 2010
When I was a child I loved the Narnia books by C.S. Lewis, especially "The Lion, The Witch and The Wardrobe".  I also adored "The Magician's Nephew" and "The Voyage of the Dawn Treader".  I remember sitting on the edge of my bed with a brand new copy of "The Voyage of the Dawn Treader" in a white paper bag on the bed beside me, a present from my mother.  I could practically feel it singing to me.  I took it out, and looked at the cover and turned it over in my hands and put it back in the bag so that I could have the pleasure of taking it out again.  I knew that once I started to read it I would gallop through it, reading on the lavatory and in bed and on the bus to school, until I started to feel travel sick, reading at the table with the book on my lap until my mother caught me doing it.  I was a voracious reader and a fast one and the book would soon be finished, so spinning out the time before I began was a necessary part of extending the excitement.

My favourite bit of "The Lion, The Witch and The Wardrobe" was the part when the grip of the endless, spellbound winter loosened and the snow began to melt, the streams began to move and there was the sound of water running beneath the ice.  The snow softened and the grass began to show green.  The iron grip of ice and snow dissolved into a growing, greening, shifting world.


It has been a little like that up here today.  We have had deep, deep snow, drifting and forming heaving frozen seas in the kitchen garden.  The path in front of the house has been dug out and dug out again.  When I went for corn for the chickens this morning I had to dig out the steps down to the pigsty because they were buried in snow again.  The great white hat of snow above the grey slates of the bakehouse had slipped down in the night and dumped a ridge of snow on the path.  As I dug I heard the soft drip, drip, drip of water running into the cast iron gutters.  There was a crump and thump behind me and a huge ten foot wide avalanche of snow slid off the house roof and hit the ground by the porch.  Life was on the move again. 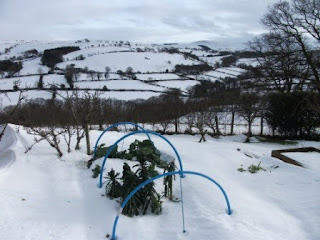 While the kale was still standing bravely in deep snow a trudge through the drifts down to the greenhouse revealed the first of the thaw.  There are gooseberries in there somewhere, struggling out above the snow amidst the bare apple trees. 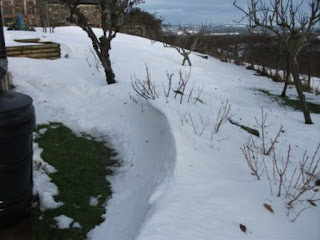 And here is proof that the world is still green under all that white.  The kitchen garden faces south east and is catching the very first of the rise in temperature.  You do not have to go far to find the grip of winter still tight on the north side of the cottage. 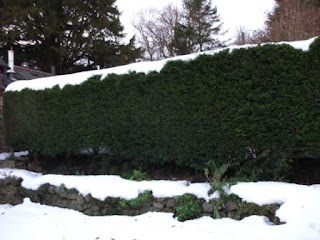 But in front of the cottage where the big pots stand the violas have shaken off the snow. 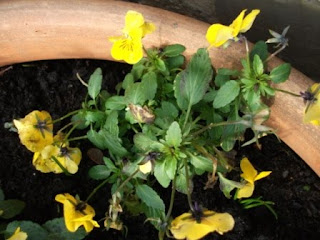 I love them.  It may even be that we shall lose enough of the deep blanket of snow over the weekend for me to find some glaucous green snowdrops just poking through.

It may not be spring but the snow is on the move.

How is it where you are?