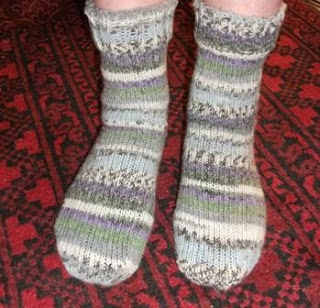 I barely believe this but I did it - look, two socks! I took Pipany's advice to put my time by the fire to good use and here they are.  Inevitably the second one is better than the first but only I know where I struggled.  Now they are on my feet and incredibly cosy.
Anyone who has read my blog for any length of time (both of you) will know that I am bit conflicted about women's traditional skills.  As a 70s feminist I embraced wholeheartedly the idea that the most important thing for a woman was financial independence and I have lived that life, partly by choice and, when I was a single parent, with no choice at all.  I have worked in a traditionally man's world for twenty years and loved it and thrived.  And if you have children and a job it is hard to find time to blow your nose, never mind to make aprons and peg bags and to darn socks as my grandmothers did.  But because I grew up in New Zealand at a time when everyone learnt and practised practical skills, I can knit and sew because I was taught as a teenager.
While I was raising my children and working and chasing my tail the only thing I continued to do that I suppose is a traditional woman's skill was to cook and bake.  I love cooking and eating and the food that my family ate was and is important to me.  Now adult, all my children can cook and cook well.  That must be something to do with the years spent sitting in the kitchen, stirring and tasting and being consulted and involved and, from quite early on, cooking things for themselves and being pleased with the result and the resulting applause.  My nearly four year old grandson arriving to stay for a couple of days came through the door saying today "Maybe we can make some chocolate tiffin tomorrow Grandma."
But the sewing and knitting fell by the wayside.  Something has to give.  I used to think it was my social life.  On bad weeks I thought it was me.
But I still thought while I juggled my job and my family and my sadly neglected house that those traditional female skills should be valued.  I thought of the extraordinary skill of my grandmothers as they made and mended and turned shirt collars and sheets side to middle and produced rag rugs and knitted gloves and children's cardigans while making pastry and cakes at the drop of a handknitted hat.  My generation turned their back on those things because we needed to get out of the house and into the world.  I'm glad I did get out there but I look at the demands on younger women now and I see that they are working so hard both inside and outside the house that we cannot yet begin to say we have got it right.  And some younger women have turned back to the house, choosing to stay home to care for their children and embracing once again some of those traditional women's skills.
Can we do both, carve a professional life and knit socks?  I would like to think so but I wonder if that is just asking too much of one woman in one day.  I am sort of doing both by doing them sequentially rather than all at the same time but I wonder if there is a better way.  Can we have our education and our jobs and our place in the world of work and still honour and practice some of the skills of our mothers and grandmothers?  What do you think?
I can't tell you how much I enjoyed making my socks.
feminism knitting socks women and work