- July 25, 2012
Sometimes things happen which make you pinch yourself.  Having our shepherd's hut is a bit like that.  I can't quite believe that something that I have always loved but have always thought was the kind of thing that belonged to other people now belongs to me. 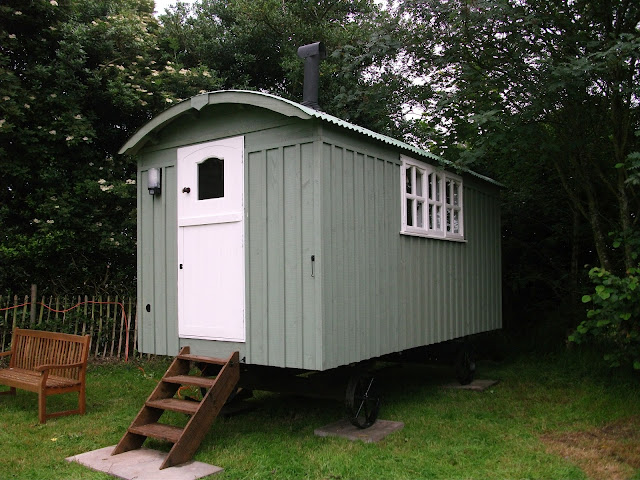 The idea has been germinating for a while.  When my father in law came to live with us we converted the room which had been my study into a bed-sitting room for him.  I need to be careful here because Ian's study is and always has been a four foot square porch which is crammed to overflowing and so cold in winter that he needs to wear sheepskin boots to sit at the computer!  But I did miss it.  There was no other sensible option for accommodating my father in law and now the room is in constant use as opposed to the couple of hours a day when I used to sit at the desk, working, blogging or reading because the light by the window and the view are both good.  So it is a good thing that the room is now always warm and used but I have sorely missed the space of my own with my own pictures on the walls, my own bolthole.

It's a funny thing, spaces and territories.  Do other people do this?  In our family the kitchen is shared territory for my husband and me, so is the sitting room and our bedroom.  The tiny study/porch is Ian's, squashed as  it is.  The spare bedrooms belong to no one although I am slightly more likely to engage with them than Ian is, changing beds and putting in flowers and clean towels for visitors, polishing mirrors and making the rooms welcoming.  Mostly they are neutral territory although now that I have carved out a sewing space one of them is beginning to feel like a place in which I have a toehold.  It doesn't feel like my space though as its primary use is for visitors.   Outside, the metal greenhouse where the work of sowing and propagating and growing tomatoes is done is shared space while the cedar greenhouse, which houses the scented leaf geraniums and is more of a sitting space,  is mine.  The workshop is Ian's space and so is the new barn.  Even the garden has its different areas.  Most of it feels like shared space but the chicken area has become more of Ian's place while the side garden and the native tree walk which I have created and which I look after are mine.  If you don't do this it will sound odd so I hope I am not the only one!   Of course it is all ours, but it doesn't all feel the same.

If you add to the sense of having a space of your own the irresistible lure of time to yourself you can see why men have had sheds and women have had sewing rooms for generations.  The fact that sheds and studies, stillrooms and sewing rooms serve a practical purpose provides the acceptable reason for having them, but really the attraction is that space where you will not be disturbed, where you can organise things as you like, where the clatter of other people is silenced.

I have talked about the attraction of this kind of shed space to a variety of people and find that some share my love of the place of one's own entirely and without explanation while others don't quite get  it - yes, they understand the practical function but they don't really see the emotional pull.  In my entirely unscientific survey (i.e. twenty or so of my friends, acquaintances and family)  there are slightly more women than men in the "get it" camp.  This may prove nothing at all or it may, as one friend suggests, be something to do with the fact that men are better than women at cutting off so women need real time alone to find a breathing space.  Maybe some people are simply more sociable than others.  I have no idea.  I only know that I feel more like me with time to myself and a place to have it in.

So the hut.... It was made for us by hutsnstuff , a father and son business based on the Powys/Shropshire border.  They make the huts to order so you can have what suits you.  We have seen them building offices and b&b accommodation and we knew we wanted something which would be versatile enough to be a little of both: a writing room and an occasional spare bedroom when the house is full of family and friends. 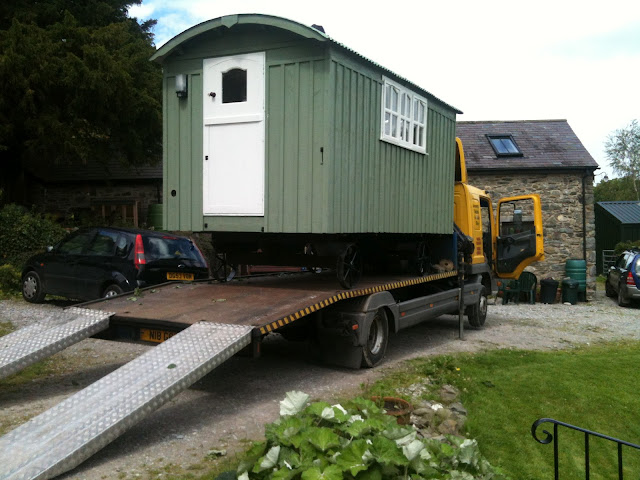 It arrived on a truck the day I went with Karen, Jane and Michelle to the RHS show at Tatton so I was not here to see it being installed in the top corner of the field.  Ian took this photo as Dave and John Gregory arrived and then unaccountably there are no more.  I take this to mean that all hands were required! 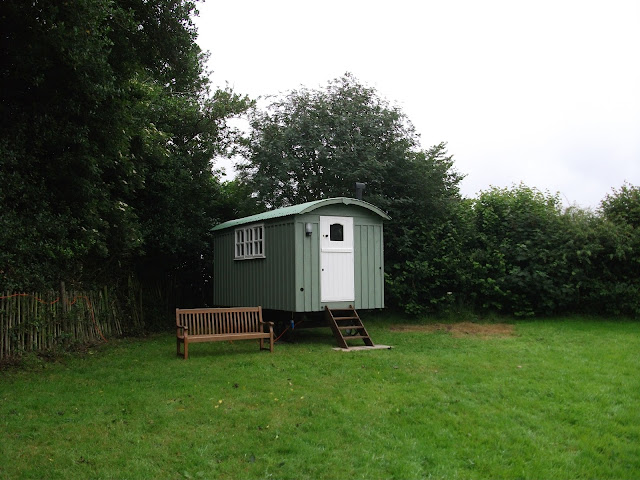 But by the time we came home from Tatton there it was in the corner of the field, looking like it had always been there! 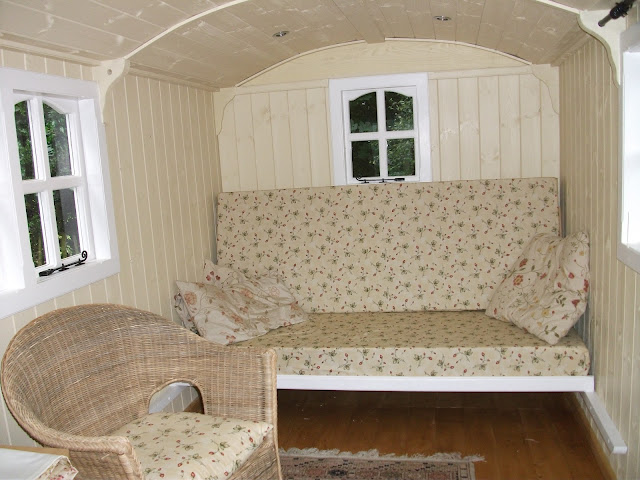 Inside the first thing to do was to install the mattresses, laboriously covered last week, onto the sofa bed and start to move the furniture in. 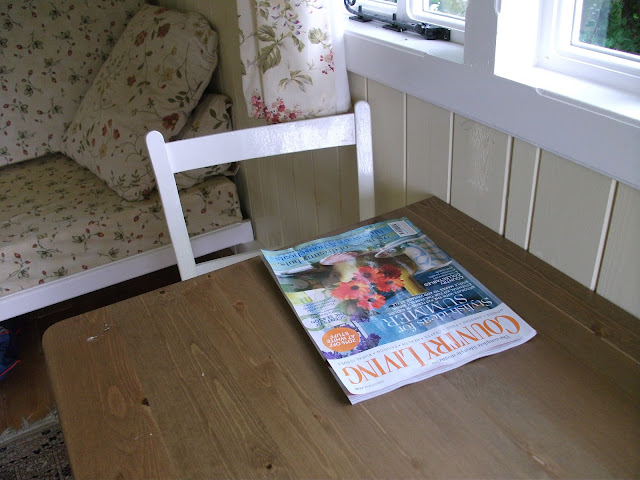 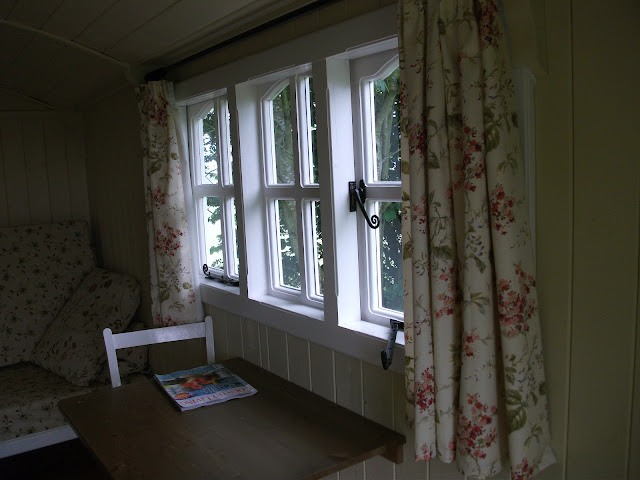 The curtains went up. 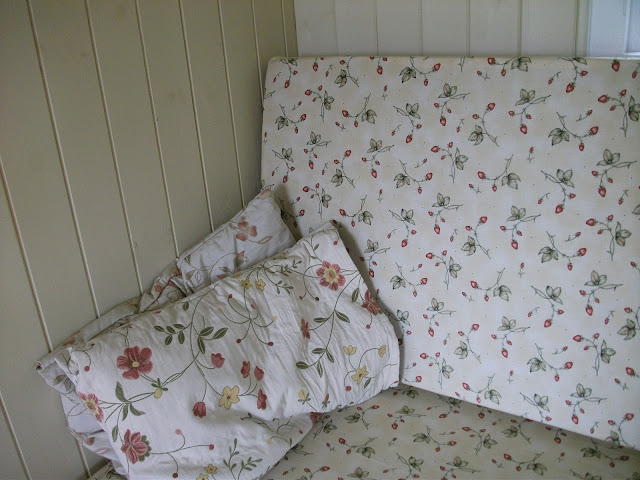 The cushions went in. 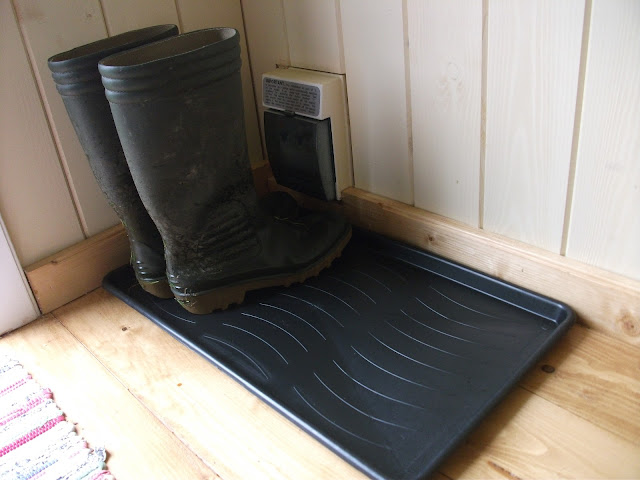 The welly tray is by the door. 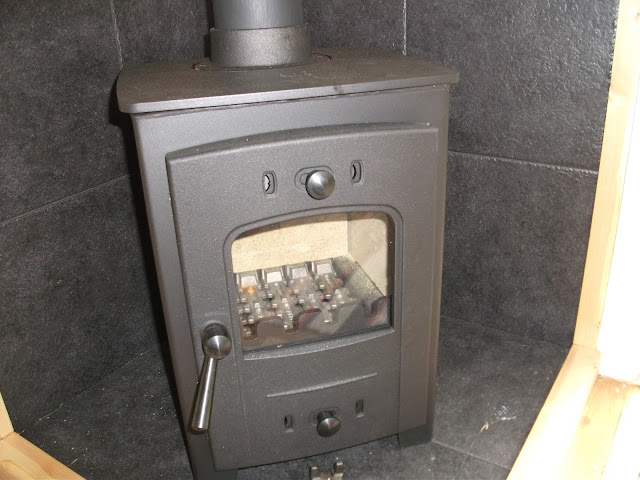 There is a little stove to keep the place toasty in winter.

And just because you have a room of your own doesn't mean you don't want to share it sometimes with those you love. Last night we slept in the hut and christened it with a bottle of fizz. 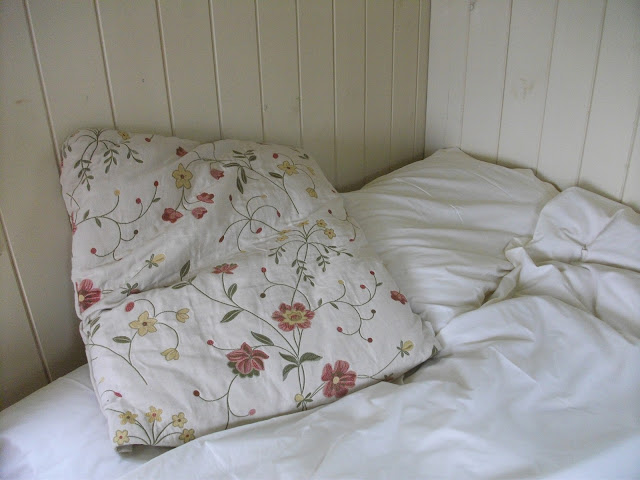 Thank you to all sorts of people, to Dave and John for building it, and to Ian for finishing things off and, most of all, for getting it.
a room of one's own hutsnstuff shepherds hut