Showing posts from December, 2008
Show All

What is out on Christmas Day? 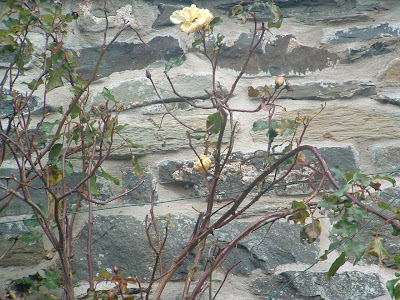 A brave yellow rose blooming against the cottage wall. The hammamelis mollis. Every year it takes me by surprise. For weeks it is an undistinguished little tree in the corner of the field and then one day it is full of gorgeous spidery blossoms with a clear sweet scent. The new White Wyandotte hens out for a scratch and a wander. A tiny pink flower on the scented geranium, protected by being just under the canopy of the yew tree on the edge of a sunny wall.
25 comments
Read more

- December 17, 2008
Christmas again and how am I doing? It has galloped towards me over the last few days. I like a balance between being prepared (so as not to be too frantic) and having things to do (so as to have what frances calls "a bit of Tizz"). This year there has been too much work and procrastination and not enough preparation so I am skating towards it in a slithery out of control rush, consoling myself that on Christmas Day it is just the two of us this year so I can save the major planning for a houseful at New Year. But here is the list of things to do: Cake - made but not iced although this morning I doused it once again with brandy. The kitchen smells intensely alcoholic. I have also been faffing around today trying to find my favourite recipe for marzipan. For years I thought I hated marzipan but eventually discovered that what I hate is shop bought, over sweet for me marzipan. The home made stuff I adore. So that is another job, but one well worth doing. Puddings - m
24 comments
Read more

- December 11, 2008
Eliane who writes a blog about all sorts of matters close to my heart (chickens, wood burning stoves, food) has tagged me to write six interesting things about myself. I think I was tagged to do this one a little while ago now and I suspect I used up anything even close to interesting then but I have had a go at some not terribly interesting but individual things. My absolute favourite food, the thing I would have if I had to choose one thing to eat for the rest of my life, is Ian's homemade bread with far too much salty Welsh butter. It has to be homemade bread and real butter. I remember my grandmother giving me pieces of butter to eat like cheese when I was a child which perhaps accounts for my passion for it now. Anyone seeing one of my doorsteps for the first time tends to do a double take and sometimes I hope that, if I whisk the plate away before they can get a good look, maybe they are still thinking that the slice on my bread is cheddar. When I was about fourteen an
20 comments
Read more

Chickens and the cycle of life (not for the squeamish) 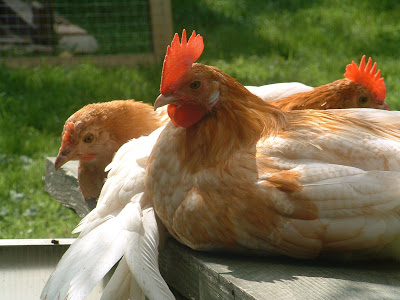 I feel it is time for a chicken update. We had friends staying last Friday night and in the morning my friend and I went to let the chickens out. It was cold but bright and still, the sky blue against the bare branches of the apple trees. As we went into the kitchen garden I thought I could see the two older chickens, who have a separate chicken house, out in their run. Odd, I thought, and odder still that they should be lying down. Everything said not right. The bodies of the hens lay in the run, decapitated. Rob opened the door and reached in. The breast meat had been taken from each. Rob is a countryman. "Stoat," he said. "Stoat or weasel." "But how did they get in?" They must have squeezed their way under the floor of the house. All around the outside of the run was protected with a chicken wire skirt but we had not thought that anything could gain entrance through the tiny space under the house itself. We picked them up and took them to the bo
25 comments
Read more
More posts