Showing posts from July, 2019
Show All

- July 04, 2019
It is six months to the day since I started couch to 5k.  So how has it been?  Is it worth doing?  Am I still running?  Have I lost two stone and become an elite athlete? Er, no to that last one. I am still running and to my surprise I really enjoy it now.  When I was going through the programme I always loved how I felt afterwards but I often struggled with the runs themselves.  It was hard.  My legs sometimes worked when my lungs didn't want to.  I kept going through the nine weeks of C25k as much because I am stubborn as for any other reason.  I didn't want to do it sometimes but I didn't want to give up more. Couch to 5k is a bit of a misnomer I think.  When I got to the end of the nine weeks I was astonished and delighted to find that I could run for 30 minutes but I was nowhere near being able to run 5km.  My first 5k was my first park run, six weeks later.  It took me 46 minutes and I was absolutely amazed that I could do it but oh it was hard!  But here I am, si
6 comments
Read more 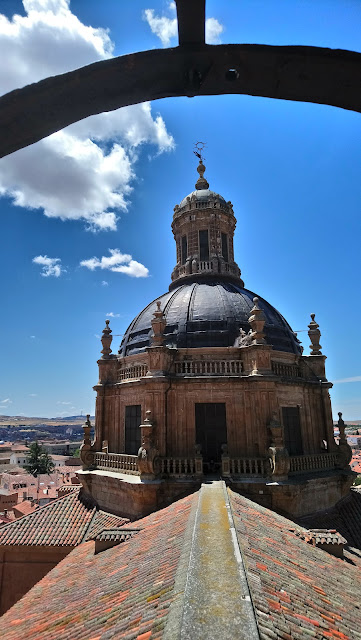 Life in a campervan is a pretty close quarters experience.  It is a small space.  If there are two of you sharing it you come to know where to put yourself, when to sit, when to go out of the van, how to move around so that you don't spend your time falling over each other.  After three weeks travelling in the van in Northern Spain Ian and I had got very good at it.  We had also spent most of our waking and sleeping moments together so it was strange to hoist my rucksack onto my shoulder and turn my back on him to find the apartment which would be my home in Salamanca for a week while I did my Spanish course.   Ian was going to drive home to Wales through Spain and France.  I didn't watch him go.  I was too busy wrangling my bags into the tiny lift. I had decided to do another intensive week in the hopes of boosting my Spanish.  I seemed to have stalled frustratingly at a level where I could read quite well but struggled with speaking and listening.  Hoping to get every possi
12 comments
Read more
More posts