- January 02, 2010
For the last two weeks the house and the cottage have been full of people.  Younger son's dog (possibly the best behaved and gentlest black lab in the world until you tell me different) has been lying on the rug by the fire.  Elder daughter's baby has spent the fifth and sixth weeks of his life being passed around his various adoring aunts, uncles and grandparents.  There has always been someone to walk around singing to him when he got cranky and to sit with him sleeping on their chest.  He has been fascinated by the pattern of the beams on the ceilings in both the kitchen and the sitting room of the farmhouse, staring up wide eyed at the lines of the brown oak against the white paint. 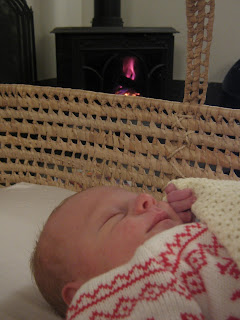 Much food has been made in the battered kitchen, with first younger son and daughter in law, and then as younger daughter arrived and they left, younger daughter, working with me, sometimes taking over completely, sometimes being the vegetable peeler or the gravy maker, working away companionably.  We like food in our family, like growing it, cooking it, thinking about it, talking about it, eating it.  Much wine has been drunk too, though in a pretty moderate sort of a way, and much chocolate eaten.  We have walked the dog and crunched about in the snow. 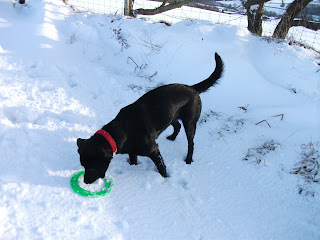 And today everyone has gone although we have visitors coming to the holiday cottage tonight.  The silence, after all the noise and laughter and coming and going, is profound.  All I can hear is the sound of the logs burning in the stove and faintly, from Ian's study, the clatter of the keyboard as he uses the computer.   On New Year's Eve we had a fire out in the field.  It was a full moon, once in a blue moon, and the moonlight on the snow was eerily bright, a silver gray world glowing and gleaming like a great frosted bowl.  It is not as bright as that tonight but the world still glows faintly white with the moon on snow.  I am torn between my usual pleasure at having the place to myself and the tug of yearning to have my family back.  By tomorrow I will be used to it again and it will be good to have some time just the two of us but tonight I am missing the laughter of the girls, the feel of the baby settled against my chest, the sound of my husband and son in law talking from the kitchen, the easy going presence of the dog, curled by the fire.

It has been a good couple of weeks stolen from the world. 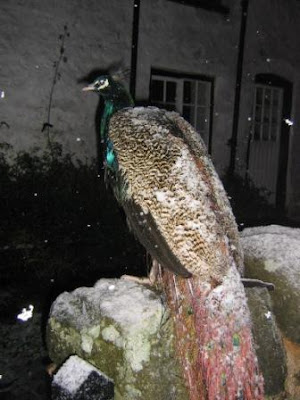 Here is the peacock, remarkably tolerant of the snow, making his contribution.