Keeping chickens - the dark side

- June 09, 2011
I love keeping hens.  I love the eggs, brown and speckled with vivid orange yolks and a taste which beats even the best shop bought free range eggs.  I love the way they are a presence in the garden, rushing and clucking and shouting to each other and bustling about.  Watching them always makes me smile and the garden would feel empty and dead without them, although it might be quite a lot tidier. 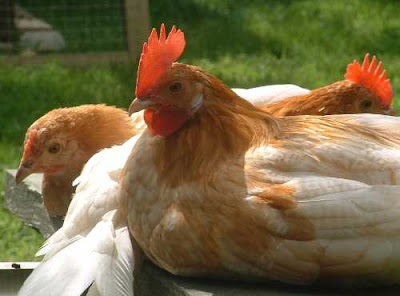 But it's time to lift the veil on the less pleasant side of chicken keeping.  Those of a squeamish disposition should look away now.

One of our older hens is a Welsummer, a dark brown hen who lays dark brown eggs.  She was given to me by a friend because she was being mercilessly bullied in her flock and my friend wondered if a new flock would let her have a new start, a bit like sending a bullied child to a new primary school!

It took her ages to settle in when she came.  She didn't seem to be bullied here, partly I think because she clearly knew her place in the pecking order from the first: right at the very bottom.  But she didn't join the flock at all for days and days, loitering forlornly by the hen house, then gradually following the others several yards behind, like a child hanging around on the edge of a playground group.  Then one day I looked out of the window and there she was, steaming up to the bird feeders with the others as if she had always been  part of the group, right in the middle of the scratching and clucking under the trees, putting herself to bed at night with the others and taking her place on the perch instead of the floor of the hen house.  She had cracked it.

Since then she has taken her place as one of the boldest of the hens, moved smartly up the pecking order and is now the first to invade a newly dug vegetable bed and to scratch around my seedlings before I have managed to get the barriers in place to protect them.  She often gets a clod of soft earth tossed in her direction to make her move out of the way.  She lays four or five eggs a week and I choose to have her eggs if I am breakfasting on boiled eggs and toast soldiers because the colour is so fine, dark brown with even darker brown speckles like rich plain chocolate.

Last week when my son and daughter in law were here we went down to let the hens out for their afternoon of foraging and free ranging.  There was something about the way the Welsummer was standing that was  not quite right.  She came more slowly out of the run and when she headed off up the garden I could see that her rear, instead of being covered in deep downy brown feathers, was streaked with yellowy white and hanging with dark brown faeces.  Chris and Katie had just lost one of their first ever hens to maggot strike (don't ask, it's just as horrid as you might think it is) and had been told by a vet friend how important it was to clean up a hen with this sort of problem.  We agreed that evening when hens are more docile and dopey might be the time to do it and went off to consult books and internet advice.

It seemed that she might perhaps be egg bound.  Graphic pictures showed prolapses and articles described bathing the hen's backside in warm water and greasing the vent with vaseline.  We raised our eyebrows at each other.

That evening there was football on the television which is certainly the only reason that our menfolk were conspicuously absent as Katie and I, all gloved up and with a jar of vaseline in my pocket, set off down to the hen run.  The hen wasn't keen to be taken off her perch but once firmly grasped the frantic clucking stopped and she sat quietly as I clamped her wings equally firmly to her sides .  We took her up to the utility and ran a sink of warm water.  Then I held her and  lowered her in while Katie gently tried to clean her bottom.  She did indeed have a prolapse.  Katie used her slim fingers and her medical training as a junior doctor to gently push things back in place.  I am not sure how you can tell that a hen is not keen but co-operating, it certainly isn't the expression on her face, but that is how it seemed.  The hen was quiet.  She didn't struggle and we bathed and greased her and kept her in the warm water for a while.  Then it was out onto an old towel, an attempt at drying her wet feathers (have you ever tried to dry a hen?  I think a hairdrier might be the answer) and then we installed her in an old cat basket for the night.  The books said she should be isolated from the other hens who might peck her in her weakened state.

We did try to isolate her but our efforts were scuppered by a quietly inquiring visit by the dog which sent the hen flying off into the mock orange bush, refusing utterly to come out.  When the other hens were let out in the afternoon the Welsummer rejoined the flock and we left her in peace with them back in the hen house for the following night.  The next day she spent a long time in the nest box, finally laying a large, slightly misshapen egg which was delicious poached on toast for my breakfast.  For a day or two she continued to look a bit bedraggled in the rear but now, a week on, normal service is restored, the feathers are clean and downy once again and she is laying to her usual pattern.

One of the things I read in my poultry books indicated that an egg bound hen in a commercial flock would either die or be culled.  That seems a pity.  But I am glad I had company on the night of the latex gloves and vaseline.  Thank you Katie.
chickens egg bound hens