- July 17, 2011
I have just had a week out of time, a week to wander gardens in great company, a week of sunshine and flowers by the ton.  My head is still spinning with colour and light and fizzing ideas.

Way back in February when I planned a visit to some gardens in Devon the idea seemed like a lifeline.  Life was hard, my brother was in hospital, we were all adjusting to having my father in law to live with us and I was buffetted by how much I wanted to be able to put things right and how little I could do.  As I sat at Karen's table on a wet and blustery winter day I felt stretched out thin like an old handkerchief, pale and see through and just as likely to tear.  On a July morning as I left home in the sunshine life had moved on.  We adjust, we human beings, we get used to things, even difficult things.  Now it felt not like a necessity but like an indulgence to drive away and leave Ian looking after domestic life and his father.

I was travelling with Karen and staying with one of her oldest and best friends who lives in Devon and has a fabulous garden of her own.  It was a long and tedious journey down the border with England, via Chepstow briefly to see my brother, and on through Somerset and into Devon.  One of the great things though about newer friends is that there are all sorts of things you don't know about each other so the journey passed away in filling some of those spaces in the jigsaw of an unshared history.

I had wondered whether I would feel rather in the way when two such good friends got together after a long time but L and her husband were so welcoming and somehow it all felt very easy and natural.  L has made a stunning garden in not much more time than we have been here.  Mine feels very much a work in progress in comparison.  I loved her planting, particularly a very beautiful spiral garden, and consoled myself by observing that her soil and mine could have come from different planets.

A day out to spend with my parents and catch up with my sister and then a day for garden visiting, starting with Glebe Cottage, Carol Klein's garden and small nursery in North Devon.  It's always a surprise somehow to visit somewhere you have read about and seen on television.  Television in particular plays tricks with space.  Just as the newsreader you see unexpectedly on the street in London is often surprisingly short, the garden was surprisingly small.  First impressions: packed (maybe overpacked? and that is an odd observation coming from me) with paths so narrow and planting so full that you squeeze through and bend under branches and would be soaked to the skin by plants after rain. 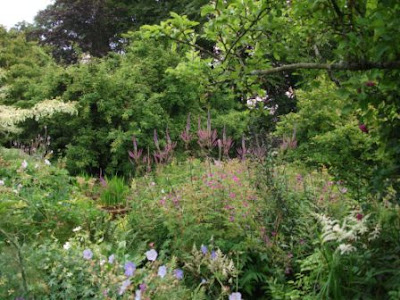 There is a generous amount of the garden open: a wooded area which must be fabulous in spring where the clumps of epimedium are like huge piled pillows of plants.  I tried hard not weep when thinking of mine, sitting daintily about six inches square in their bed of bare soil. 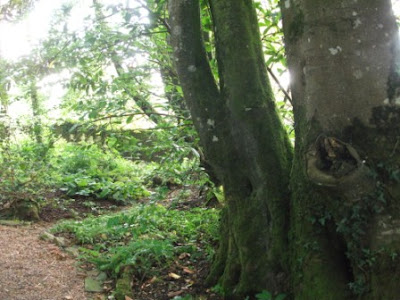 To the other side of a central path, terraces take you up towards the house, through Alice's garden and Annie's garden towards the big beds where I think the hot plants will go out in another few weeks.  On the top terrace, beyond the private sign, were pots full of cannas and dahlias wating to go out.


There were some inspired bits of planting 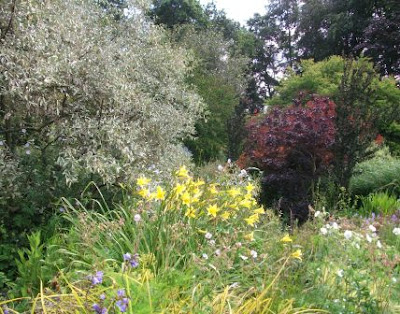 and an inspired use of zinc buckets! 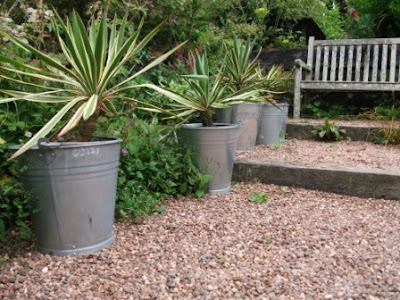 And there were some very beautiful individual plants which got under my skin to the extent of coming home with them: 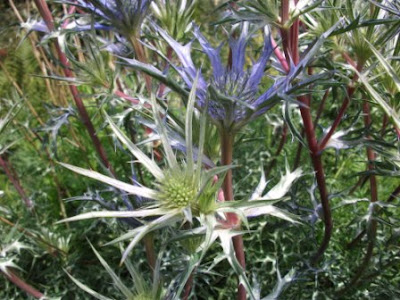 It was a pale soft morning, gently overcast but warm with the promise of sun to come.  I was very glad to be there, looking and thinking, in sparky and knowledgeable company.  It felt like a very personal garden and although we didn't see Carol Klein, the woman weeding in the borders and the other taking plant sales in the nursery clearly loved the garden and knew and loved its plants.

I liked the fact that, although there would have been vast scope for making a money making enterprise out of the garden and the nursery with tea rooms and bookshops and a greatly extended plant sales area,  there was a strong sense that this was not what they wanted to do with it.  Signage was minimal, although there was a helpful sign pinned to a telegraph post at the point when satnav insists you have reached your destination and you clearly haven't.  There were no loos.  The plant sales area was tiny.  There was no tea room.  There was nowhere selling copies of Carol's books.  It was just a garden, her garden.  I liked that.
carol klein Devon garden glebe cottage