- April 26, 2020
For some reason this has been a quieter week.  Perhaps we are getting used to being confined?  Somehow I have done less.  Perhaps the Protestant work ethic of filling every moment with activity, which used to be my default approach, has been smoothed out by the sense that the days pass whether I fill them with Welsh and Spanish and yoga and gardening and reading and communicating with family and friends, or not.  So I seem to have settled to a pattern of doing a bit less, getting up a bit later, spending longer over a cup of coffee or a wander around the garden, more watching the birds, accepting that if I have the structure of my Spanish Skype calls or my Welsh Zoom class, I probably won't also spend much time at the computer doing on line learning.  The garden continues to take a lot of time and Ian has made real inroads on clearing the fruit bed, which had been determinedly returning to the field from which it came, and emptying a raised bed ready for planting out the peas and beans in the greenhouse.  I have been clearing brambles and nettles when I am feeling strong and deadheading daffodils and moving seedlings when I need something a bit less energetic to do.  I have also been making sourdough bread.  Normally it feels as if it takes too long and wants me to be in the kitchen doing something when I want to be out in the world doing something else but right now I am going to be here anyway so tinkering and experimenting with the natural yeast starter and rising times and cooking time seems an easy thing to do. 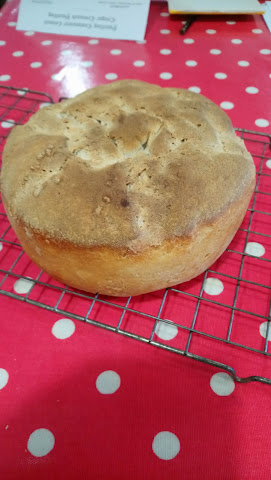 I haven't yet achieved artisan bakery appearances but it tastes fantastic.  In fact sourdough bread, by itself, may be the reason I have put on four pounds since the lockdown started. 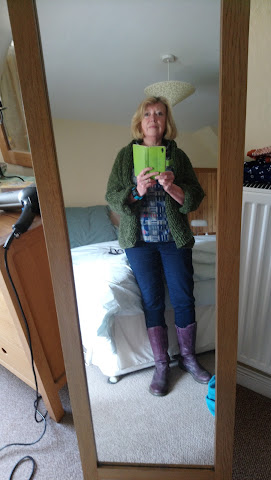 I have also finished the jacket which I put to one side in 2012.  I am quite pleased with it although it is truly a winter jacket and with luck won't get much wearing over the next few weeks.  Now I have another request from four year old granddaughter for a summer dress for her baby doll so that should keep my hands occupied for the coming days.
I find myself thinking about what I want do if and when this lockdown is ever lifted.  There is an interesting tension in the press and on the television between the demands of the economy for a restart and the sense that, in the absence of ideally a vaccine or at the least a wide spread testing and contact tracing programme, a relaxation might be followed by a second wave of infections.  My own thinking is that the pressure for a release of lockdown will lead to some sort of staged programme of lifting the restrictions but I can't imagine a return to anything like normal life until or unless there is a vaccine.
But what would I like to do if I could go out?  I think this is on my mind because I have been learning this form in Spanish:  ¿si pudieras salir hoy, qué harías?  "If you could go out today, what would you do?"
Well there are big things and little things.  The big thing is to see our children and grandchildren and to laugh and hug and have a child on your knee for a cuddle.  Our children and grandchildren are spread out over the country so if the lockdown were lifted entirely tomorrow it would still take us nearly a week to get to everywhere and see everyone.  But that is the big thing which cannot be thought about for too long because it is not possible.  Suppress the thought, steady the heart, calm the breathing, one day at a time.
But there are the less huge things which come tumbling out in a cheery line, waving and shouting "Pick me!  Pick me!"
A cup of coffee and a newspaper in a coffee shop, watching the world go by.
A drive to the sea to sit on the sea wall with an ice cream, watching the tide moving on the sand.
A meal in a pub or dinner with friends round a table full of conversation.
A choir rehearsal in full voice filling the church with sound.
The gentle sociability of a Pilates or yoga class.
The deep Devon lanes, studded with wild flowers.
Driving up and over the Denbigh moors, the road climbing ever higher and and west to the mountains and the sun shining on the Mawddach estuary.
And I haven't even got further from home with a train or a ferry and the delights of travel.
But for now I will go and make Ian a cup of good coffee and sit outside with it watching the swallows swooping over the stone pigsties.  Later I will facetime a daughter or son.   I will make a carrot soup and work in the garden.  I will read "The Diary of a Provincial Lady".  And for dinner we will have roast chicken and afterwards we will light a fire and have a glass of wine.  One day at a time.
How about you?
coronavirus diary

- November 19, 2019
I was astonished to find when I came back to my blog yesterday that it has been more than three months since I blogged.  In fact my Spanish friend asked me this morning if I only blogged in the summertime!  So many reasons:  busy with family and with selling the house (which is progressing but slowly) and the easy lure of Instagram which makes you feel you are connecting with people without the need to sit down and really think and write.  But I would miss it very much if I stopped so here is a download of what is in my head this cold and windy Tuesday up on my North Wales hillside.

Gulp.  Well I have somehow gone and done it and committed to doing a 10k run in Chester in March.  At the moment the idea of running for 10 kilometres is quite as daunting as the idea of running 5k was back in January when I started to try to learn to run using the Couch to 5K programme.  I have been idling along for the last few weeks, running a bit less because of a problem with a sore hip, trying not to…
Read more