- June 14, 2020
What's new here up our hill in North Wales? Not a lot.  Last week we had a socially distanced cup of tea outside in the garden with some friends.  On Friday we bought take away fish and chips from our local cafe, brought it home and had a post fish and chips zoom call.  This was the first food we had eaten since lockdown which had not come out of our kitchen.  It is a good job that I generally like cooking.  On Friday lunchtime we sat down to listen to the First Minister's press conference, hoping to hear of some further relaxations to lockdown rules, only to realise that it is another week until the review date.  If we lived in England we would now be able to see our children and grandchildren, in a socially distanced way and outside, but here very local restrictions remain in place.  I don't generally have a problem with the slow and cautious way in which Wales is approaching its lockdown rules, indeed whether you agree or not, there does seem to be a more coherent and planned approach here than in England where the pressures to reopen the economy and the pressures to contain the outbreak are clearly at war with each other.  But on a purely personal note, I have had enough now.  I can manage without shopping and restaurants and pubs and sport and travel and many other things which make life entertaining, but I want my people. 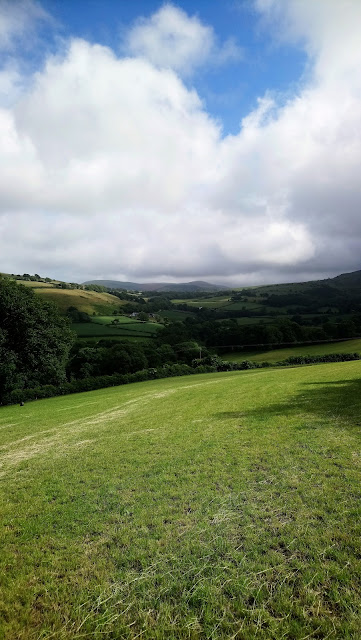 So, casting around  for something to give the weeks point and purpose and to lift the mood, I have decided to return more seriously to running.  In January last year I started Couch to 5k, the programme designed to take non-runners from inactivity to running non-stop for thirty minutes.  I was sixty four, a bit overweight and I had never been sporty.  At school I was the girl sunning herself behind the tennis courts who had skipping games off to a fine art.  When we ran cross country I knew exactly where to disappear into the trees to have a dream in the sun for half an hour before rejoining the race at a point where I would arrive back at school at least a tiny bit warm and redfaced.  As an adult I discovered a love of walking and I have always liked being outside.  It was organised, competitive sport which left me cold.  So I am not entirely sure why I started couch to 5k except that I felt old and tired and slow and thought it would give me a kick up the pants.  I probably wouldn't have started at all, despite all that, had it not been that Ian had committed himself to running the Cardiff Half Marathon in October 2019 and C25k was his starting point.  I must have said that I would do it too.
Here is my blog from the very first time that I tried to run following Couch to 5k.  It is a great programme.  I managed to do all the nine weeks and finish it and then a couple of months later I managed to run 5k at a parkrun, very slowly, but I did it.  And somehow, rather to my surprise I seem to have become a runner.  For ages I was embarrassed to call myself a runner because I was so slow.  Surely runners are younger and fitter and faster than I am?  But after six months or so of regularly running three times a week I decided to take the view that a runner is what I am, still slow, but a runner.  Since then I have run by the Arno in Florence, on the Galician coast and in Salamanca in Spain, in Dublin, Devon and South Wales.  The culmination of running to date was running the Chester 10k in March, just before lockdown started.  I really didn't think I could do it and I was astonished and over the moon that I could.  And then the world shut down.
Lockdown has been a challenge.  The first couple of weeks were an emotional challenge.  I seemed to be using all my energy to adapt to our new reality and to keep my equilibrium.  I really didn't want to give up running because I know how much determination and commitment it has taken to get to this point and I was pretty sure that if I let it go I would struggle to do it again from scratch.  After a couple of weeks Ian and I began to walk up our hill (pretty steep for running for a runner like me) and run down.  Then Ian persuaded me that the thing to do was to combine running and walking from the house and to try to improve my time.  Every minute or so of improvement was evidence that I had run uphill for longer rather than walked, that I had run downhill faster.  Lockdown restrictions in those early weeks required us to exercise from home so all my usual training runs were off limits.  I found it hard to get into any kind of pattern with it but I did manage to get out a couple of times a week, sometimes with Ian and sometimes on my own. Every time I went out it was an effort but I felt that I was at least hanging on to some of my hard earned fitness.  Sometimes, as I ran down with the wind in my face and the valley spreading in shades of green around me, it even felt good.  The runs were shorter than I had been doing but at some point you hit the steepness of  the hills at the top of our hill, of Penycloddiau or Moel y Parc,  and they defeat me, but at least I hadn't given up. 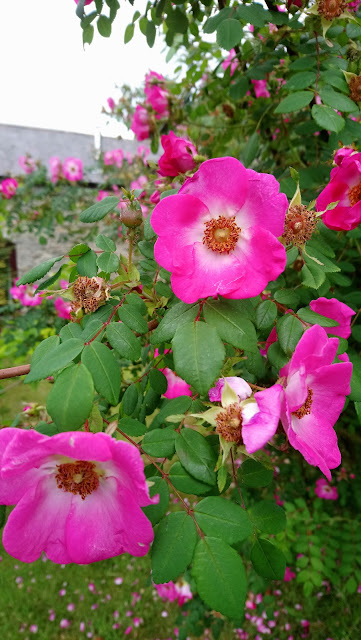 And now we are once more allowed to drive short local distances in order to exercise so this week I have run twice on my usual stamping grounds: once at Lady Bagot's Drive by the river and once in the back roads near Caerwys, my local small town.  It was good to be out again and I find that I have not lost my fitness, even if I haven't improved either.  I will take simply not having gone backwards in this strange and challenging time.
So I thought I would channel some of my frustrated energy into getting back to running three times a week, following a programme to get me back to being able to run 10k.  If you see me I will be the one with the tomato coloured face and the bright coloured leggings.  I am not competing with anyone so it doesn't really matter that I am slow.  I am running for myself, for feeling better and sharper, for proving to myself that I can stick to it however hard it is, for feeling more alive.  10k, here I come again.
coronavirus diary running