- June 27, 2020
Once again what coronavirus lockdown looks like in the UK depends on where you are.  Many more relaxations in England, to be honest so many (and none of them applicable to us in Wales) that I have lost track of them.  This has been accompanied this last week by some major disruptions. In Bournemouth in Dorset, in Manchester in the North West and at Ogmore in South Wales there have been large gatherings, parties and public disorder.  It seems like another world from our quiet rural life and it does not make me want to rejoin it.  Pubs and other hospitality venues will be opening on 4th July in England.  Death rates have fallen but are still in three figures.  In Wales we wait for the dropping of the "stay local" requirement on 6th July.  What will we do?  Where will we go?  I have tried to shut off from thinking about it.  I am sure we will make plans to try to see our children and grandchildren but for me the secret of a reasonably happy lockdown has been taking it a day at a time.  If I think and plan too much I will lose the ability to take pleasure in the every day and there is a whole week more to go.  Not looking forward doesn't come all that easily to me as I am a natural planner, generally with an eye to what comes next, but I have learnt to do it, a day at a time, sometimes an hour at a time.  It is a hardwon skill which I don't intend to give up. 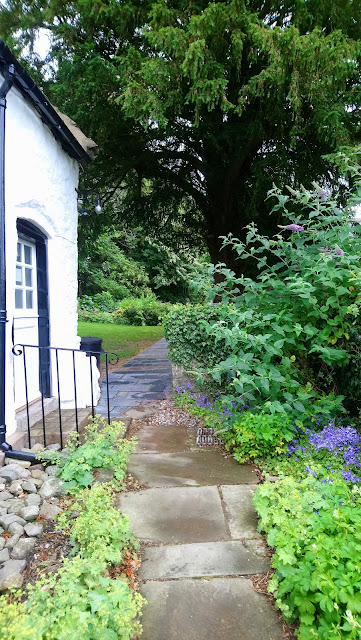 The garden has helped with this.  I have a shifting relationship with the garden.  When we bought this house we loved the place, we loved the view.  "It doesn't really have a garden though" I said to Ian.  "Make one then, " he said.  "Heaven knows, there is enough room. "
I don't know looking back how serious he was but over the last fifteen years we have made one.  For the first seven or eight years of living here I was quite obsessive about it.  I read widely.  I researched.  I made up plant lists.  I experimented.  I discovered that our soil was thin, stony and fast draining and just on the acid side of neutral.  Lots of things wouldn't grow but what would grow grew rampantly.  I found that bringing in plants when they were very small and growing them on in our conditions worked better than trying to get a larger plant, grown in softer circumstances,  to adapt.  I became adept at taking cuttings and propagating, partly because there is so much space that it made economic sense to grow our own and partly because propagating from things that were clearly thriving made for lots of happy plants.  I hugely enjoyed taking the long view in planting what would become big things: shrubs and hedges and trees.  Indeed the things in the garden which we have done which give me the most pleasure are the shaping and painting on the land of hedges, trees, boundaries, creating enclosure or celebrating openness.  I dreamed about it.  I wrote about it. 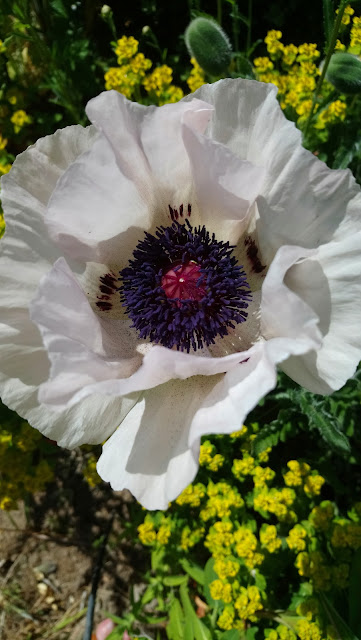 When my father began to develop signs of the Motor Neurone Disease which killed him in around 2012 my relationship with the garden slowly began to change.  I felt torn in two by the demands of caring for this place and for my father in law who had come to live with us and with the insistent pull of wanting to help, support and simply be with my parents.  They lived six hours away in Devon.  As I tried to increase the amount of time I spent with them the garden had to be put to one side.  In November 2013, out of the blue, my mother died of a heart attack.  All of the following year is a great blur of sadness and exhaustion as my sister and I struggled to find ways of helping Dad to cope.  MND ate him up, wiped him out, slowly and relentlessly erased all that had made him what he was.  My dearly loved father in law died that summer.  Ian and I drove back and forth to Devon every week, a six hundred mile round trip, Ian driving as his support to me.  It was worth it to see my father's face as we came in through the door of his room in the nursing home.  Especially as he lost  his speech it seemed as if only those like my sister and me and our good friend Bob could really connect with the person he was.  Carers, good as they were, had never known the athlete, the joker, the raconteur.  Ian could still make him laugh with a black humour when no-one else could.  Dad coped with amazing courage and all we could do was be alongside.   And to be alongside, which I wanted to do with all my heart, meant not being here.
The garden fell away into disorder and mess.  It was always meant to be a wildish rural place, a country garden with chickens and vegetables and an orchard and wild places but the bits that made it a garden disappeared into bindweed and nettles.  Grass took beds back to meadow.  The patterns and the structure blurred into nothingness.  Of course it did not matter in the way my mother and father and Ian's father mattered but often I could not bear to walk around it.  At some level it mattered to me.
Those two years of forced neglect of the garden between 2013 when my mother died and 2015 when my father followed her changed my relationship with the garden.  I had to disconnect from it and so I did.  When I began to climb out of the fog of exhaustion and grief after Dad died I did not fall back in love with the garden in the same old way.  I was wary of it.  I nurtured little bits of it, the side garden close to the house, the bed up by the shepherd's hut, but our children were beginning to have their own children and a rush of grandchildren arrived.  There is nothing like the death of people you love to make you feel that people are all that matter.  I could still take pleasure in parts of the garden but it no longer had me in its grip.   And that has been the way it has worked for the last few years.  The garden has become a backdrop to my life, with people at my life's centre. 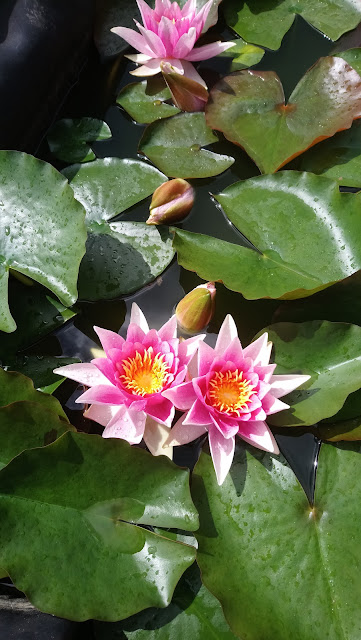 And then, at the end of March, came lockdown and a spring of glorious beauty.  There was nowhere to go and nowhere else to be.  Ian began sowing lots of vegetable seeds: courgettes and beans and chard and carrots and beetroot outside, tomatoes and cucumbers and salad stuff in the greenhouse.  Day after day of being here, really looking at the garden, caring for it and seeing its beauty became what we did with our time.  Caring for a garden is a bit like caring for a child:  the physical repetition in feeding and cleaning children, or in weeding and watering plants, makes you aware of every change and every nuance.  It attaches you.  Every day at some point I walk around everywhere, seeing what is in flower, pulling weeds, deadheading roses.  The garden has given these
last fourteen weeks point and purpose.  There is always something which needs to be done, which gives you a sense at the end of the day of having achieved something.  But there is also always something to be looked at or smelt, some reason to stop doing and just be.  The garden has helped me keep my equilibrium and given me moments of joy.  I am grateful for it. 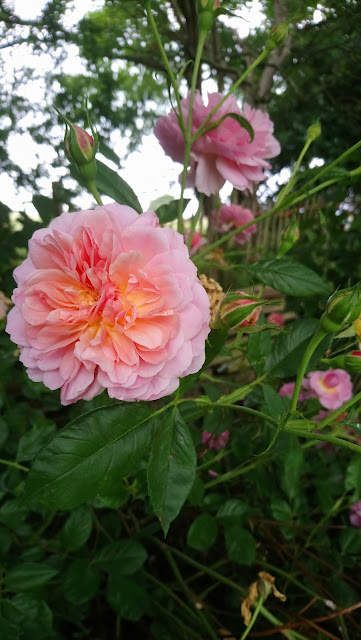 Thank goodness we didn't go into lockdown in November! 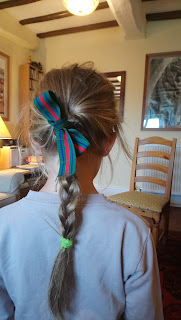 Well the nicest of reasons for not blogging for the last couple of weekends:  some time spent with younger son and his family.  They have three children under seven and two dogs, all pretty well behaved but nevertheless life was suddenly very full with all moments spoken for and "Grandma!  Grandma!" the rallying cry.  These are days you have to make the most of.  Our oldest grandchild is now a young man of fourteen, lovely and loving but living his own life with his own friends and enthusiasms, just as it should be.  It seems no time since he was three and insisting on sitting next to Grandma at the table, having Grandma put him to bed and read him stories.  So while there are stories to be read and games to play and children pursuing you around the garden - "Grandma, where are you?" - these are the days that lay the foundations for a life long relationship. So there is hair to be brushed and plaited and ribbons to be tied.  The youngest is a two year old little boy
Read more