- November 09, 2010
You may take for granted the daily round of hospital visiting, father in law's cheerful stoicism in the face of all that has been thrown at him, Ian's determination to do the best for him, the endless not knowing about what comes next. But life goes on too, oddly enough, and in other news.... 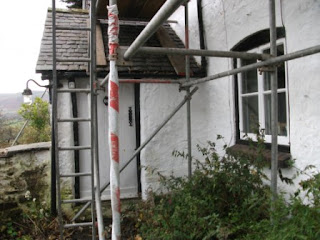 Scaffolding has gone up in readiness for the roofing job on the house.  The house looks strange in its metal exo-skeleton and I must admit to being a bit daunted by the idea of no roof and no roof in November at that.  It's a good job we have a great builder or the phrase "a bit daunted" would be an understatement rather than the truth! 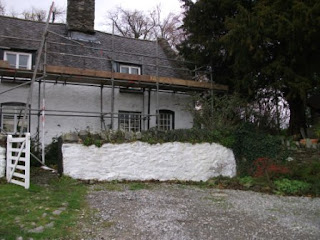 A ginger cat turned up on Sunday and is doing a lot of sitting determinedly on the step.  I've had this before when we lived in cities.   I never used to feed a passing cat in order not to encourage it to leave home but it's hard to know where this one has come from.  Our only near neighbours are at the farm and they say it isn't theirs.  A possible lead to a home half a mile away proved a false trail so we shall see if she hangs around for longer.  In the meantime I am feeding her outside, partly to protect our other old outside cat who is no match for a hungry young cat when there is only one bowl out there! 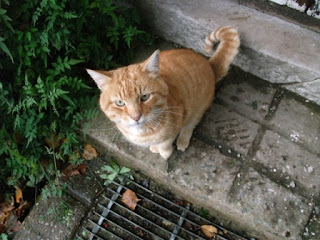 You'd have to admit, this is a handsome cat! 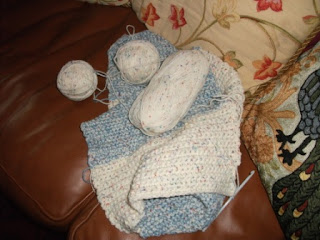 Years ago my grandmother taught me to crochet but it has had no part in my life since I was a teenager.  Casting around for something to do with the waiting time which seems a feature of life just now, I dug out a hook, messed about for half an hour with some existing wool, and then decided that I would make a start on a blanket.  Whether it is because the movement is quite a soothing one or because the amount of attention it needs it just right (just enough to keep you in the moment, not so much as to find yourself making stupid mistakes) I am finding it oddly therapeutic. 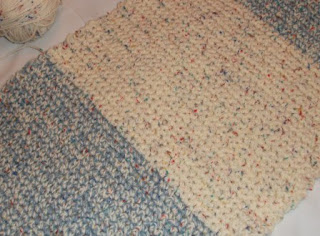 I have even invested in new wool now.  I have done a ludicrous amount since Thursday.  If you see a moving blue and white pile of wool in North Wales or the North West of England poke it and you might find me inside. 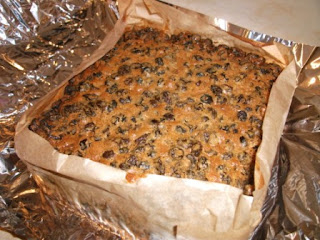 Yesterday I made a Christmas cake.  Whatever happens and wherever all the family are, Christmas will still come and we all like cake. 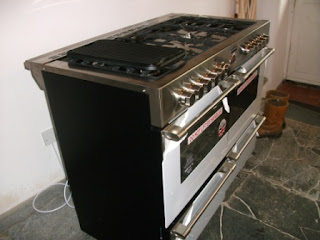 And my beautiful new range cooker arrived.  Just look at that!  I could dance with excitement.  The funny white stuff on the front is a protective covering so it will look like stainless steel when it is finally up and running.  That should be tomorrow.  Isn't life a complicated thing?
Christmas cake crochet hospitals range cookers