What's this? A blog which is not about walking!

- July 14, 2009
It seems so long since I blogged about anything other than walking so time for a general catch up.
It's four weeks since I got back. A week of frantic revision for my Welsh exam took care of the first week. The second week involved a flying visit to London to visit younger daughter and to see her new flat with her first garden, full of pots of flowers, tomatoes and strawberries and an unconscionable amount of ground elder. Week three brought elder daughter and her husband to stay. She is expecting her first child and struggling with sickness extending way beyond the traditional early three months. It was lovely to see them and to indulge my need to look after her a bit. By the time she went she was still feeling nauseous in the mornings but was a little less tired in the rest of the day and her voice had lost that thin, exhausted quality. Then we had friends to stay last weekend and people have been coming in and out of the holiday cottage every weekend. This weekend we have younger son and his wife coming for the weekend. The pleasures of a big family. I love seeing them all and the sense of people coming and going.

And what have I been doing in between feeding people? 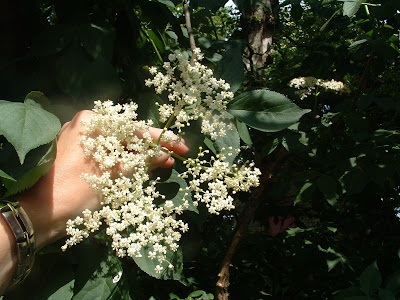 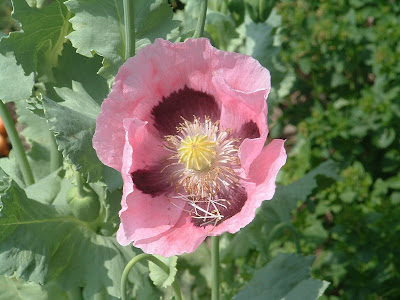 These poppies have been all over the side garden in such quantities that I haven't been able to decide if they are a weed or a blessing. Each flower is so lovely and fleeting and there are so many different colours - pinks and purples and sudden flares of red - and forms - simple singles and flamboyant doubles more like paeonies than poppies. But the foliage, a lovely glaucous grey, quickly turns brown and blotchy on the lower leaves and looks a real mess. I have not had the heart to pull them up so each has had its brief day of glory and then has been lifted before they have chance to set seed. They are not a week like creeping buttercup, nettles, couch grass and all the hundreds of other weeds which throng my garden. I may just have an embarrassment of riches.

I have sown more carrots and picked broad beans and peas and raspberries.

I have spent much time thinking about dieting while eating exactly the same as usual. I have looked after my grandson and taken my father in law visiting. I have done my yoga and loved it. I have booked to take my parents to see War Horse at the National Theatre. I have missed my walking but have had no time to do anything about it.

Time to concentrate on the summer. This will be easier if it stops raining.