Showing posts from November, 2008
Show All

- November 26, 2008
Elizabethd came up with the idea of writing about five special childhood memories. This was supposed to be on purplecoo but I got so carried away that I thought I had better move it here. Being picked up from school by my grandmother on a Monday. In winter she would wear her fur coat which I thought was the most beautiful thing I had ever felt. I used to sit next to her on the bus and rub my cheek against the sleeve. Sometimes we would go into town to the toy shop. It was unutterably exciting to know that she would buy me something, unlike the occasions when we passed by with my mother who was always saying "We'll see". I used to hug the excitment to me as we walked up the street. I never asked for anything because it was best to just look longingly and wait for the glorious moment when she would say "Do you like that, love? Shall I buy it for you for a treat?" Looking back they would be little things. I don't imagine a lot of money was ever spen
20 comments
Read more
- November 22, 2008 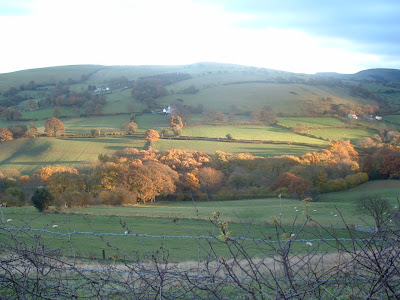 This was the light on the hill last week but now it has gone dark with all the suddenness of winter. Ten minutes ago I went out to lock up the hens and could still see in the gloom. Now it is truly dark and the shape of the pigsties and the bakehouse has disappeared into blackness. Across the valley a single light shines and the line of the hill is still just visible, deeply black against the nearly black sky. We have been collecting leaves today, not all the leaves, that would be as impossible up here as heating the world with a patio heater (hate them, such a stupid idea, why not go inside if you want to be warm, rant) but the leaves from by the bottom gate and in front of the pigsties and the bakehouse and those from the path in front of the house. Twelve bin bags full are stacked in one of our many out of the way corners, holes poked in the bags with a handy ash stick, and will slowly moulder into a lovely leaf mould for the hellebores and cyclamen. If only I knew where the cyc
30 comments
Read more

- November 10, 2008
A strange week this one. It began in London. I had stayed as usual in my daughter's flat and was going down to a meeting in the City. It was a busy time, the pavements crowded with people, queues waiting for buses, people on the way to work and school. I had that slight claustrophobia I get now in cities when I come in from my slower, greener and emptier part of the country. For the first day or so the city feels too full, too frantic. I was pleased to be looking out at it from the protective privacy of a taxi. The taxi stopped for traffic lights by a bus stop. There were three young teenagers waiting, a boy and two girls of about thirteen. The boy looked Chinese and was standing a little apart from the two girls, one black, one white, who were drinking Coca Cola and kicking at their school bags. The black girl walked up to the boy and began saying something. He shrugged and moved away a little. She followed him and backed him up against the wall, talking into his face.
34 comments
Read more

- November 02, 2008
It is November. How can you like one month above another? Months just are and without autumn there would be no spring. Each has its charms. All are necessary to the cycle of the seasons which I love. I tell myself this but I am aware that of all the months of the year there are two which lower my spirits: November and February. This was always the case and it is odd that, living out here where the seasons hit you in the face, I have not noticed any increase in my dislike of November, in fact perhaps the reverse. Here there is more to look at, more to notice and this is a distraction from the main cause of my dislike: the shortening days. November is the month when we turn to winter. October has been full of hedgerow harvest and turning leaves, gold and burnished when the sun shines. There are October days warm enough to take your cup of tea outside, even to eat lunch on the bench. Sheltered spots in the garden - the bank below the little quince tree, the herb bed by the wood
33 comments
Read more
More posts