Showing posts from September, 2010
Show All

- September 25, 2010
We have wheeled in the housesitters and tomorrow we are going to Provence for a few days.  It will be a ludicrously early set off.  I think leaving the house at 4.15am was mentioned but I had my fingers in my ears and was going lalalala at the time so can't be sure. There are so many things to do here.  The cutting garden needs weeding and sorting and the sweetpeas, having flowered their hearts out for months, are ready to be cut down.  The raised beds in the kitchen garden need clearing and composting and I am plotting new herbs, with the inspiration and encouragement of Mark Diacono's "A Taste of the Unexpected".  A fraught question this one, with the question of what is right for the house and the site balanced against the lure of the new.  Like Scarlett O'Hara, I shall think about it tomorrow, or even on Thursday.   The kitchen is groaning with apples and our daughters have both put in pleas for more apple based jellies, particularly ones to have on toast: a
22 comments
Read more

Sometimes I just think I am so jammy!

- September 24, 2010
This week a book arrived in the post.  Always a good thing.  I didn't pay for the book as it is a review copy which has also to be a good thing, although to be honest I would have happily paid and if you read my earlier review of Toby Buckland's book you will see that getting a review copy does not equate to unqualified adulation in the review.  I did  like Toby's book, mind, just not enough to buy it. This book is Mark Diacono 's Taste of the Unexpected.  Mark is the head gardener at River Cottage and in his own garden at Otter Farm he grows unexpected and delightful things to eat.  This book is an encouragement to us all to break out of the ruts full of potatoes and carrots in which we all plod and have a go at new and unusual fruit and vegetables. I can't review it yet because I am still reading it and probably will be for a bit because it bears close attention and I am still thinking about it.  This is unusual for me.  Normally I'm a bit of a skimmer a
11 comments
Read more

- September 18, 2010
I feel some lists coming on. Things I am doing at the moment which I am liking: Thinking about my garden. Taking great pleasure from having finally cracked how to make really beautiful piped cushions (instead of the "ok if you don't look at them too closely" cushions I have been making for most of my life). Reading Chris Mullins' fabulous political diaries, "A view from the foothills":   intelligent, thoughtful, wonderfully indiscreet and totally compulsive. Things which I am doing too much of: Eating toast. Driving about for work purposes. Procrastinating about sorting out my study. Things which I should be doing more of: Running. Moving things into my wildflower meadow, sorting out my cutting garden, planting up my pots with bulbs.  Basically I need to spend about two weeks in the garden. Going to the hairdresser. Well that is a way of simplyfying life.  What are your yes, do less, do mores?
34 comments
Read more

A visit to Bodnant Garden 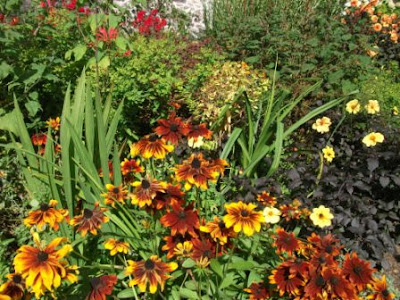 Bodnant garden is about thirty five minutes from here.  Membership of the RHS (or the National Trust) means I don't have to pay each time I go in so I go quite often, maybe three or four times a year.  I am most inclined to go in spring when the camellias and magnolias are out and crowds of daffodils wash up against the paths.  I have of course gone when the famous laburnum walk is in flower although that is not my favourite time: too many people and not enough time to meander and muse.  We went last week because Ian has never seen it and I wanted him to visit.  It is fascinating to find that the changing season changes your view of the garden and your assessment of it. Every year it is spring that really excites me and I have only slowly come to love an autumn garden but the main border at Bodnant was an absolute cracker, glowing with yellows, russets and oranges and making me smile at its glorious exuberance. On this narrow path you can walk along the back of the border and
32 comments
Read more 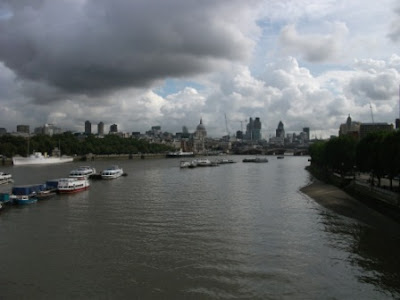 Lovely to catch up with my friend in London.  While I was there I managed also to read an extraordinary book, Joan Didion's "The Year of Magical Thinking", about the sudden death of her husband of forty years.  I have never read anything so intelligent, so thoughtful and written with such clarity and coolness about death and grieving.  Sounds as if it would be depressing but in fact it wasn't.  Fabulous. It was the most flying of visits, getting to London on Monday afternoon and coming back late on Tuesday morning using the cheapest trains I could find.  The tube strike was still on when I got up on Tuesday so I walked up from Waterloo, where my friend lives, to Euston station, taking my time, stopping once for a coffee and to read the paper, wandering, sauntering.  This is my part of London: Waterloo bridge, Westminster,  Fleet Street, Bloomsbury, all that area West of the City but not as far West as Oxford Street or the West End.  I went to university on the Stran
27 comments
Read more

Time for a trip to the city

- September 05, 2010
Tomorrow I am off to London to see the friend with whom I walked the Offa's Dyke path last year.  I thought I would come and go to London more often than in fact I have.  I managed a couple of trips while younger daughter still lived in London but now that she has moved out to Oxfordshire I haven't a base there and the months have whizzed by without a visit. I feel wholly out of touch with city life, weirdly out of touch for someone who worked in London and in Manchester for so long.  I think I look all wrong these days, all city polish long gone.  My hands are a total giveaway that my life now is spent in the garden.  My hair will need serious battering with brush and drier to stop it being a cloud about my head and I have absolutely no idea what to wear. When I worked in London I always wore formal suits.  I still have them lined up in my wardrobe and have occasional use for them in the more formal bits of my new working life: grey, black and navy suits with white fitted
12 comments
Read more 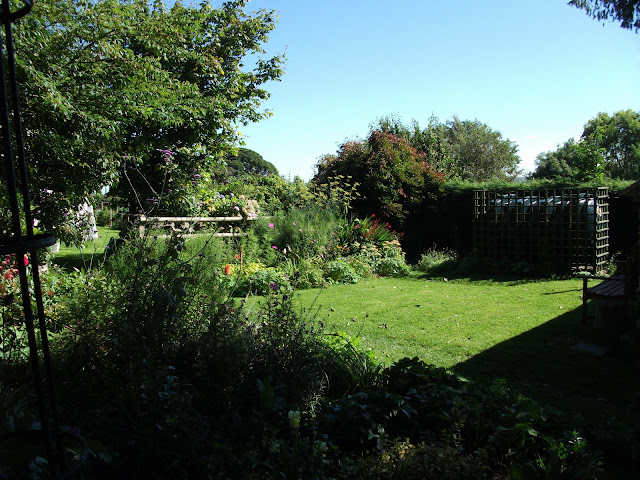 At the beginning of August I was out of love with the garden - gaps, tired foliage, few flowers and those that were flowering ones I had lost interest in.  This always happens.  For some reason August is just not my time.  Taking these pictures as September came in made me realise that I am engaged all over again. This is the side garden.  I know it will look better when the four different types of honeysuckle have grown up over the trellis but I think it doesn't look too bad.  The shapes of the foliage, meaty hellebores, airy verbena, spikes of crocosmia and clouds of fennel and cosmos, all please me.  At the front of the borders the alchemilla and the hardy geraniums which were cut back a few weeks ago have regrown into satifying hummocks. Some of the individual plants are stars too.  I have grown dahlias this year for the first time with some serious attempts to make them settle into my stony soil.  Previously I have chucked the odd one and let it take its chance.  This year
19 comments
Read more
More posts