Showing posts from April, 2021
Show All

- April 18, 2021
Monday 12th April was the day for the opening up of some restrictions in England, not here in Wales where some things (hairdressers!) had already opened and others (outside hospitality) remain closed until the 26th of this month.  So here, in case I forget as I surely will, is a day by day account of this last week. Monday We drove to Manchester for the first time in months to see our older son and his family.  You know that little children grow very fast but even so it was a shock to see how tall the six year old has become and that the two year old has gone from a toddler to a chatty little girl in the months since we had seen them.  The oldest, at fifteen, is very clearly a young man now.  How fast it goes.  We shared lunch and walked and played in the park.  At one point the six year old said with some satisfaction "You really like me don't you Grandma?"  How lovely.  That is one of the great gifts grandparents can give their grandchildren, that sense of other people
10 comments
Read more 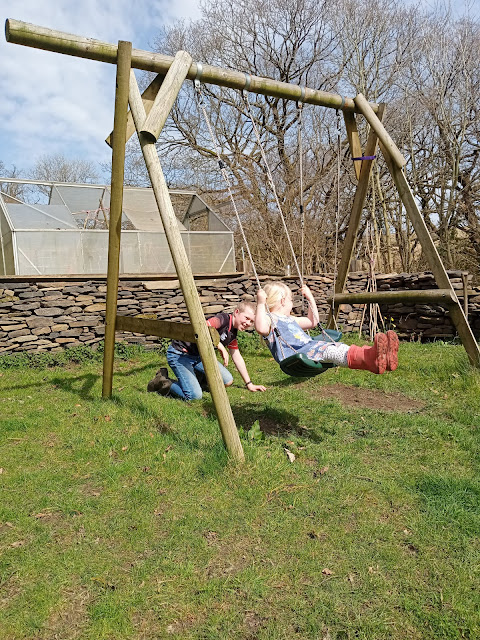 On the 28th March we were at last allowed to stop "staying local" and travel within Wales.  Two of our children and their families live in Wales and two in England.  We had managed to see our North Wales daughter and her family through the lockdown from time to time, for childcare or, as things relaxed a bit further, outside for a walk or a play in the park.  The South Wales family we had not seen for months although we facetime and talk pretty often.  We would have to stay outside if we made the four hour journey down the border.  So Emma and I plotted together.  We could bring the campervan which would be our place to sleep and retire to.  She would buy a firepit so we could spend the evenings together outside on their terrace.  The weather forecast was consulted and two or three days of unseasonal warmth were predicted with winds from the south bringing some sunshine and higher temperatures so that was when we would travel.  Plan made. On Tuesday morning as we drove south
9 comments
Read more
More posts