Showing posts from November, 2009
Show All

- November 28, 2009
On Wednesday my daughter had her first baby, a little boy. He was two weeks early and delivered eventually, after a long labour, by caesarean section. They are both fine and still in hospital, with E longing to go home! It has been quite a journey for her with a pregnancy plagued by sickness. As always she has been her mainly cheerful and stoical self. She has always been like this, not one to fuss, not one to seek sympathy. As a two year old she had whooping cough. Even then, her face flaming and streaked with tears and her little body shaking with the spasms, as soon as the coughing stopped she would shake herself, blow her nose and say firmly "I'm all right Mummy." I have admired her so much as she has gone through this pregnancy, exhausted, sick, trying to hold down a difficult job, but, just as soon as the nausea faded, back to herself, strong and calm and without self pity. She is quite a girl, or a woman now I suppose. And her husband has been fantastic too: shopp
42 comments
Read more

- November 21, 2009
Well here I am with another evening on my own and this time I am up here without a car. The wind has been battering the house all day so inside has been the only place to be and here by the woodburner the wind is blowing in the chimney and making the flames leap higher. All day the wind has shouted and shuddered and thrown great showers of rain at the house. Astonishingly the hens, who have been shut into the run all week while I have been away visiting my daughter, were so desperate to get out that they have spent the day being buffeted about the garden, their feathers blown inside out like a bad hair day, struggling against the wind and rain, hiding in the bottom of hedges but determinedly not going back into the henhouse until nightfall. I, by contrast, have been huddled by the fire, half watching the rugby and half reading the paper. I decided that a good use of a few hours being shut in against the weather would be to make my Christmas cake and Christmas pudding so all day the ra
32 comments
Read more

Are you the leaver or the left?

- November 13, 2009
Ian has been away this week and I have had a bit of time here on my own. Visitors who come from the brightly lit city and look out into the velvet dark up here often ask if I mind being here on my own. The answer is not at all. Our neighbours at the farm are seconds away even though we cannot see them from the house and I don't mind being alone by the fire or snuggled down in bed. For the last twelve years or so I have been the one to go away. It is curious now to find myself the one who stays at home. So what is the difference in how it feels? Well, going away is a strange mixture. If you have children there is always a little bit of guilt (or even a lot!) no matter how well looked after you know they will be when you are gone. My children were in their teens by the time I was spending weeks away with work and didn't seem to mind too much. Perhaps they even liked the fact that I wasn't hanging around checking if they had done their homework and trying to encourage t
34 comments
Read more 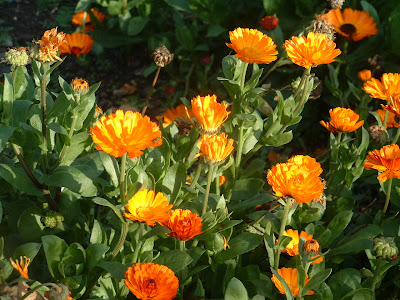 It is time for a blog about day to day things. I am sitting by the woodburner with a new load of logs in the basket and it is raining gently outside. Only a week ago we were hanging on to the last days of a golden autumn which almost converted me from my long held dislike of this time of year. The garden was looking better that it ever has in October, thanks to a combination of the endless flowering of masses of self seeded cosmos and a soft warm light which washed everything the pale straw colour of Fino sherry. I planted out a hundred tiny wild tulips, tulipa sylvestris, which will fling open their star shaped cream and yellow flowers in spring. I sowed Sarah Raven sweet peas and annuals, Orlaya Grandiflora, Ammi Majus, and white foxgloves by the box full. I considered once again cleaning out the aluminium greenhouse and once again found something else to do. That must be one of my least favourite jobs, on a par with cleaning the oven. I spent almost as much time outside as I do
23 comments
Read more

- November 03, 2009
It's November, one of my two least favourite months, the other being February. It is dark by five, and going to be darker. The leaves are whirling and there are all those things queueing up in the garden which I haven't done yet, including planting ludicrous numbers of tulip bulbs. Last month it was warm and inviting outside. Now it is colder and wetter and I am feeling like a very fair weather gardener. Eventually I will be able to persuade myself into looking forward to Christmas, but I need to wind myself up to it so I am not yet ready to go into a wonderwoman, organisational whirl to distract myself from the beginning of winter. So I am going to indulge myself with a list: ten things that make me smile. Michael McIntyre. I don't know quite what it is about him. He makes me smile before he has even opened his mouth, a useful quality in a comedian you'd think. My three year old grandson in the park, "Grandma, lets go in the woods and have an adventure&q
29 comments
Read more
More posts