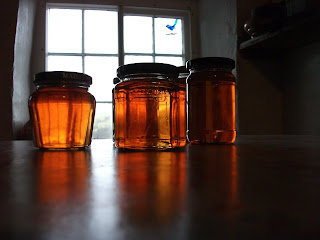 Apple jellies sound complicated but they aren't.  They are a bit time consuming but it is that sort of time where you just have to be around for a bit, not necessarily paying it very much attention.  So if you can just give it a little time, during most of which you don’t need to pay your jelly any attention at all, here is how to make an apple jelly. The only thing you need which you may have to buy is muslin, either in a ready made bag (Lakeland do one) or as a length of material to make your own. You will also need four or five empty jam jars with screw lids.  I use a preserving pan but a large pan of any kind will do fine. 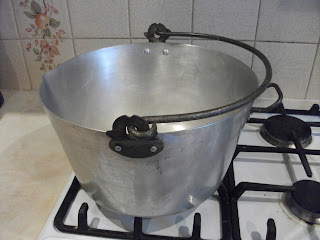 Jellies are easy, no peeling or lengthy preparation, and they produce jewel coloured jars which shine on your shelves and which can be used to accompany meats (apple and mint jelly with lamb, apple and sage with pork), to add depth of flavour to stews (quince jelly in beef casseroles or in gravy) or to have on bread or toast like jam.
Start with a couple of kilos of apples, cooking apples or eaters, it makes no difference. Chop off any bits which are badly bruised. You don’t need to peel or core them. Chop them in half and then in half again and put them in a large pan. Add about a litre and a half of water.


This is the basic recipe for starting off an apple jelly. In the autumn I might make jellies with other herbs but by late January many herbs have disappeared or become so tatty and sad they are best left alone until spring.  Today I decided to use a pot of mint which I had been keeping alive on the kitchen windowsill.

To the apple and water mix add a large handful of mint leaves.  Simmer this until the apples are soft and mushy. Depending on the kind of apples you are using and the state they are in whey they go into the pan, this will take from half an hour to an hour or so. Just stir them from time to time to see if they are collapsing.

When they are soft turn off the heat and put them into a muslin bag suspended over a pan. I have a butcher’s block with a shelf on the bottom which works well for this but traditionally you could upturn a stool.
Transfer the pulp to the muslin bag using a jug or a large ladle. When I do this I hold the jug or ladle over a bowl to stop the apple puree dripping everywhere. Leave the puree to drip over the pan. Giving this process time is all that matters. Don’t squeeze the bag, don’t poke or prod. Just let it drip slowly and gently for at least twelve hours and up to twenty four. If you squeeze the bag at all the resulting jelly will be cloudy and will not give you the jewel bright clarity which will glow in its jar and cheer up the darkest day.

When the muslin bag has stopped dripping it is time to for the next stage. Pour the clear juice into a measuring jug. For every 600ml of juice add 400g of sugar, ordinary granulated is fine.
Bring the mixture slowly to the boil, stirring to dissolve the sugar. Add 100ml of cider vinegar.  When the sugar is dissolved turn up the heat and let the liquid boil hard for ten minutes or so. If any scum comes to the surface take it off with a slotted spoon.

While this is happening put yesterday’s newspaper onto the shelf of an oven at its lowest possible setting. Stand the clean empty jars on the paper and set the oven timer for ten minutes. Put a small plate in the fridge.


Turn off the oven, take the liquid off the heat and test for setting. You do this by dropping a teaspoon of the hot liquid onto the cold plate you have taken from the fridge. Put it back in for a minute and then test for setting by pushing the liquid with the tip of your finger. If it wrinkles when you push it, it is ready. If not, put the liquid back onto the heat and boil again for a few more minutes. Then test again. How long it takes to get to setting point depends on the kind of apples you are using.  Sometimes it will set quite quickly, sometimes it might take as long as an hour's boiling.  It will happen if you boil it hard enough for long enough so don't give up and put it in jars too early!

When your teaspoon of liquid is wrinkling under your finger, pour the jelly into jars and screw on the tops. Sometimes there is a little bit of scum on the surface, and if so you can just skim it off with a spoon either before or after you put it into the jars. I sometimes add fresh herbs at this point, partly because it looks pretty  but I had used all the mint today.  Leave it to set. It will take a couple of hours, until the jars are completely cold. When they are cold label them with the contents and the date. A beautiful handwritten label looks good, or if you are like me and have illegible handwriting, print computer produced ones. Store. Eat with roast lamb or cold meat. Feel like a domestic goddess. 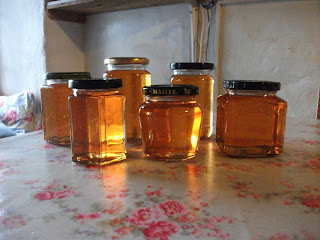