Coming up to Christmas

- December 23, 2016
The run up to Christmas might not seem the ideal time to get the decorators in.  Over the summer we flirted with the idea of moving house.  We found something that we liked which doesn't happen all that often because this place is a place we love.  But it didn't come together and, with something like relief, we have committed ourselves to this house again for another little while.  We won't live here forever.  With a house and a holiday cottage and six outbuildings, two greenhouses and a couple of acres of land, it is not a house in which to grow properly old.  But for now we will happily stay here and as part of falling back in love with the house I wanted to reconnect with it which means giving it some time and attention.

So first of all we had our bedroom and the landing where we keep our books (well some of them) redecorated.  It is quite extraordinary how much stuff we have and how emptying a room makes the whole house overflow with things!  It is as if a flood of stuff has washed through the house leaving piles of flotsam and jetsam on beds and in corners.  How did we ever come to have so much stuff?

And then to put things back in their proper places, attempting a bit of judicious culling, is so satisfying, and emptying and refilling the spaces makes you look at them again.  I don't think of myself as someone who is particularly good at design and visual things.  My mother was very good indeed at making houses comfortable and welcoming so I know what I want my house to feel like but I don't always know how to make that happen.  This house makes it easier because the house itself is so interesting and the old shapes of its construction so beautiful that you don't have to do very much to it other than let it speak for itself. 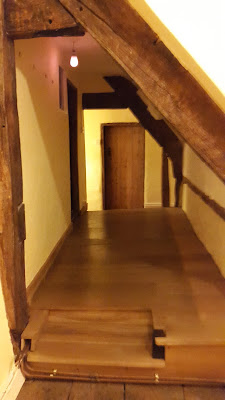 So here is the landing upstairs repainted and waiting for its books to go back. 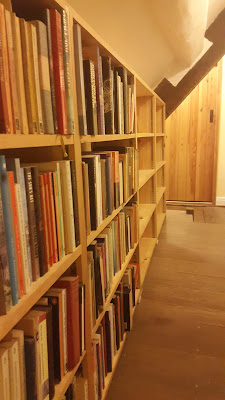 And the books going back on the shelves.  I discovered that this was a job which I had to do in short sessions: do it for a short while and I could take real pleasure in sorting and alphabetising and making sense of things.  Do it for too long and the desire to be finished with it and just bung things on the shelves and run away would get too much for me.

Then our bedroom got the treatment and we did some major moving around of furniture so as to have a bigger bed and to release one of our spare bedrooms to become a sewing room and study.  For a week or so we camped in the guest bedroom and then took back our bedroom. 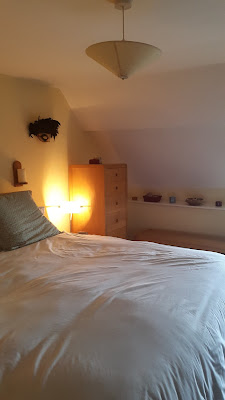 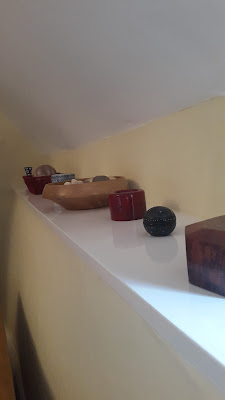 It doesn't look very different to be honest but just different enough to make me see it all over again.

And the sewing room came together with vast sorting of my stash of fabric and yarn and much muttering over the reorganisation of books.  I still have things sitting in cardboard boxes for the charity shop but it is nearly there. 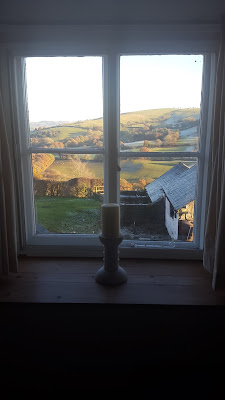 It has one of the best views in the world anyway! 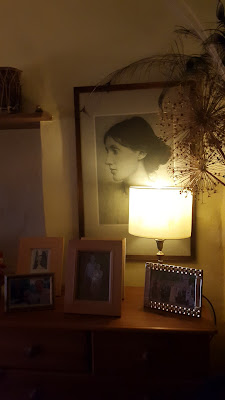 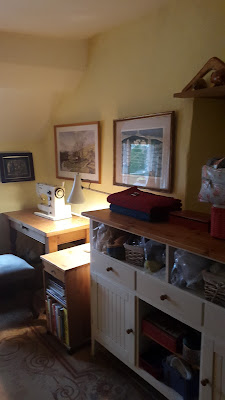 And then came the new woodburning stove in the sitting room.  This was supposed to be a half day job to install.  Wrong!  We sort of knew this would the case.  A four hundred year old house and a straight forward job are words that don't belong in the same sentence.  In the end it involved taking the plaster off the wall behind the stove, replastering, and installing a cowl on the chimney. This meant Ian asking a pre-Christmas favour of our local builder who hired a cherry picker and came and sorted it out for us.  Diolch yn fawr Gareth! 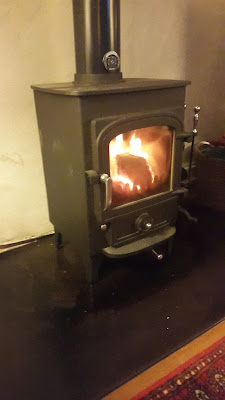 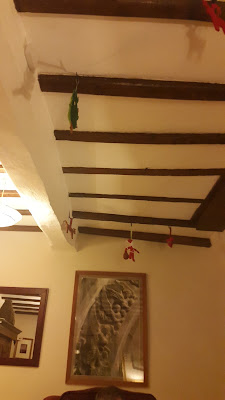 But now the stove is in and is wonderfully warm, easy to light and doesn't eat logs in the way the other one did.  The hand made Christmas decorations created by a daughter in law at a Christmas a few years ago before she had children are hanging from the hooks where sides of bacon used to hang long ago when the room was the farmhouse kitchen.

We are not finished yet.  The sitting room itself needs redecorating as does the kitchen but we are nearly there and now it is time to take a break, to sit by the stove and knit or read.  We have our younger daughter and her family coming for lunch on Christmas Eve and our turkey was delivered by friends this morning.  The rain is throwing itself against the windows and the wind is tearing at the yew trees but inside it is quiet and warm and calm and for the time being everything is in the right place.

Merry Christmas everybody.  I hope yours is happy and full of the people you love.
christmas decorating light peace warmth