- April 13, 2018
Sometimes with the best will in the world there is simply no time to be out in the garden.  Today began with a rush off to Welsh class in a misty, wet morning.  After three and a half hours of doing some stuff in Welsh which I didn't even know I had forgotten, never mind didn't remember, it was straight to meet Ian for a speedy lunch on our way to younger daughter's for an afternoon with her and her children.  By the time we got home all energy was spent and the day was over.

So today's part of the 100 day project is about an achievement which has been a very long time in the making and which is only very tangentially mine.  Some years ago (three?  four? I am not sure) Ian and I were wandering around the garden and arrived in the bottom third of our field/garden.  This area is meant to be enclosed and is the only area in the garden which is not turned to look at our stupendous view.  It is meant to be a place to walk into, a place of greater enclosure and shelter.  We planted a long bed across the bottom of this area with native trees and hellebores and dogwoods.  For a long time it looked like a line of sticks in a field.  Now the trees are grown and the dogwoods are substantial and the primroses and hellebores and hardy geraniums take possession of the space in a satisfying and beautiful, to my eye, fashion.  The remaining sense of enclosure comes from a hefty native hedge, an infant line of beech hedge, some white stemmed birches and some giant grasses, echoing the line of the native hedge and taking the last of the sun in the evening.  I had closed the space off with a bench which looked up towards the grasses and beyond to the orchard.  "You could have some sort of summer house here"  Ian said.  I nearly bit his hand off because I knew that by that he meant he could build one. 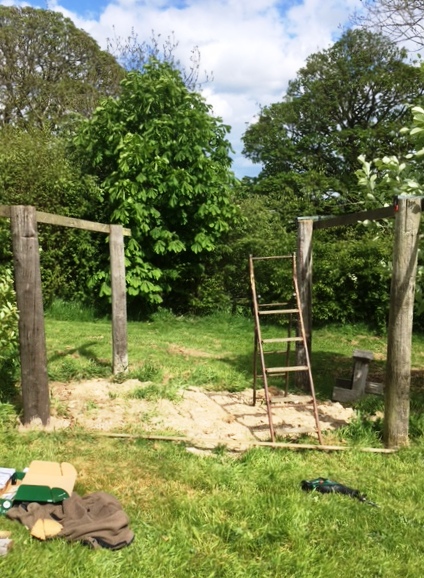 And so it began.  For a year or more the structure was four cut down telegraph poles lurching at crazy angles in the corner, waiting to be fixed in.  Then it spent another year or so with the poles standing tall but with no roof or walls.  Around about a year ago Ian built the framework for the roof and the roof went up. 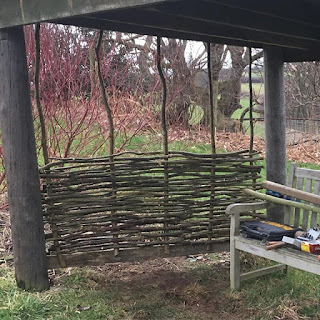 And then six months or so ago he made the wooden framework for the walls for three sides which were going to be made of hazel poles, rather like hazel hurdles and all of a sudden it looked as though it would become a building.  I feel I should leave the detail of the construction to Ian as it is his story to tell.  My job was to turn up and make pleased noises and suggestions about whether there should be open "windows" in the hazel.  Answer, yes so that when you sit in it you can look into the dogwoods and rowan and the whitebeam. 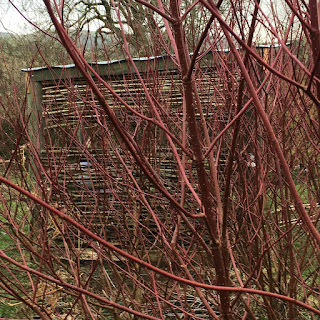 We planted some hazel years ago with the intention of coppicing it but even that was not enough and Ian had to supplement the hazel rods with more from the verges. 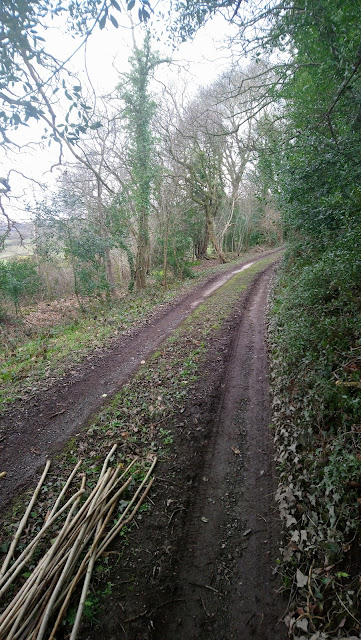 And a couple of weeks ago it was finished.  I am calling it a summer house.  Ian is calling it a field shelter, insisting that it is too rustic to be called a summer house with its overtones of gracious Edwardian living.  I agree about that but my view is that a field shelter is somewhere sheep huddle in when it rains.  Ours is somewhere between the two: open fronted and rustic but beautiful in its simplicity. 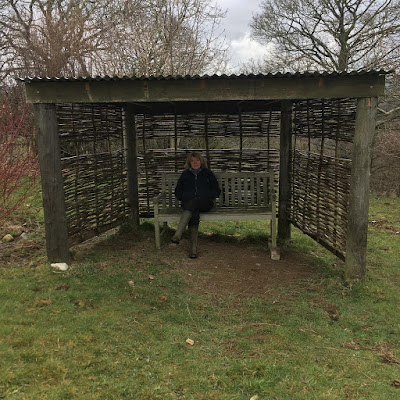 It is just waiting for the ground inside it to be levelled and surfaced somehow (bark chips?  I am not sure).  You will realise immediately that I mean by this that Ian will level the ground and sort out the surface, even though I make it sound like a job for the shelter fairies.   It is frustrating that it was completed just as the weather turned dank and grey and very cold so we have not yet sat in it with a drink in hand watching the last of the sun go down, but we will.

My contribution, other than a small amount of hauling hazel rods,  and today's contribution to the 100 day project has been to buy a honeysuckle and a white clematis montana.  These are both vigorous and rampant plants and in other gardens might be too much when they get growing.  Here everything grows rather smaller and less vigorously than it does where the soil is rich and the site is sheltered so I don't think they will overwhelm the summer shelter, or whatever we will find ourselves calling it.   But honeysuckle does grow well up here and there is a lot in the hedges so it should look at home.   I will plant one on either side towards the front of the structure and I envisage it dripping with honeysuckle so that the scent blows in on you in the evening breeze.  We shall see, and smell.