- June 22, 2020
Is it easing a little now?  Watching the news on television it certainly looks like it.  Living up here under Welsh rules in a rural part of the country it doesn't seem very different.  Hospital admissions are slowly decreasing as is the daily death total.  There is more traffic on the roads.
I have given up watching the daily press conference from Westminster.  This is partly news overload, and partly an irritation with politician speak.  There seems to be a refusal to admit mistakes, and a weird tendency not to make changes in a clear way but to trail changes that will be made as though testing to see if they will be palatable.  I read an article in the Times about the money being spent on polling at present by government and it seemed to fit that sense of a government which is almost too reactive, being led by rather than leading public opinion.  I am not making a party political point here.  I remember having a similar sense when Tony Blair was in power of government by focus group.  And I do appreciate that it is necessary to bring people with you, especially as we begin to move out of lockdown.  Maybe it is just lockdown weariness on my part.  It is clear that the social distancing rules are going to change, with the two metres being reduced, probably to one metre with greater wearing of masks.  That will need to happen if schools are to go back.  But I am really ready for some clarity and some leadership.
Wales has announced that in two weeks time there will be a relaxation of the requirement to stay local.  That will be welcome and might allow us to see at least some of our family.  Two of our children live at a distance which would normally need us to stay overnight for a visit, which at the moment does not look possible, but we are hoping that there might be sufficient relaxation for us to make use of our campervan for an overnight stay.  We shall see.  Something to look forward to anyway!
Here I have seen one of two different people this week!  I took my car into the garage to be serviced.  The head of servicing was carefully taking me through all their safety precautions in relation to Covid 19.  I realised after a minute or two that I wasn't really listening.  I was sitting there thinking how nice it was to talk to a near stranger after so long! Later in the week I dropped into a friend's house with a contribution to a birthday  present for our friend and Pilates teacher and it was lovely to stand in the garden and catch up.  These interactions are ones that I have missed during lockdown.  Family and very close friends have kept in touch via zoom or facetime but there are lots of small connections which don't merit a facetime call but are part of the fabric of life: a cup of coffee after yoga, a chat before Pilates, a catch up over a cup of tea in the break in a choir rehearsal.  Earlier this week I was reading about some research into loneliness in adults which had found that, while close family and friends are important, those who did not have those relationships but reported frequent interactions with others, even if those interactions were as small as a chat in a shop or on a bus, also reported much higher mood and life satisfaction.  How strange that such micro interactions should be so important.  We are social animals. 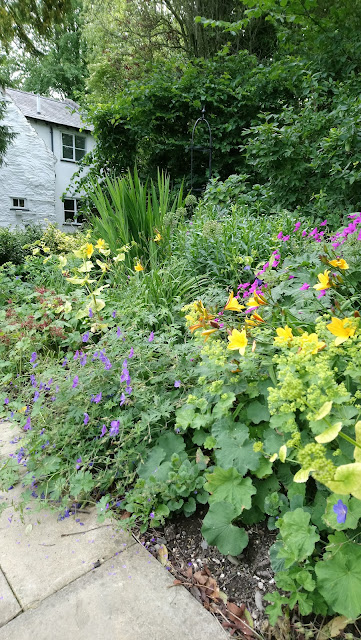 So what else can I offer as reasons to be cheerful this week?
Still here, still (mostly) smiling!  Can I go and see my people now please?
coronavirus diary