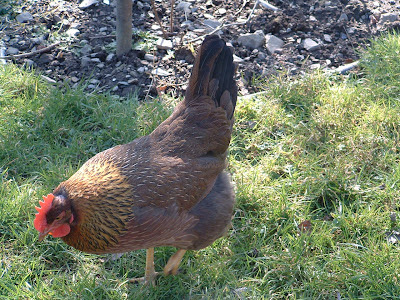 One of the hens has gone broody. About ten days ago I went to let them out and found Edith the Welsummer sitting determinedly in the nesting box. I thought she was laying and left her alone. The next day there she was again and sitting in a curious way, her feathers held out so that she looked like a great feathery flatfish. I rang my friend Penny who hatched the hens for us last year.

"Lift her out and see if she goes back in. If you lift her two or three times today and she always goes back then she probably is broody. If she's not serious about it she will get distracted when you lift her and wander off."

So I lifted her and every time she had a quick drink, a couple of peckfuls of corn and beetled determinedly back into the hen house again and settled down. While she was feeding I checked to find she was sitting on four eggs, one of her own and three bantams.
So out came the books and I was on the phone to Penny again. Apparently she needed a broody coop, a quiet place to sit undisturbed and where she and the chicks when they arrived could be separate from the main run. The coop (which is basically a wooden box with ventilation and a lid) doesn't have a floor but sits on the ground as the damp is good for the eggs. Ian made one, tweaking his back in the process, and on day three we moved her in, adding another nine eggs for her to sit on. I know it sounds a ludicrously large amount but that's what the books say a big hen like a Welsummer can sit on.
Now hens are creatures of habit. For the first couple of days she sat happily enough in her box all day but when she was taken out to eat, drink and defecate she clearly had no sense that her eggs were in the box and clamoured to get back into the run and the nesting box. We don't want her to be off the eggs for too long. I have read that up to half an hour is fine but as the time lengthened and she cloc-cloc-clocked nervously, clearly feeling it was time she was back, we decided to let her go where she wanted to be. Then after a few minutes of settling down we lifted her and carried her back, protesting, to the new box where she settled back again.
Then a breakthrough, on about day three in the broody coop she got it and went back in herself and settled down. If you hatch chicks in an incubator you have to turn them five times a day but if the hen does it herself she carefully moves and rearranges them, making sure that the ones on the edge are moved inside and the ones cosily in the middle of the nest have their turn on the outer ring. She has damaged one egg while doing this but she still has twelve.
I find this utterly fascinating, our first very amateurish attempt at raising stock. It will be about another week to ten days before they hatch. Yesterday I was up at the farm next door where my friend has been hatching chicks in the incubator. There were nine which had emerged that day, tiny buddles of fluff cheeping and falling over themselves. The eggs cheep noisily before the chicks break through. I can hardly wait for the sound from our own eggs. I wonder how many we will get?
The weekend has been full of people: younger son and his fiancee, ready to exchange on their new house so they will have it a couple of weeks before the wedding, and elder son and our two year old grandson for the night on Saturday. Ian has been laying the slate floor in the new greenhouse, despite his bad back.
And yesterday another blogger came visiting, exmoorjane a long way from home. I walked out along the track to meet her. A car turned in but didn't slow. That can't be her, I thought, doesn't look right at all and indeed it was someone going to the farm for an interview as a nanny. And then another car and it must be her. She looks just like I thought she would and she stops and I get in and we drive down to our house.
It is hard to find words to describe this sensation again although I have had it now a few times: you are clearly a stranger, we have never met before, we haven't even talked on the phone, yet I know you, I know what has been happening in your life and you know mine. Words fall out. We don't stop talking for four hours until she drives away.
And again there is that strange overlapping of worlds and connection, things that seem like more than co-incidence. I have been concerned since last week about a friend who may have cancer and who wants to turn away from conventional medicine and treat it with diet alone. She is consulting a nutritionist. Jane may be about to work with the same person. It was the same when I met Mountainear and found that she used to live round the corner from me many miles away from where we both now live. When I walked into her house I saw the great Chinese horse I used to see in the window of her other house years ago. I cannot now remember where the quote comes from but for a long time it sat above Ian's desk:"Deep assignments run through our lives. There are no co-incidences."
And today is a quiet day. The wind has dropped and it is still and soft, not quite rain, the green of the valley muted but still rich. There is bread in the oven. Everywhere is very silent. I water in the greenhouse and muse about co-incidences, or the lack of them.