- April 30, 2010
April has not been the cruellest month this year.  It has been warm and sunny and the garden has exploded into life. 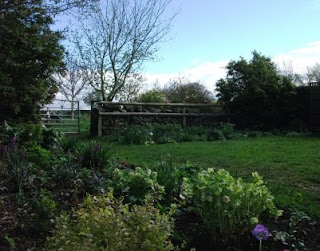 This is the side garden, with the hellebores still flowering away.  Everything else has emerged in fountains of foliage.  The hardy geraniums, of which I have loads, are all in leaf and the day lilies have spurted up.  The paeonies are huge and covered with buds.  Conventional wisdom says that paeonies hate disturbance but these were moved last year as part of the making of the side garden when the building work had finished and even last year they flowered.  There are all sorts of things coming up here: eremurus, lots of aquilegia, the sedums and catmint and, against the stone wall, lots and lots of dusty pink oriental poppies.  It is quite stunning the difference between this end of month view and last month's 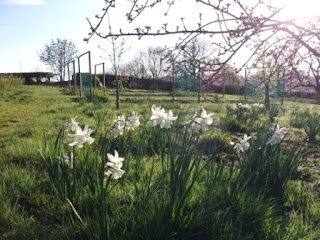 Leaves are appearing on the apple tree.  The Tenby daffodils have finished flowering but the Thalia is still flowering around the fruit trees. 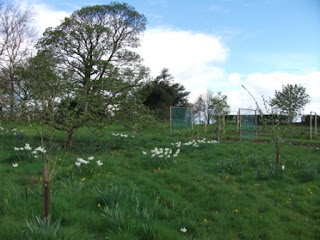 And here is the view up towards the cutting garden.  All of the trees in the little orchard have come into leaf now apart from the mulberries.  I think I shall have to start including a closer picture of the cutting garden.  At the moment it still looks fairly empty, waiting for the cosmos and the zinnias which are still in coldframes to be planted out but there are seventy five sweetpeas planted down at the base of the frames which will eventually produce three walls of flowers. 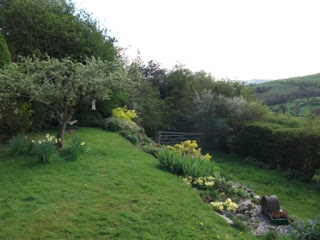 Here is the bank, the quince tree in leaf now and the primroses still flowering.  There are pinks and valerian in here which will start to flower soon and penstemons and sedums for later in the summer. 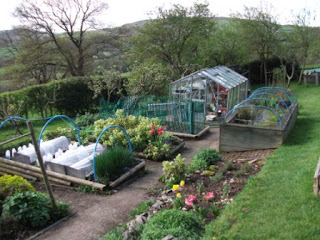 And here is the kitchen garden, with salad stuff under the cloches, garlic by the greenhouse and tulips and hellebores mixed in with the herbs and salads.  And again, just as last time, taking pictures of the garden from a distance makes me long to show you the detail of flowers: tulips and late daffodils still flowering and erythronium Pagoda  for the first time looking  as if it belongs.  In fact I might have to cheat and do another post with the close up stuff, just to show you.
end of month view