- April 03, 2010
Slightly belatedly I thought I would like to join the end of month view started by patientgardener   I love seeing other people's end of month views and my own garden changes so much and I forget so much that I thought it would be a good discipline to make a record.

So here is the side garden.  There was a very narrow strip of flower bed along the wall when we came, about two foot wide, and not much else.  The whole of the side garden became a building site when we had the utility rebuilt at the end of 2008.  There wasn't much choice in doing this as the yew tree at the corner of the building was pushing it over.  So last summer was the first attempt at reinstating a garden.  I dug a huge new bed, widened the other one and reseeded the grass.  The soil here is probably the stoniest in the garden so it has been a project to work out what will grow here which will also look as if it belongs. 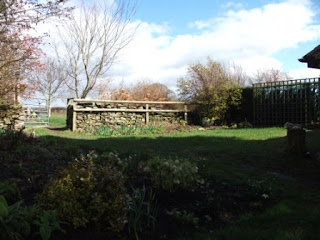 I have tried to start some evergreen framework.  In the front of the picture is an eleagnus which I hope will eventually provide a bit of a windbreak as the wind can whistle through here if we get a strong westerly.  There are also three sarcococca humilis, a hebe and several euphorbias in the side bed.  In the bed against the wall is a pittosporum and a phlomis.  The colour at the moment is coming from hellebore orientalis hybrids, five of them in the foreground here and another three in the other bed.  The pale one here was given to me by Karen from An Artist's Garden.  They are flowering beautifully.  I mulched the hellebores with leaf mould earlier this year and they have really responded.  I am tempted to include some close ups but that is not really the point of this post. 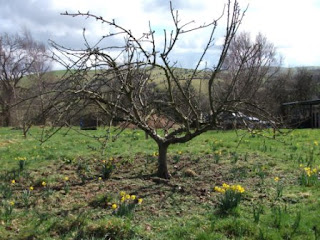 This is what is happening out in what will eventually be a little orchard.  The Tenby daffodils, narcissus obvallaris, are coming out around the fruit trees.  This one is a Howgate Wonder apple which was already here.  There are also a lot of Thalia but they is not yet flowering. 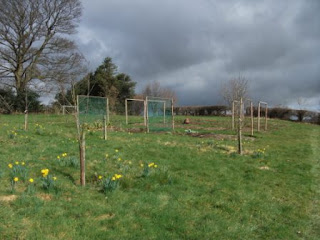 Here is the view up past the new fruit trees towards the cutting garden, empty and sad though it is.  That is probably the place in the garden which changes most dramatically as it fills up with annual flowers. 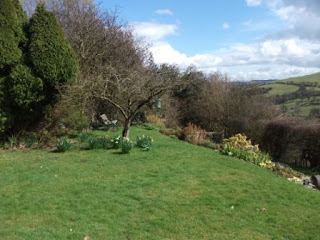 This is the sunny bank in front of the cottage.  The tree is a little quince.  The daffodils here are just beginning to come out.  There are primroses at the end of the bank and another eleagnus.  This is the driest, sunniest part of the garden and the bank has penstemons and sedums in it, not looking like much at all just now.

The kitchen garden is intended to be mainly for herbs and salads, peas and beans, and plants which attract bees and butterflies.  This is the hardworking end of the garden.  The raised beds are netted at the moment because the hens scratch and the onion sets are in. 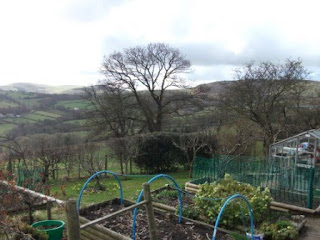 It is funny how bare the garden looks when you take distance photographs, whereas close to there are hellebores and primroses and more and more daffodils.  It is the amount  of bare soil I suppose!
end of month view