- April 08, 2010
We move quite slowly here in terms of what goes on in the garden and then I look back and realise that we have done things and maybe it is beginning to show.   The new native hedges which went in during the autumn of 2008 are looking just a bit more settled this spring as they begin to come into leaf.  There are two lines of mixed edible planting: hawthorn for haws, blackthorn for sloes, dog roses for rose hips and hazel for nuts with one of two cherry plums for good measure.  The dog rose leafs first, its new foliage a bright green spurt against the spiny twigs.

And the new fruit trees are a bit bigger this year too, even if the mulberries are still not yet as as high as my head and won't be for years either by the look of them.  The daffodils round their feet are less spotty than they have been.  They are starting to bulk up and to spread and are just beginning to look like the faintest echo of what is in my head.  It was the daffodils which set me off on this year's project: planting wild flowers around the trees in the orchard.  I love wild flowers and they look very right up here.  I had wondered about making a wild flower meadow in a part of the field but thought that the vivid mixes full of poppies and cornflowers which look so fabulous (there is a wonderful one at the RHS garden at Harlow Carr) would not fit up here.  They are for cornfields.  I needed something gentler, more like the meadows I walked through last year when we walked the Offa's Dyke path but not as full and rich as the meadows of the Wye up here where it is higher and wilder.  Ian suggested wildflowers in the orchard and I spent a bit of time thinking about what I had seen growing wild up here, reading, checking, pottering about on the internet and making lists. I decided to grow the plants in trays and pots so that I could put them in when they are a reasonable size.  I hope this might give them a better chance of competing with the grass than would be the case if I tried to grow everything from seed in situ.

So now I have various things at various stages of growth:

Firstly are oxeye daisies.  I have a dozen of these which I grew from a tiny handful of seed I gathered in the autumn.  I wish I had taken more and taken it more seriously as these are now sturdy plants which have been the first to go out today by the new quince tree.  I have ordered another fifty as plug plants from Wildflowers UK in the hopes of having something really happening this year.  I know they grow on motorway verges and you might think I am quite mad to buy them as plants but I love their simple purity and these are my only indulgence.  Will they take over?  They might but I might not care. 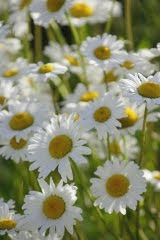 All the images here are  from Emorsgate Seeds who do lots of different wildflowers and have a very helpful website.

Everthing else is being grown from seed.
I have lots of Anthriscus Sylvestris Ravenswing, a beautiful purple form of cow parsley, a gift from Karen at An Artist's Garden. 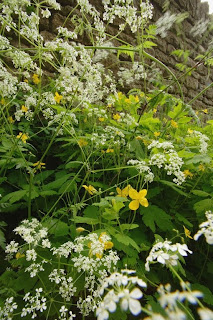 This is the common white variety also known as Queen Anne's Lace.  Ravenswing is a purple form, less dominant as a plant I think, with beautiful, dark, finely cut foliage which should stand high above the grass and a flower with a faintly purple haze to it.

I have also sown some honesty, as much for its beautiful seedheads as for the flowers which are pleasant enough but a bit blowsy.  I think a scattering by the plum and the damson trees will be enough.

I am growing field scabious too which grows wild near here in the lane verges.  The seedlings are still tiny.  I can't imagine that they won't be muscled out by grass and oxeye daisies and cow parsley, but I shall let them get as big as they can before they go out and lift some turf around them to give them a chance.  I love the delicate pincushion flowers. 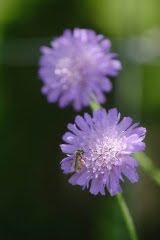 And lastly, although eventually first to flower, are cowslips.  These grow wild up here too, in fact there is a little colony on the edge of our drive.  I want these growing in the open between the mulberry trees, taking over as the daffodils fade.  The seeds need a period of chilling which they have surely had this winter.  I keep inspecting the pots in the coldframe hopefully but no sign yet. 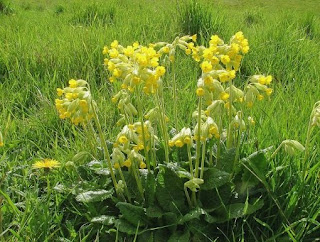 So that is it.  Will it work?  Oh I do hope so.  I can see the mown path between the apple trees in my mind's eye as I go to sleep and hear the insects buzzing in the summer sun.  Mind you, like most things here, it might take a while.
bees cowslips orchard wildflower meadow