- August 19, 2010
I just love where I live.  I love the fact that we can get in the car and drive through green countryside and stone villages to places like Llangernyw (pronounced something like Llan with the Welsh double L - ger with a hard g - nih - ooh.  With apologies to any Welsh speakers if I have this wrong.  Please tell me if so!)

Llangernyw sits in the middle of miles of green fields and rising hills just over the county border from Denbighshire into Conwy.  It is famous for the yew tree that sits beside the church of St Digains. 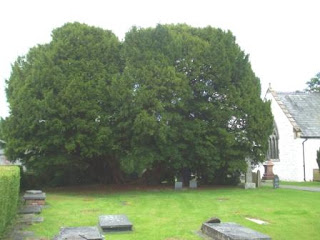 This tree is the oldest in Wales and one of the oldest in the country.  It is around 4000 years old, 2000 years before Christ.  This takes it back into prehistory, back into the bronze age, back to the times when the copper mines at Llandudno, thirteen miles away, were the centre of a European trade in copper.  This tree was here before the iron age hillforts that fill our view on Penycloddiau and Moel Arthur were occupied.  Stonehenge would have been standing on Salisbury plain and might have been standing for 1000 years but this was 2000 years before the Romans came to Britain.  It is too long.  The mind skitters away from time on this scale.  While Tudor England five hundred years ago seems, perhaps misleadingly, just within the stretch of imagination, helped by books and films and television series, 4000 years ago is a mist, a green and grey blur of incomprehension. 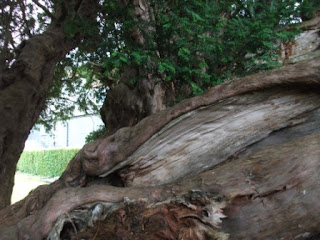 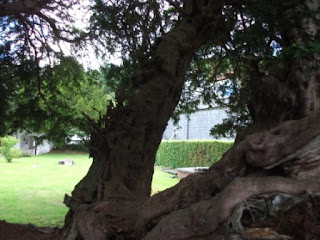 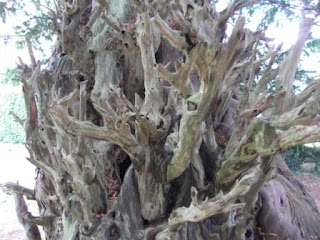 Then we walked a few hundred yards up the road to a tiny museum to commemorate the life and achievements of Henry Jones.  I had never heard of this man before yet he rose in the mid nineteenth century from poverty as a shoemaker's son to hold the Professorship of Moral Philosophy at Glasgow University.  He lived with his parents and six siblings in a tiny house.  There was a room ten foot square which served as kitchen, dining room and sitting room for them all, so small that they couldn't all sit down to eat but had their meals in relays:  the two oldest brothers who were gardeners and thus needed their food first, then the father and his assistant, then the younger children, some of them sitting on the stairs or on the outside step and lastly, by herself,  "my mother ate her meal in peace".  He educated himself, with the encouragement of a local lady and some support from his chapel and local schoolmasters.  While trying to learn enough to be accepted to train as a teacher in Bangor University, he went to bed at 8pm and had the local policeman, as he went on his rounds, knock him awake at one in the morning.  He studied from then until 6am when his father rose and then joined him at his workbench and worked through the day until the light went.  Extraordinary.

We had our lunch in a seventeenth century pub,  The Old Stag. 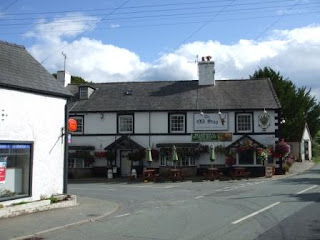 We had a short walk up through the village and by the river and came home.

It was an odd and beautiful day, in and out of time. Four thousand years ago the tree was young.   One hundred and fifty years ago the boy worked by candlelight with his feet in a bucket of shoemaker's leather to keep warm.  Four hundred years ago the inn was bright and busy, full of travellers eating and drinking before they went on their way.