- August 08, 2010
Yesterday I had one of those days when I suddenly felt overwhelmed.  Inside and out, there was so much to do that it seemed it could never be accomplished and we would always live in dust weeds and chaos.  I went looking for Ian to have a consoling hug and was surprised to find myself teary.  I am so not a teary person.  I am a cheerful, easy going, competent person with a tendency to look on the bright side in a possibly irritating, Polyannaish manner.  But not yesterday.  I fought back with a chicken tagine, some homegrown raspberries and cream and half a bottle of a good red wine, eaten properly at the specially cleared table instead of on trays on our knees.

And this morning everything seemed manageable again.  I decided to have a day in the garden and started by taking my camera out to record the largest sunflower we have ever grown. 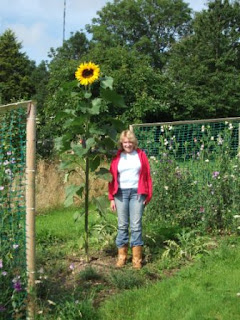 I am five foot four, so the sunflower is probably about eight foot high and such a perfect flower, a flower to make you smile.

Today we also let the chicks out for the first time. After weeks in the run the soil was bare, all grass long gone, and at the sight of the open door they inched out, aiming tentatively for the long grass growing only inches away from the run.  Soon all five of them were out, pecking at the grass and then slowly exploring further and further away from home.  All day they stuck to the corner of the kitchen garden where the hen runs are, hiding in the bottom of the yew hedge for a while. 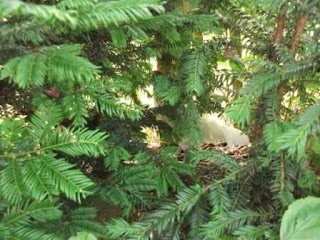 That, I promise, is the tail end of a young cockerel scratching away busily under the hedge.  I don't anthromorphise (much) with any animals but I thought as I often do that hens are clearly capable of contentment, and so presumably of the reverse.  They clearly liked being out, having more room, scratching and nibbling, trying the taste of everything from the familiar grass to elder leaves and dandelions.

I cleared out some of the pots where the nicotiana was looking thin and sad and planted them up with some very cheap but very beautiful deep red pelargoniums that were half price at the garden centre.  With luck they should flower until the first frosts.

Ian dug out barrowloads of compost for the empty raised beds and I sowed some more spinach and kale and a couple of rows of French beans in the bed vacated by onions.  I weeded the peas and beans bed.  I watched swallows swirling and chattering and swooping over the garden and in and out of the stone pigsty where they nest.  They will be gone soon.  When we went out to the garden centre there were lines of them on the wires by our neighbour's gate which is a sure sign that they are preparing to fly.  When we first came here I was surprised at how early in the year the swallows depart.  I had thought it would be September before they went, with the first hint of autumn in the air, but here it is always August, while I am still clinging on to summer.  It will only be a matter of a couple of days before they go now and the garden will feel empty and quiet for a while without them.

It was a good day.  Some parts of the garden emerged from some of the chaos of being left for so long for family and walking holidays.  The chicks went back to their house by themselves, just as the adult hens do, and were all lined up on the perch when we went to shut them in.  We shared the making of a courgette quiche and confirmed the dates of a visit to our lovely friends in Provence.

Back on a even keel again.
garden hens swallows