- February 12, 2011
Yesterday I woke and was instantly awake.  Most mornings I drift in and out, slowly shaking off the fuddle of sleep but yesterday I was right there with my eyes wide open and the clock saying eight.  I realised it was because I was going somewhere: a visit to Karen at Artist's Garden over on the west coast of Wales, a visit that has been postponed and postponed as things fell about our ears.  I felt slightly guilty, leaving Ian with FIL for the day and lots of jobs to do and for no other reason than that I wanted to see her.   I'm not a great one for feeling guilty so it slightly surprised me.  When I took it out and looked at it I found that it was weeks and weeks since I had done anything which wasn't focussed on someone else: looking after my FIL, visiting my brother, worrying about how my mother is coping, wondering about whether Ian is doing too much.  And yesterday I was saying that despite all those concerns, I was just going to get into the car and drive away.  No wonder I felt guilty.

The drive from our corner of North East Wales to the coast near Harlech is one of the best drives in the world.  The road lifts out of Denbigh up over the Denbigh moors, bleakly beautiful, and then takes you even higher into Snowdonia.  The narrow road curves through a high and empty bleached winter landscape and the mountains pile up on either side.  Nobody was going anywhere on a Friday morning in February.  Sheep munched stolidly on the yellowed winter grass.  A black crow flapped slowly up from a rabbit carcass on the road as I approached.  Eventually the sea gleamed silver grey on the horizon and down and down I drove through stone villages, under the trees, down towards the sea with the sand and grass running out to the shore.

I don't think I was very good company but Karen was.  She made me laugh.  She reminded me that spring will come.  I have been tentatively trying to reconnect to my garden.  The garden has always made me feel better.  I have cut back the hellebore leaves and done some mulching, scrabbling for satisfaction and  feeling frustrated that the greyness didn't lift.   But Karen reminded me that January and February are not the time to look for light and colour in the garden.  She has seeds already sprouting inside and seed packets bright with orange and russets, glowing on the table. It's all there, just waiting.

We talked.  I found myself surprised by sudden tears.  I left, leaving marmalade and some of my favourite gardening books behind me and taking away sweet rocket and seeds for a blue Salvia and a sense of having been reminded of myself.

And today the sun shone and I cut back the autumn fruiting raspberries and tidied the greenhouse and undertook the annual, anal, snowdrop count.  We put in about 500 snowdrops in 2006 and 2007.  In 2009 I thought I would count the flowers in the hope of finding that they were spreading even though they looked very little different to my eye.  In 2009 there were 725.  Last year there were 1094.  And this year there are 1480.  I can't tell you how much this pleases me.  Karen tried to tell me that snowdrops increase and yesterday I responded with a snort about their slowness.  But they do and they are.  The crocuses are coming out too by the gate and in the wooden greenhouse the dark purple spears of iris reticulata are unfolding. 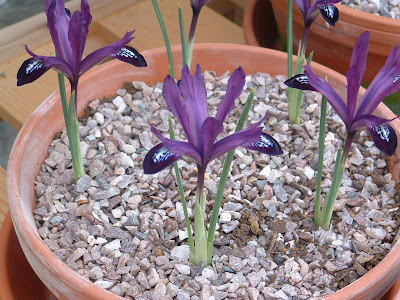 Spring is out there, stirring.
crocuses Denbigh Harlech snowdrops