What is the opposite of a show garden?

- February 24, 2012
Today the sun shone and for the first time this year I worked in the garden.  I was moving snowdrops, splitting some of the larger clumps into bunches of seven or eight bulbs.  This year I have tried moving them "in the white", that is while still in flower.  I have split them very successfully and moved them in the green before but the beauty of moving them while still in flower is that I can see the effect that I have in my head beginning to appear on the ground.  They do indeed look good against the red stems of the dogwoods.  The bed which I grandly call the native tree walk is coming along slowly.  I wandered up and down, establishing that, yes, the winter aconites which I put in last year are coming up, and that of course there is scope to put in many more spring bulbs, more snowdrops, more irises and perhaps more daffodils.  I haven't decided yet about the daffodils.  If I do add some they will be tiny daffodils, either Hawera or the native daffodil, narcissus pseudonarcissus.  But I have so many daffodils elsewhere in the field that I might keep this border to snowdrops and irises.

It is good to look back at photos of the garden a few years ago, especially when you are feeling that you have made no difference!  I found this one from early spring 2009. 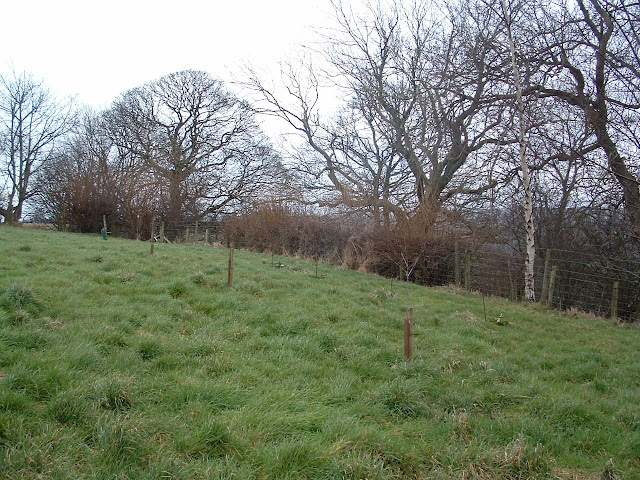 We had just planted four young trees as bare root whips in the previous autumn: a native cherry, prunus avium; a silver birch, the second stick you can see here quivering against its support, in front of the silver birch in the boundary; a rowan and at the end, with the green tree guard, a whitebeam.

These trees just sat there in a sticky kind of way for a year or so.  Late that year I had an inspirational conversation with Zoe which helped me to clarify what I wanted to do and to think about what to plant that would not look out of place.

In late 2010 we took the turf off the length of the bed in a long narrow strip and I planted two hollies and some dogwoods between the trees.  I had an idea in my head of creating something that pulled you down the field to walk between the hedge and the new trees, that gave some point to wandering about on a fine day in late winter or early spring.  I put some snowdrops in too. 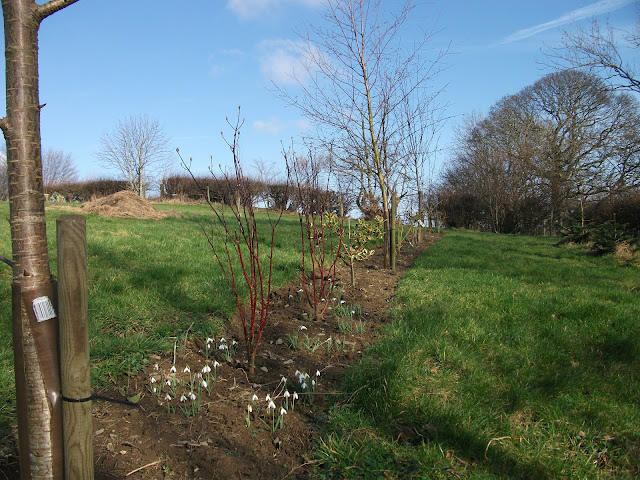 In February 2011 it looked like this.  The trees had grown with surprising speed but it was all very scanty and skimpy and bare.

I decided that the whole bed was just too thin and so we doubled the width of the bed and I spent hours thinking about more shrubs which would play to the idea of late winter/spring.   I wanted to include evergreens and spring flowering deciduous shrubs and not worry too much about autumn.  I put in a Viburnum Farreri, Daphne Bholua Jacqueline Postill, Hamamelis mollis Pallida, an evergreen Viburnum whose name I forget and, a total wild card and maybe total mistake, a Magnolia Elizabeth.  It was the Elizabeth that got me.  I think it is probably in the wrong place.

I still struggle to think on this scale.  How can it be that fifty or a hundred snowdrops bulbs just disappear into nothingness.  There are a hundred single snowdrops in here, just the common nirvalis, and fifty doubles.  The doubles are truly lovely.  Why didn't I buy five hundred or even a thousand and get it right first time?

In early summer Karen came and I took her down to show her.  The whole thing was really bugging me.  All that effort to make the bed wider, all that thought in placing the trees so that they would tie in with the land beyond the garden and in choosing shrubs that would bridge the gap between the natural landscape beyond the hedge and still not look out of place in what remains basically a field, and yet the whole thing looked wrong somehow.  It was anchored so strongly to the field boundary by the echoing of the tree planting that it didn't belong to the rest of the field at all.  It was lost, neither natural planting nor intensely gardened like the cutting garden on the higher side of the hedge.

Talking to someone who understands what you are getting at it a wonderful thing.  My naturalistic, intensely rural, spring focussed and romantic style of planting is not Karen's style at all.  Hers is a painterly eye, using plants to play with colour and texture and shape and to make light dance.  I care about all those things too, although  my effects are much less accomplished, but I care most about how my garden fits into the landscape.  You can't garden here without an eye all the time to the hills and the view across the valley.  I care about how the garden takes its place in all that and about how it makes you feel.  She gets all that and, with her artist's eye, saw what I need to do to connect this space with the other spaces and with her gardener's eye saw how I could take the whole area on into the summer with hardy geraniums. 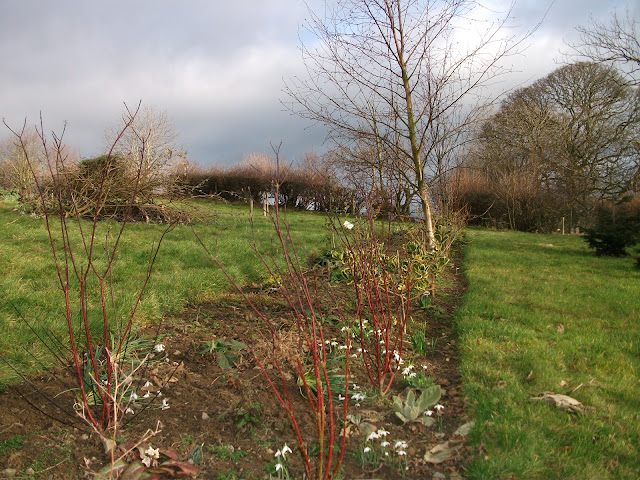 This is what it looks like now, not as different as I had hoped considering the amount of work which has gone into doubling it in size!  Plants take a while to settle down here and get their roots down into the stony soil so the new shrubs are barely visible in this photograph.  It is still a work in progress, still far too much bare soil but so much scope now for washing the ground with colour. 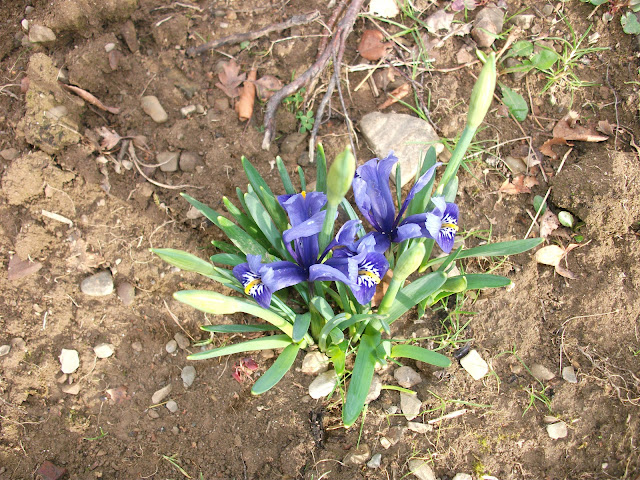 There are nowhere near enough tiny irises, not enough snowdrops and I think I might have to bite the very expensive bullet of buying some cyclamen.  I love them but they are not cheap and I need loads.  In here as well I have a lot of hellebores, courtesy of Jane (thank you Jane!), but they are tiny seedlings too and will need much time before they spread and cover the ground.  I have hardy geraniums, but not enough, and euphorbias, but not enough, not enough of anything except dandelion seedlings.  I do however have quite a lot of white foxgloves in the cold frame which I will put out soon.  This picture lets you see the stony, thin soil.  I am determined that what I plant down here will look after itself and will not need constant mulching and feeding.  There is quite enough mulching to do with the cutting garden and the vegetable garden so I want this part of the garden to be filled with plants that thrive without cossetting.  You can see by how much growth the trees have put on that the soil is fine when plants have got their roots down, assuming you have the right plants!

So there you are.  Do you remember Ground Force on the TV a few years ago with its weekend makeover programmes when a team swept in and revamped a garden, covering it with decking and water features?  This is not Ground Force gardening.   This is slow gardening.  I was in Tatton Park this week and found that they have eighty volunteers who work in the garden at various times.  It is not Tatton Park gardening either.  Our garden couldn't be done without the help of David one day a week who cuts grass, trims hedges and prunes fruit trees with great skill but it isn't gardening with a team of helpers either.   Sometimes I think I would love to buy in plants in huge numbers and transform a space like a show garden at Chelsea but although I spend a lot of money on plants you would hardly know it from looking at the place.  This is propagate it yourself or you would be bankrupt gardening.