What is your ideal place to live?

- November 02, 2013
When I was eighteen I was desperate to leave home and to live in London.  A city, a great big city, buzzing and alight all night long, was clearly the only place to be.  Now I live in the country and in between times I have had all sorts of houses but until now they all shared one thing:  whether close to the centre or farther out into suburbia, they were somehow or other in cities.  I didn't really mean to live in cities after that first determined flight from the nest, it just happened.  Cities were where the work was so London, Birmingham and Manchester all became, at various times, home.

Eight years ago we moved here.  That was a very determined move too, a deliberate choice to live in the country and to undertake a big move while we still had the energy both to make it happen and to live it when it had happened.  Is this my ideal house?  Well in some ways it is and in some ways it isn't but it is a very good house and I love lots of things about it so I thought I would count the ways and ask you about your house.  What do you love?  Is there anything you would change?  What makes an ideal place to live for you?

The first thing I love about our house is where it is.  We wanted a house in the country, rural but not so isolated that you have to drive for miles for a pint of milk.  Our house is couple of minutes away from the nearest village by car or fifteen minutes from our local market town.  You need to be more organised to live here than I used to be when I lived round the corner from a local deli but you can pop into Caerwys for a paper and be back in ten minutes.  And despite the fact that when you are here it feels utterly peaceful and hidden away there are train services to Manchester and Chester and Crewe and London from half an hour away and a motorway network which lets you connect to the rest of the world when or if you want to.  I like that.  I like the balance between how rural and isolated it feels tucked into the side of our valley and how accessible we can be if we want to be.  I have friends who live on the coast in west Wales and although I love it, love the beaches and the mountains and the far awayness of it all, I like living here, where I can slip back into the world if I want to or stay in my hidden hillside, as I mostly do. 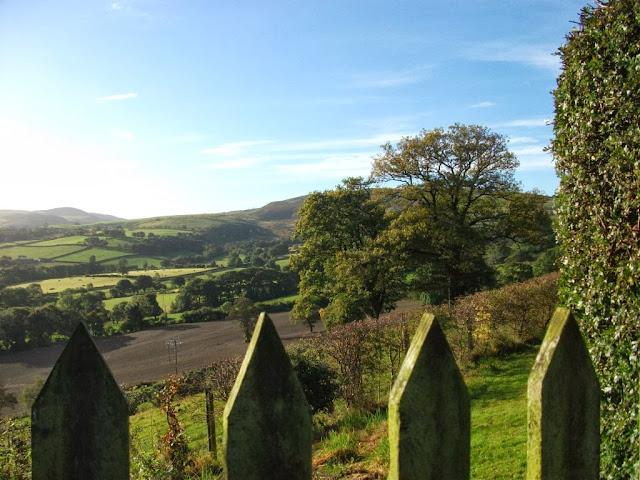 And the other thing I like about where we are is the view.  I have never lived in a house with a view before. In cities and in suburbs the view is invariably of your neighbours' houses and gardens.  That isn't necessarily a bad thing.  I like the roofscapes of cities and I like the patchwork of gardens and streets of suburbia.  But our view is a wonderful thing.  It changes all the time.  The seasons change the colour of the fields, the trees, the hedges.  Morning is full of the sun, rising over the eastern end of the far side of the valley.  The shadows move and change as the sun moves westward.  I love it.  I may never have such a view again but having had it I don't think I could live without some similar sense of space around me now.

So that is the place.  But what about the house? 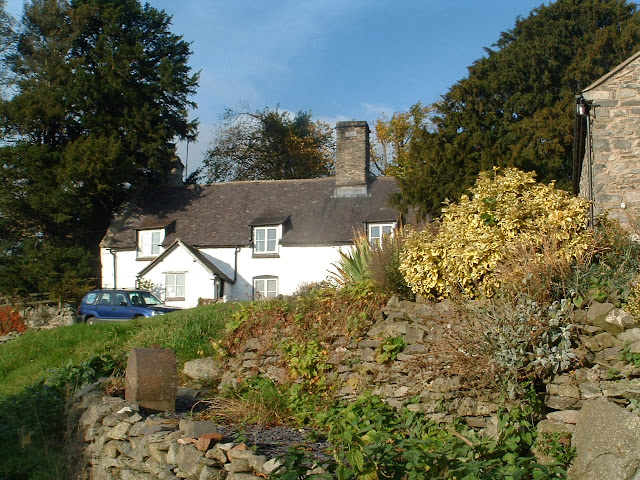 It is a modest house.  I like that about it.  Three rooms and a kitchen downstairs, three bedrooms and a bathroom upstairs, laid out side by side in the traditional longhouse pattern.  I have never lived in a house as old as this before.  We have always liked older houses but they have in the past been Edwardian or Victorian houses.  This house has been here since about 1600, although the original structure would not have looked like this.  It would have been single storey.  The upper storey and the porch are most likely to have been added in the  18th and 19th century as the farm prospered.

Inside the house is simple too. 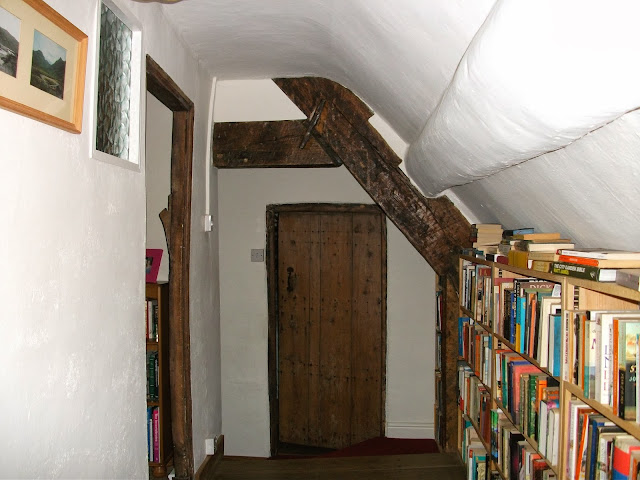 I love the doors with their hinges and handles and locks. 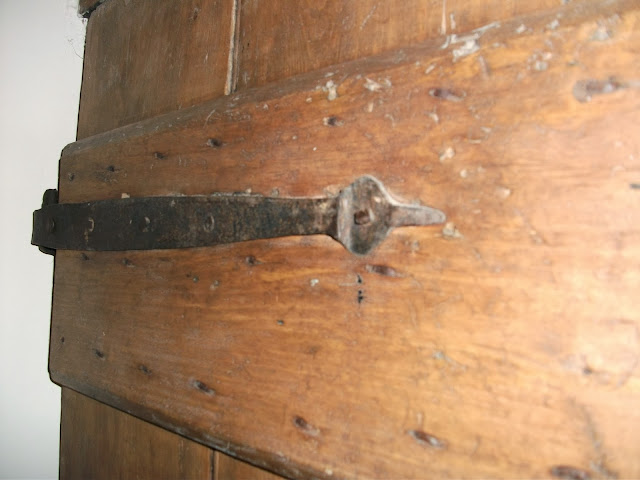 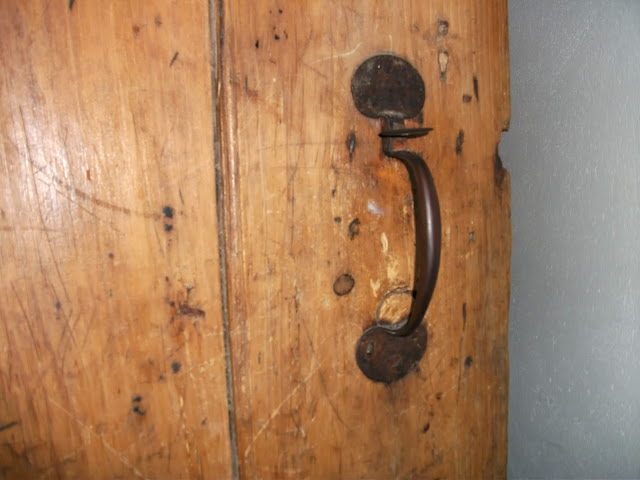 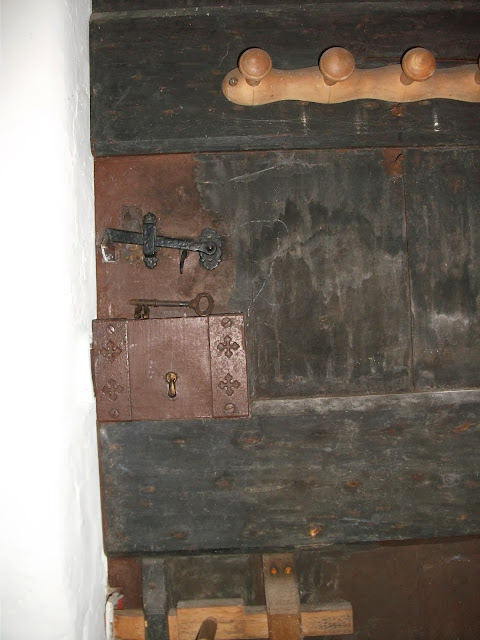 I love the beams and the woodburning stove in the sitting room. 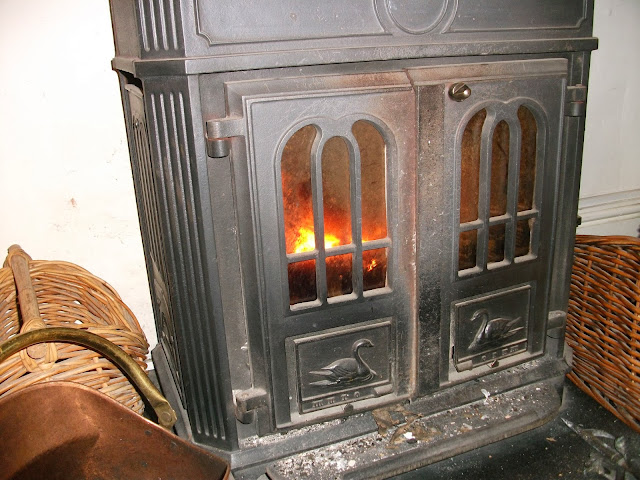 It is a house for shelter and warmth, a house which encloses you in the winter and keeps you snug against the weather.  The walls are thick, the windowsills are deep.

My favourite room is probably the kitchen although I also love the sitting room.  I love the big kitchen table and the range cooker.  When the bread is cooking and the cat is snoozing on the windowseat it feels like a kitchen from the books of my childhood. 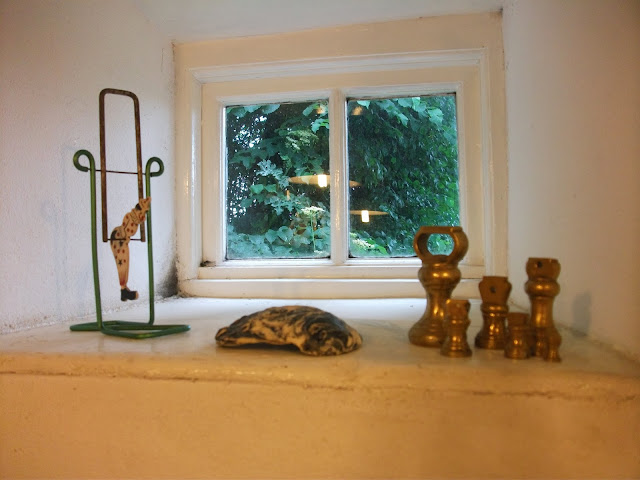 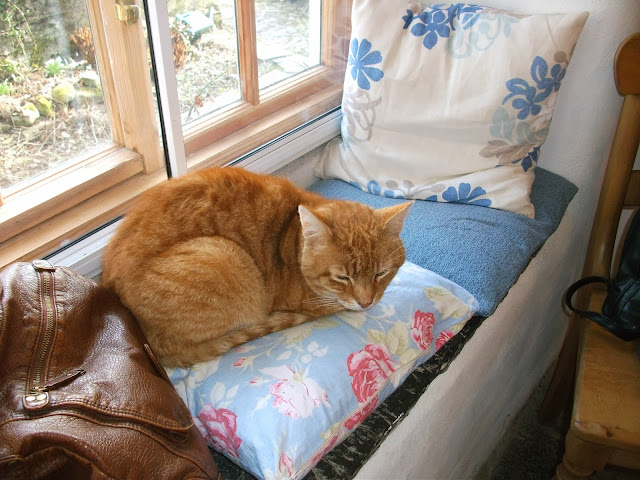 Are there things I would change?  I don't think so.  In a newer house I would like large windows which opened the house up to the view but you couldn't make that sort of change to a house like this without losing its soul.  I would quite like to have a study and a sewing room (and the moon on a stick please) but I do have the shepherd's hut for writing in and a corner of a spare bedroom for sewing in so I know I am a lucky woman.
What about your house?  What do you love?  What would you like to have that you don't, or are you content?
houses