- March 10, 2014
Encouraged by Lucy from Loose and Leafy I am joining in with a group of people following a tree for a year. Now I have to be honest and admit that I started this last year but somehow lost interest quite quickly. Shameful I know.  Last year's tree was a horse chestnut and while it excited me mightily in spring, it then spent a lot of time in the summer looking pretty much the same.  I suspect this assessment is more to do with my failing to look closely enough at what was going on than with any lack on the part of the tree.

This year I wandered about looking at trees and waiting for one to choose me.  I love the really big trees by the house. 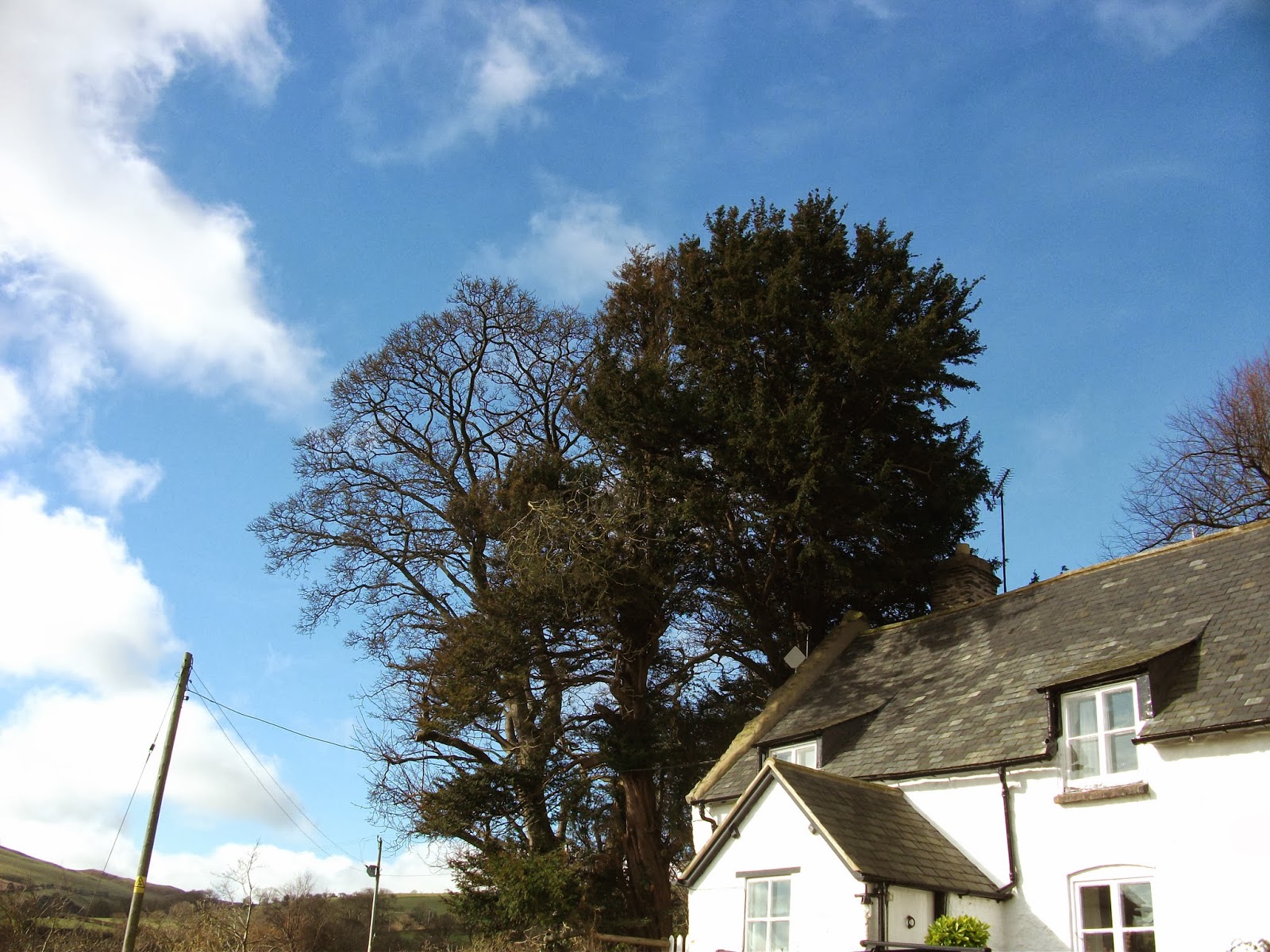 I considered both of these, the sycamore by the drive and the yew by the house.  Somehow they were just too big.  I felt I was not up to the challenge of doing them justice and also they are so damn high.  There would be worlds of life up there that I wouldn't know anything about, however carefully I photographed them every month from the ground.

I wondered about the Howgate Wonder apple tree in the field which has a lovely spreading shape and an astonishing yearly crop of huge round apples.  I contemplated a walnut (too late coming into leaf if I wanted my readers to keep awake), a crab apple (new and beautiful but very small) and a blackthorn (might get cut to shreds by the thorns if I got too close).

Walking around the field it struck me that the rowan in the boundary hedge next to the shepherd's hut would be perfect.  Not too big, right outside the window when I am working in there so not easy to forget or ignore and I knew the tree was full of bird life because I watch chaffinches and sparrows and a little wren come and go when I am at my desk. 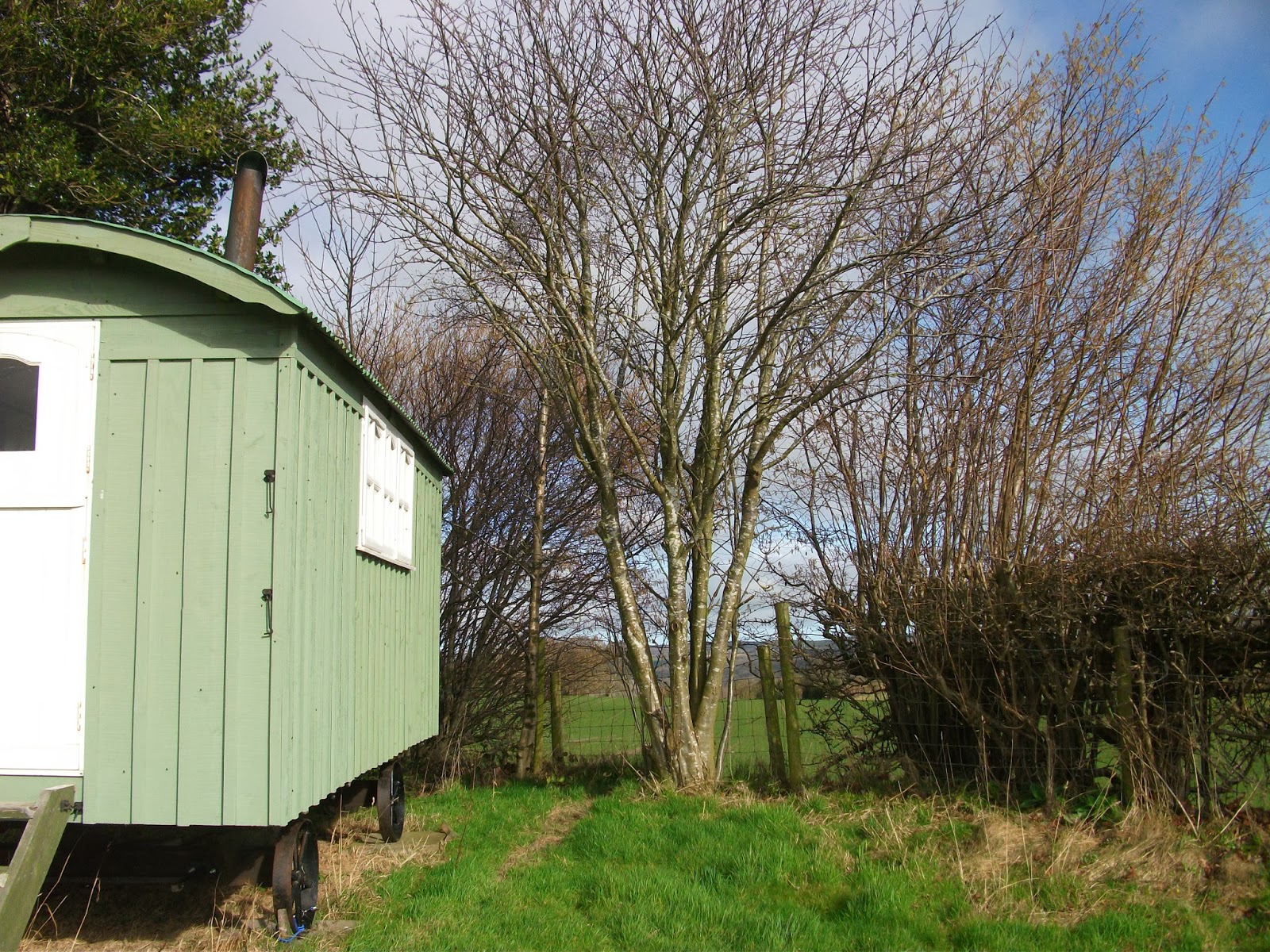 So here is my tree.  She is multistemmed and graceful.  The little path you see to her left, disappearing towards the fence, is the badger track where they come in at night from the neighbouring field. 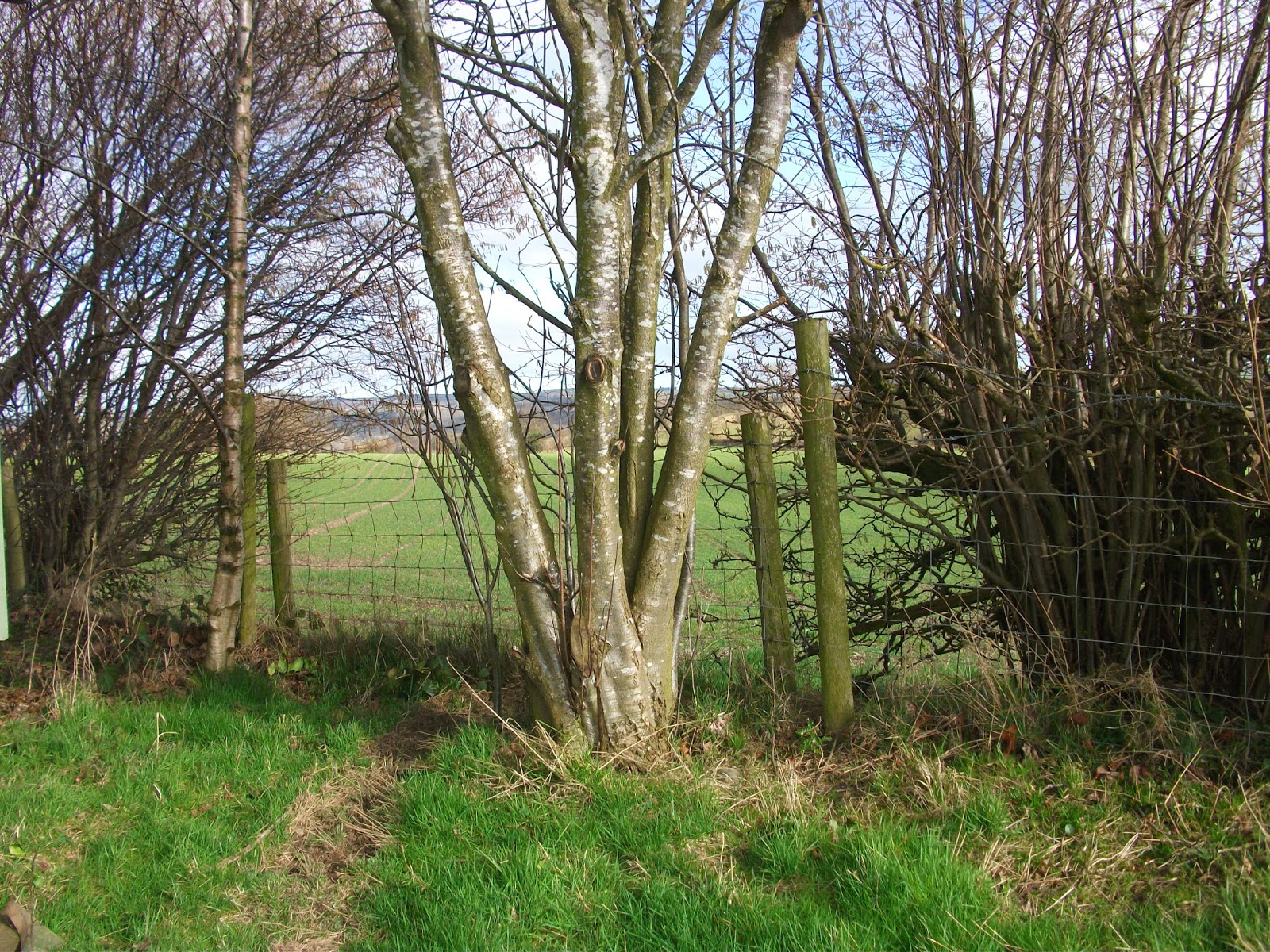 Right behind the tree the animal track dips beneath the fence, just large enough for a small dog or a badger to get through. 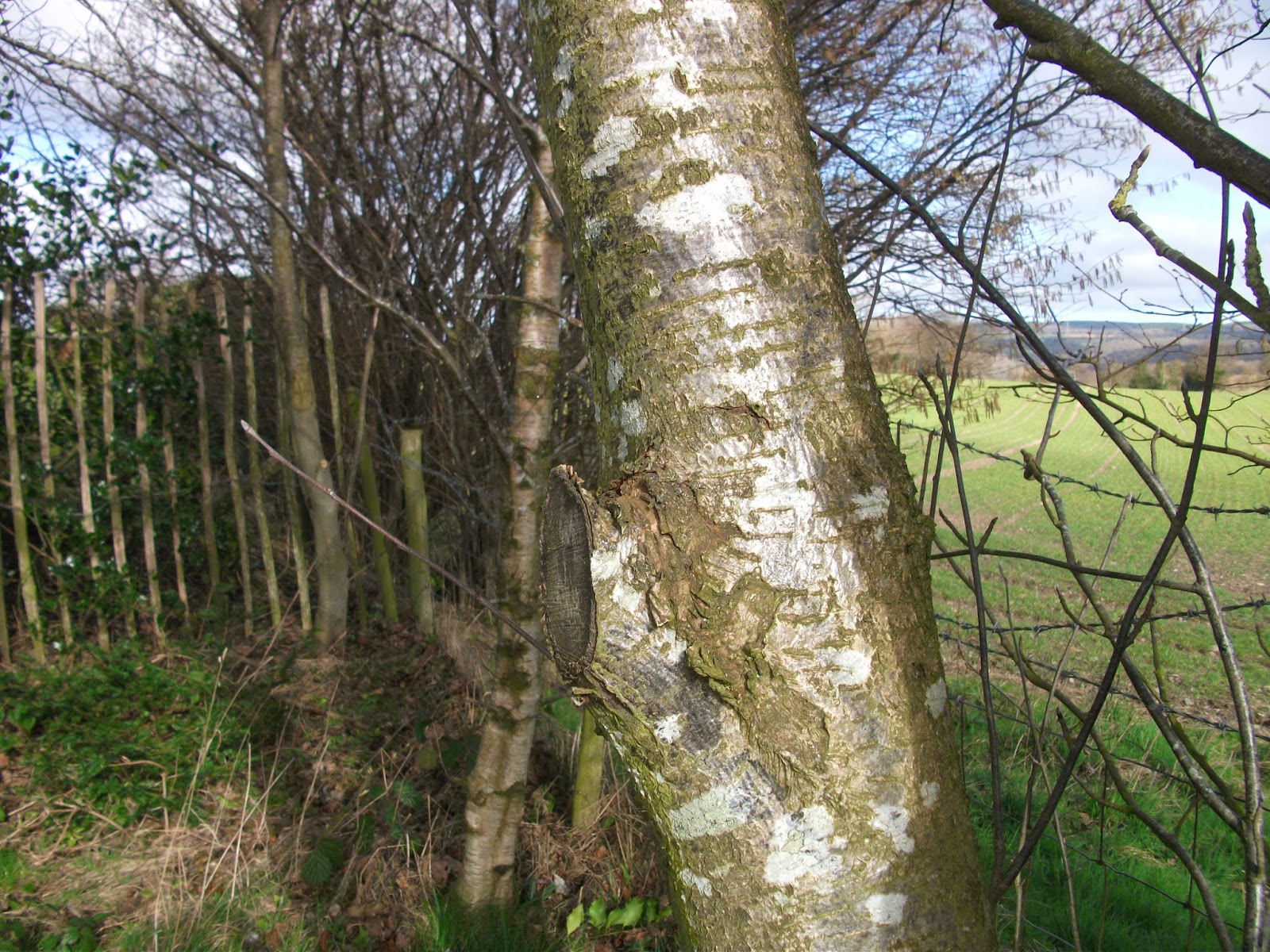 You can see where Ian took one or two of the lower branches off the tree so that they would not scrape against the shepherd's hut.  You can also see that the tree shares this corner of the field with a tiny self sown yew tree and, on the other side of the chestnut palings, a three big holly trees.  Interestingly all of these trees are associated in folklore with protection.  Holly trees in fields and near houses were said to protect against lightning strikes and when a branch was cut and brought into the house it protected against malevolent fairies, or at the very least helped humans and fairies to rub along together without the humans inadvertently causing offence.  In most parts of the country farmers did not uproot holly trees and indeed our neighbouring farmers here in North Wales leave them and generally do not cut the hollies when the rest of the hedges are trimmed. Yew trees were symbolic of death and regeneration in Celtic myth, presumably owing to their incredible longevity, and churches were built in places where yew trees were already growing as the Christian church appropriated that symbolism for its own purposes.  Rowans were believed to be protective against witchcraft, a belief found throughout England, Ireland, Wales and Scotland.  The Welsh for a rowan tree is cerddinen, pronounced ker-thin-nen, and it is a feminine noun, as most tree names are in Welsh.  I had never noticed before how the trees which curve around the hut protect us from all sorts of harm.  The hollies certainly protect from wind when it is in the North. 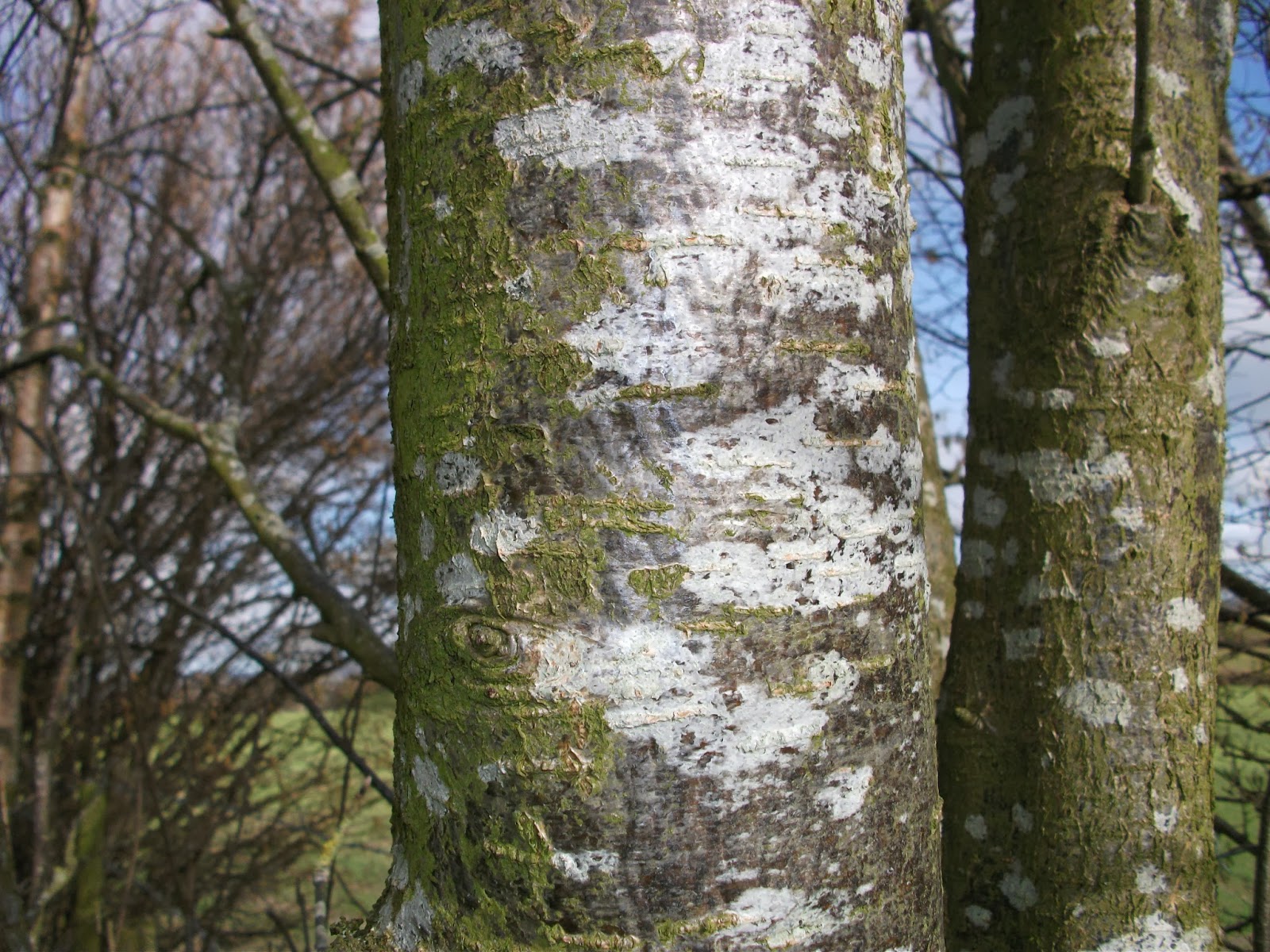 The bark is mottled with lichens and has a faint sheen to it. 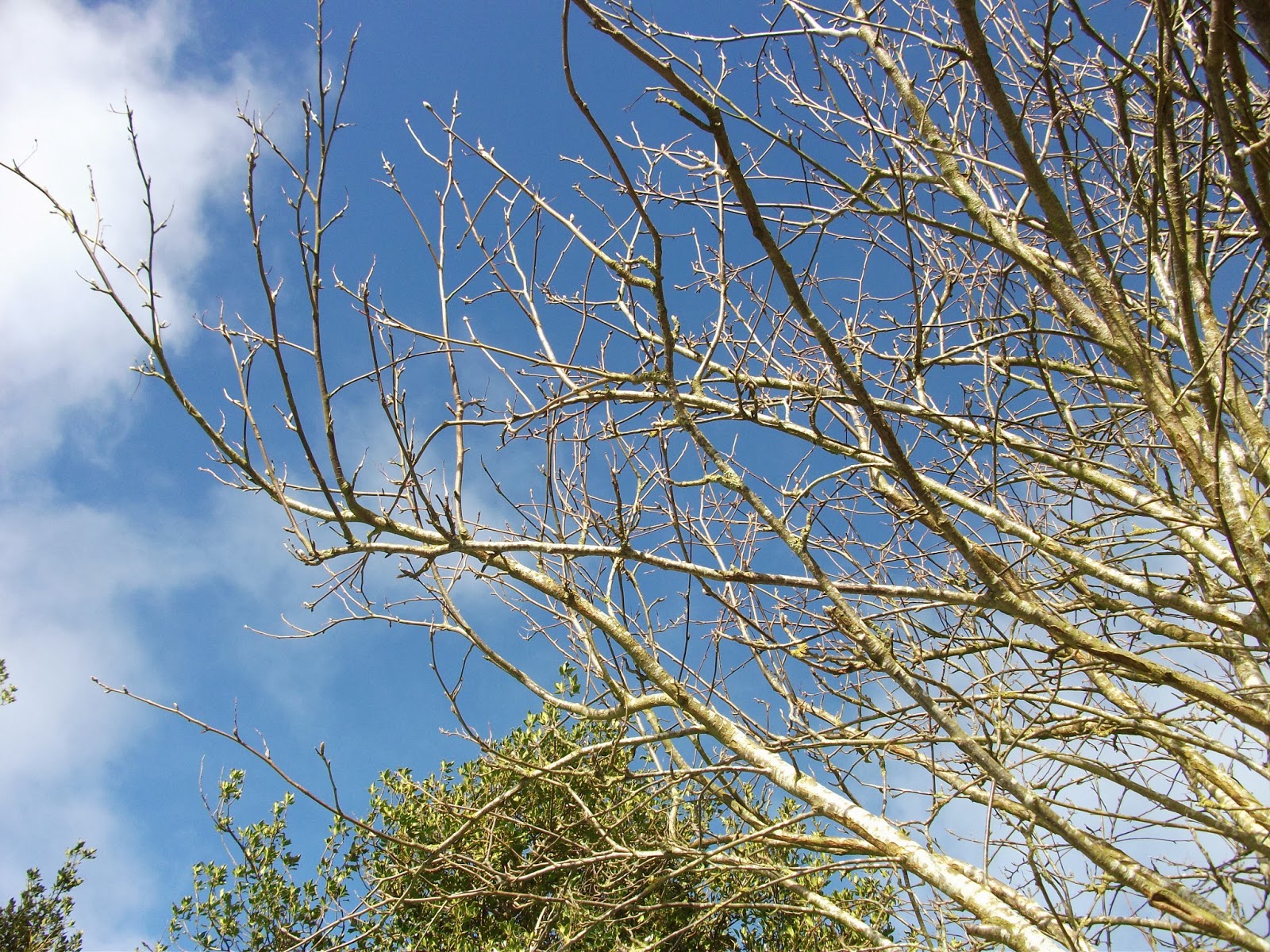 There are no buds yet on the bare branches.  Rowan does not come into leaf early. Around here it is usually after the elder, hawthorn and horse chestnut but before the oak and the ash so I would expect it to leaf some time in mid to late April.  I am really looking forward to seeing the tree change with the seasons and to reading about others' trees.  How poor the world would be without trees in it.
following a tree holly protection rowan tree for a year yew