- March 23, 2014
Last year we had a precious few days away in the Outer Hebrides.  I had wanted to go for years.  We hired a campervan and drove and ferried and kept on driving to the edge of the world. 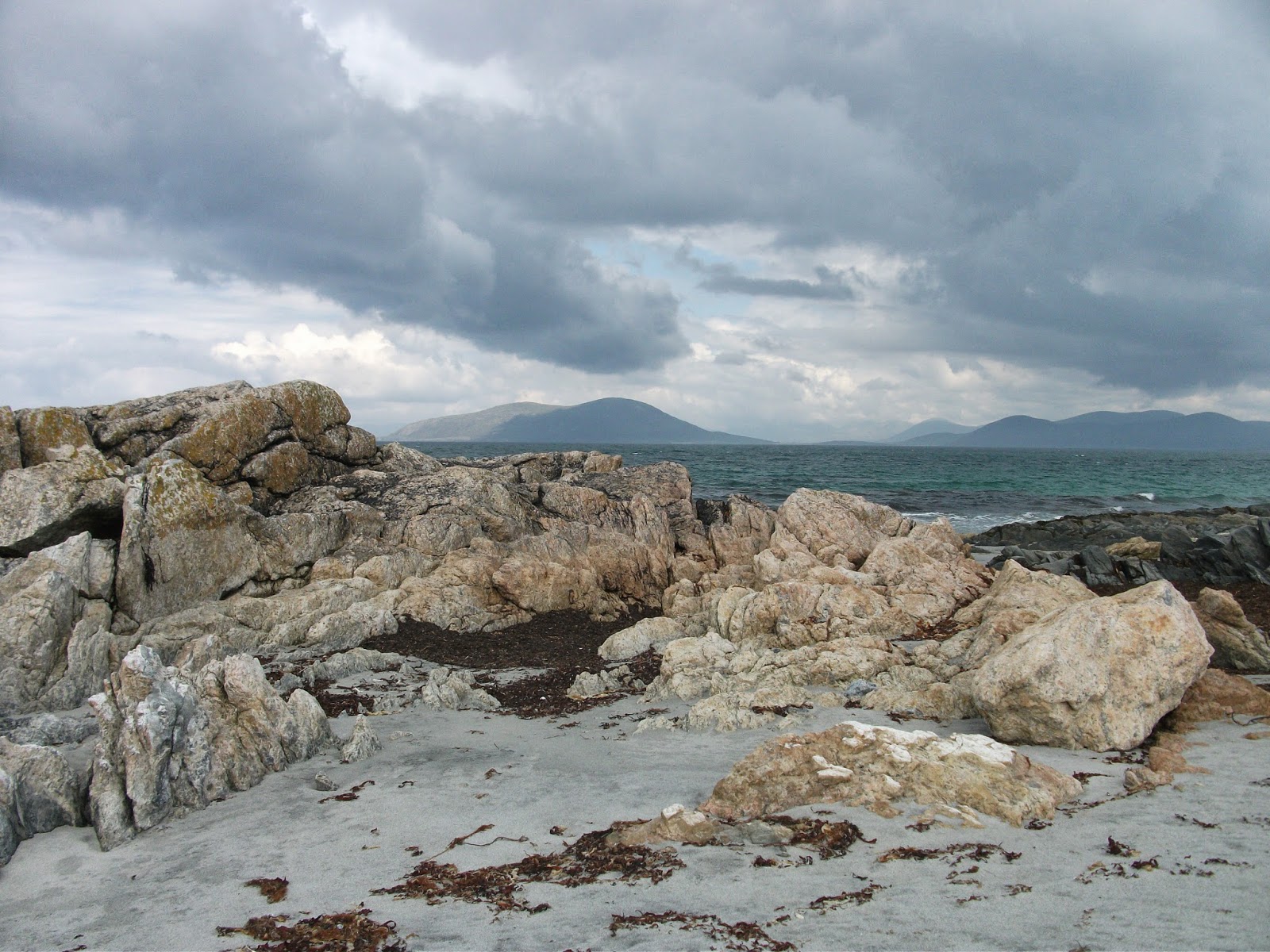 It was a special snatched few days of sun and wind and the simple, slightly uncomfortable but ultimately calming life that is life in a van, away from home, with nothing to do but look and listen and walk and read and eat.  I have almost lost it now, under the huge tides of this winter with my mother's death and my father's illness and the care of my father in law and the flood of need.  Almost but not quite.

While we were away I bought some wool from the Hebridean Woolshed, handspun fine Merino in the colours of the seas around South Uist. 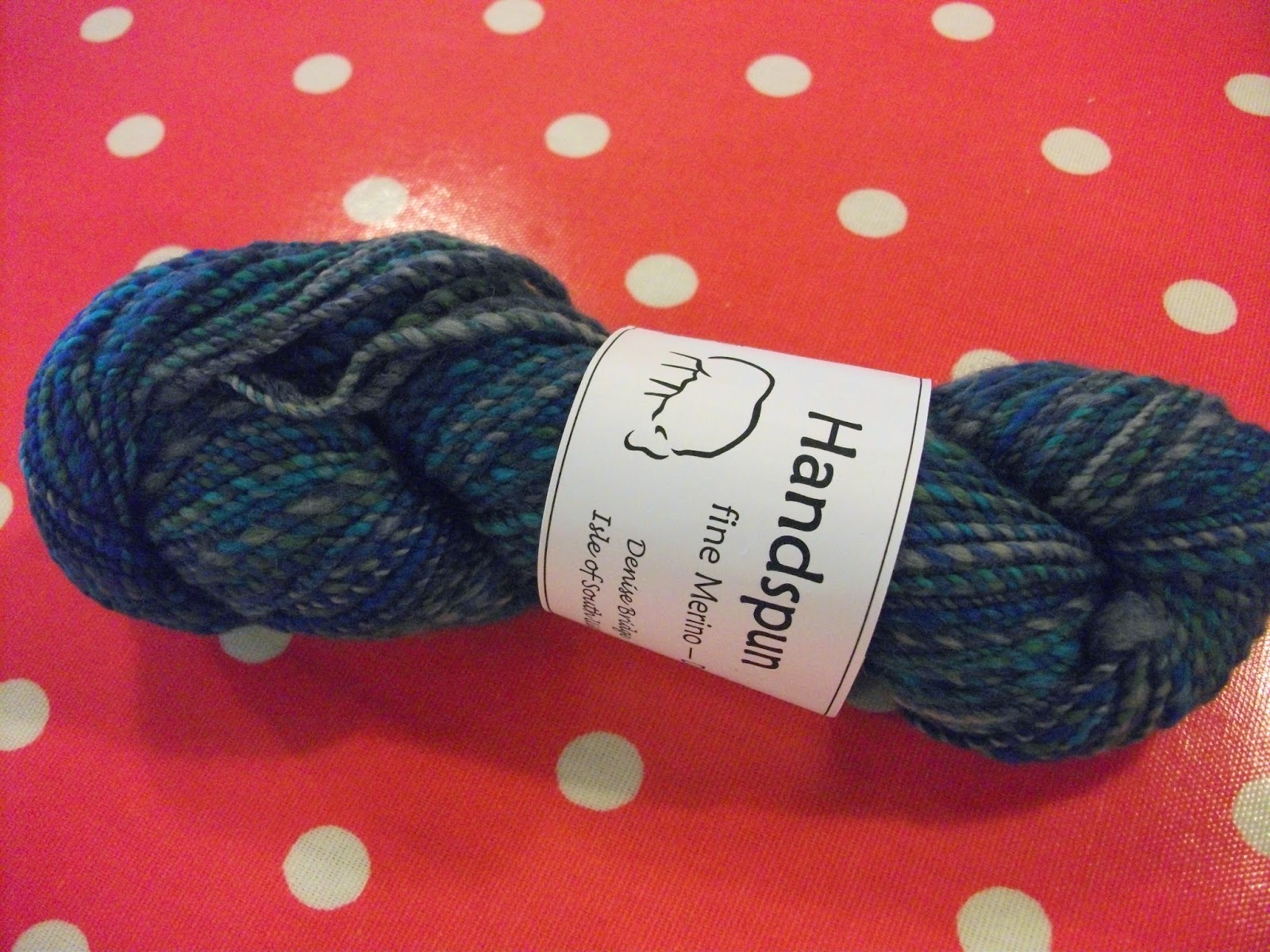 Here it is far away from home on my kitchen table in Wales.  I was going to make a cowl with it but after a couple of false starts I decided I wanted to have a go at doing something of my own, not a pattern or a design made by someone else but something or other that would be wholly mine, something that would remind me of South Uist and Berneray and Eriskay.  This is quite a big deal for me.  I know that the world of blogs is full of creative people making and dreaming and producing everything from the twee through the astonishingly accomplished to textile pieces which are as much art as a sketch or a painting or a sculpture. I am not one of them.  My skills, such as they are,  are academic or intellectual ones: skills with words or numbers or analysis.  I enjoy practical things too and I have quite deliberately explored the satisfactions of using my hands  since I gave up my job, looking to use the bits of me that were put to one side when all my time was eaten up by work.  I can cook and sew and garden and knit but my skills at all of those things are competencies, life skills in the long tradition of women's work.  There are better cooks and knitters and gardeners amongst my acquaintance,  friends and family and there are worse ones too.  I am competent, that is all, and I enjoy being competent and using my hands and making things.

What I have never really done is anything creative, unless you call trying to weave a good life out of the everyday creative.  Perhaps the most creative thing is what I am attempting to do with my garden but just now the space is too big and my time and energy are too small for me to be able to engage with it on the scale it requires.  I don't know what made me want to make this wool into something more wholly mine but I did.

I decided to make a cushion because this would allow me to treat one side as an image, something to be looked at rather than something to be worn.  I knew I wanted to use the colours of the wool to recreate for myself the sense of the Hebrides.  It couldn't be a picture.  It would somehow have to be something that represented the islands, even if it meant nothing to anyone but me.

I messed about.  Finally I came up with something which reminded me of the waves of the sea. 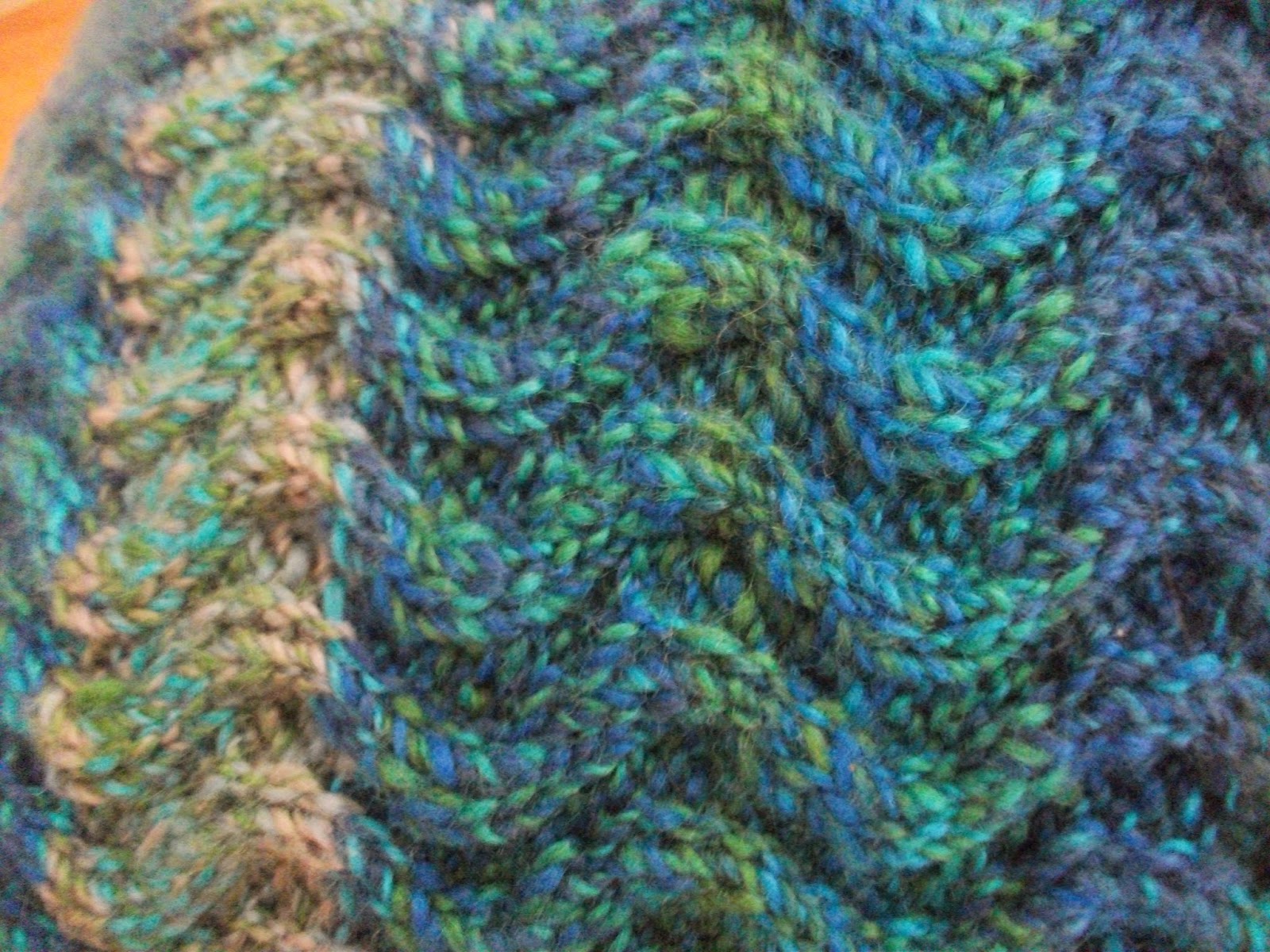 Somehow I wanted sea and sky and wind and stillness. 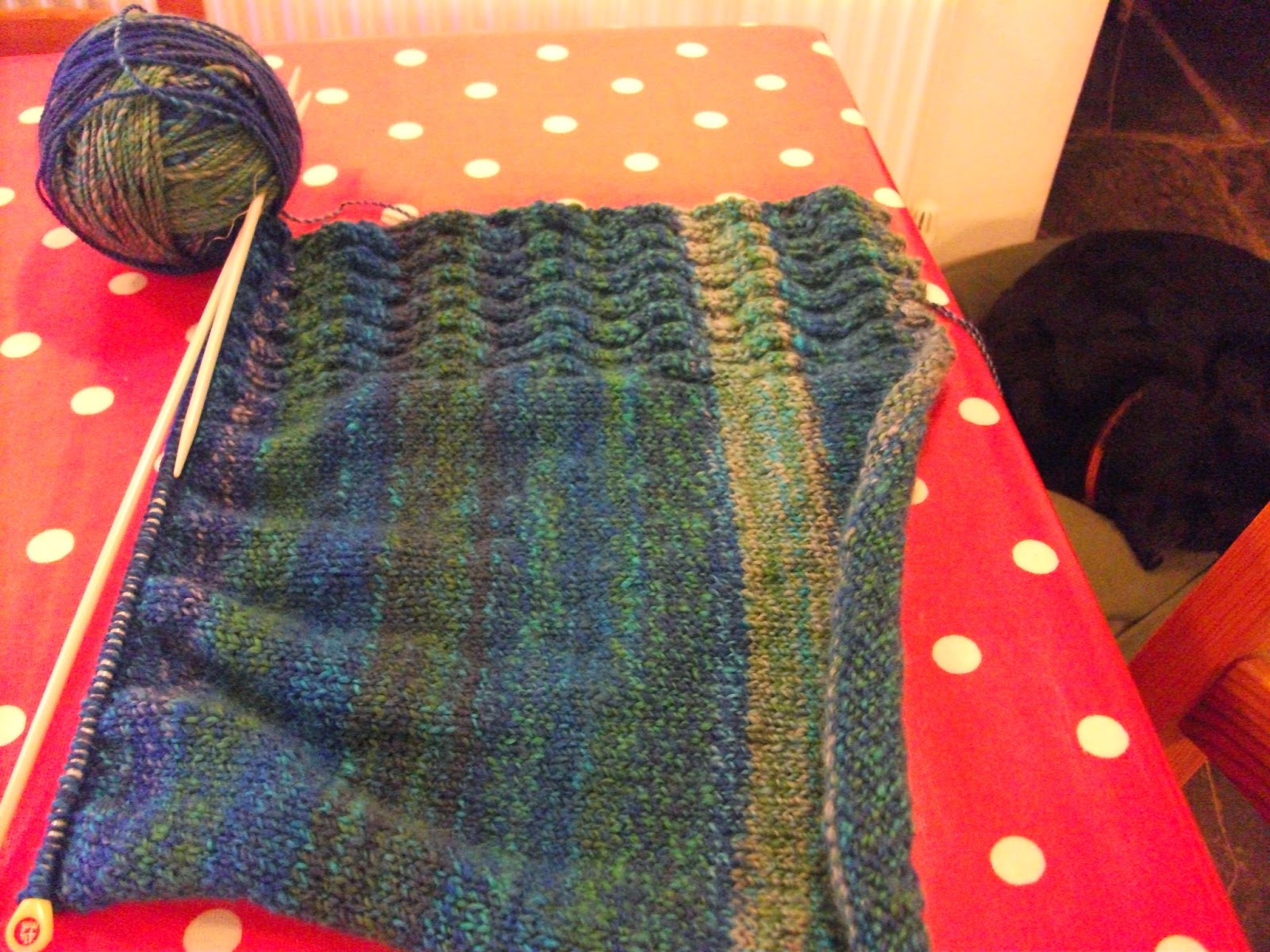 You can see that this was in January because son and daughter in law's lovely dog was still with us.  By then I had decided I had the sea and the sky. 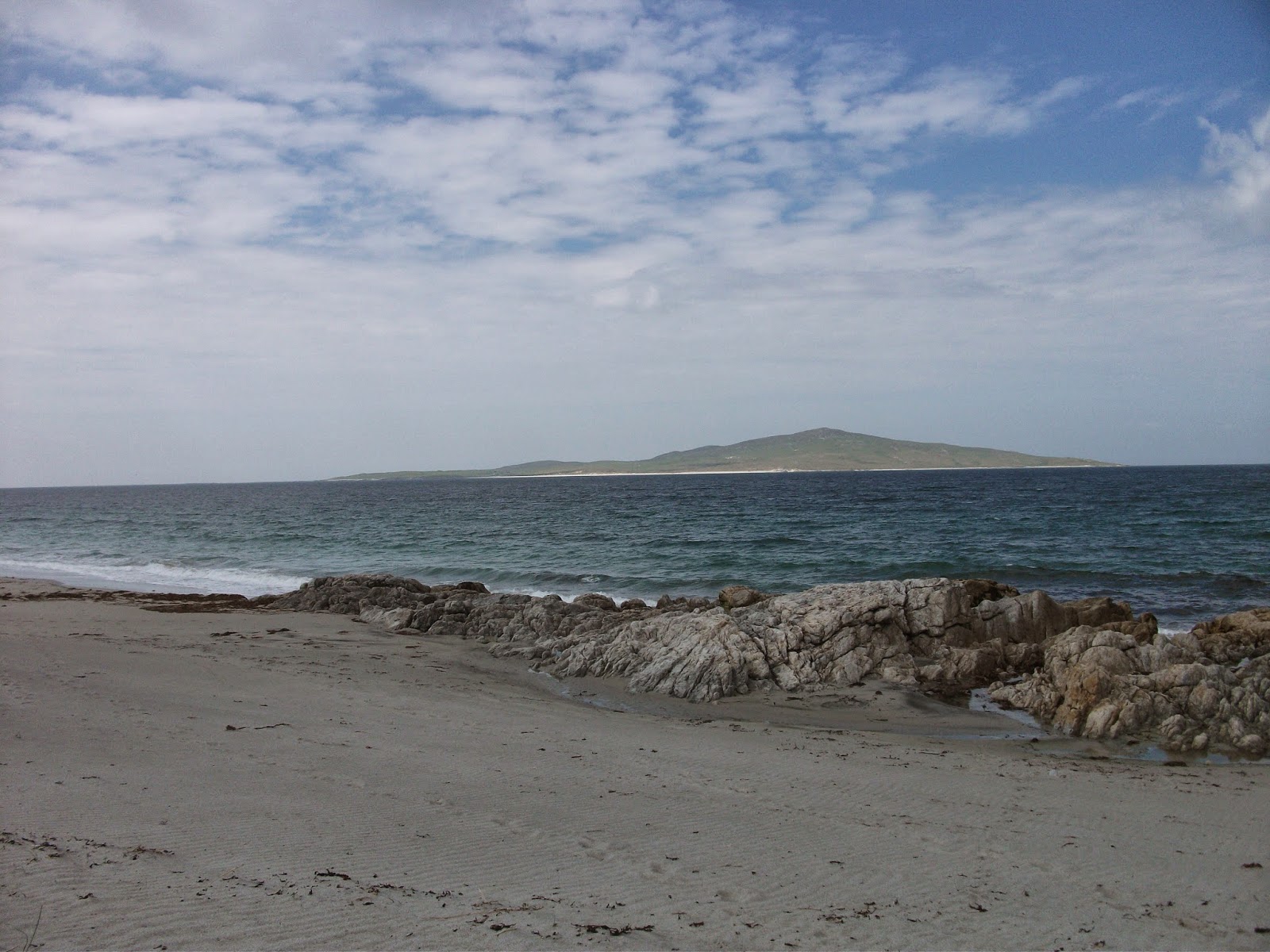 The reverse of the cushion uses garter stitch, perhaps another version of the sea.  I swatched and knitted and measured and sometimes gave it up and sometimes sat with it by the fire. 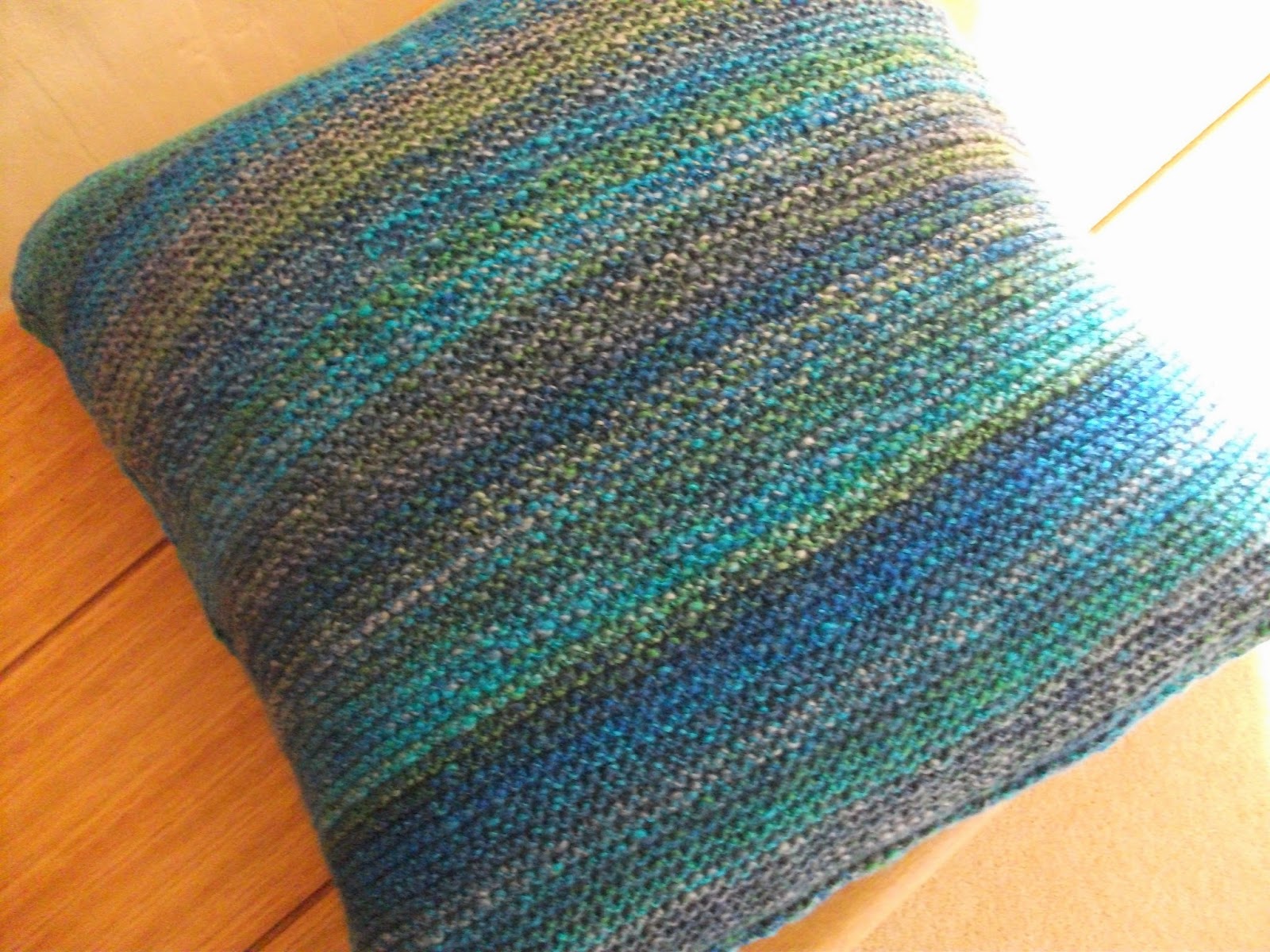 Each piece was finished with a row of single crochet, followed by a row of double crochet to make something with the echo of a frame. 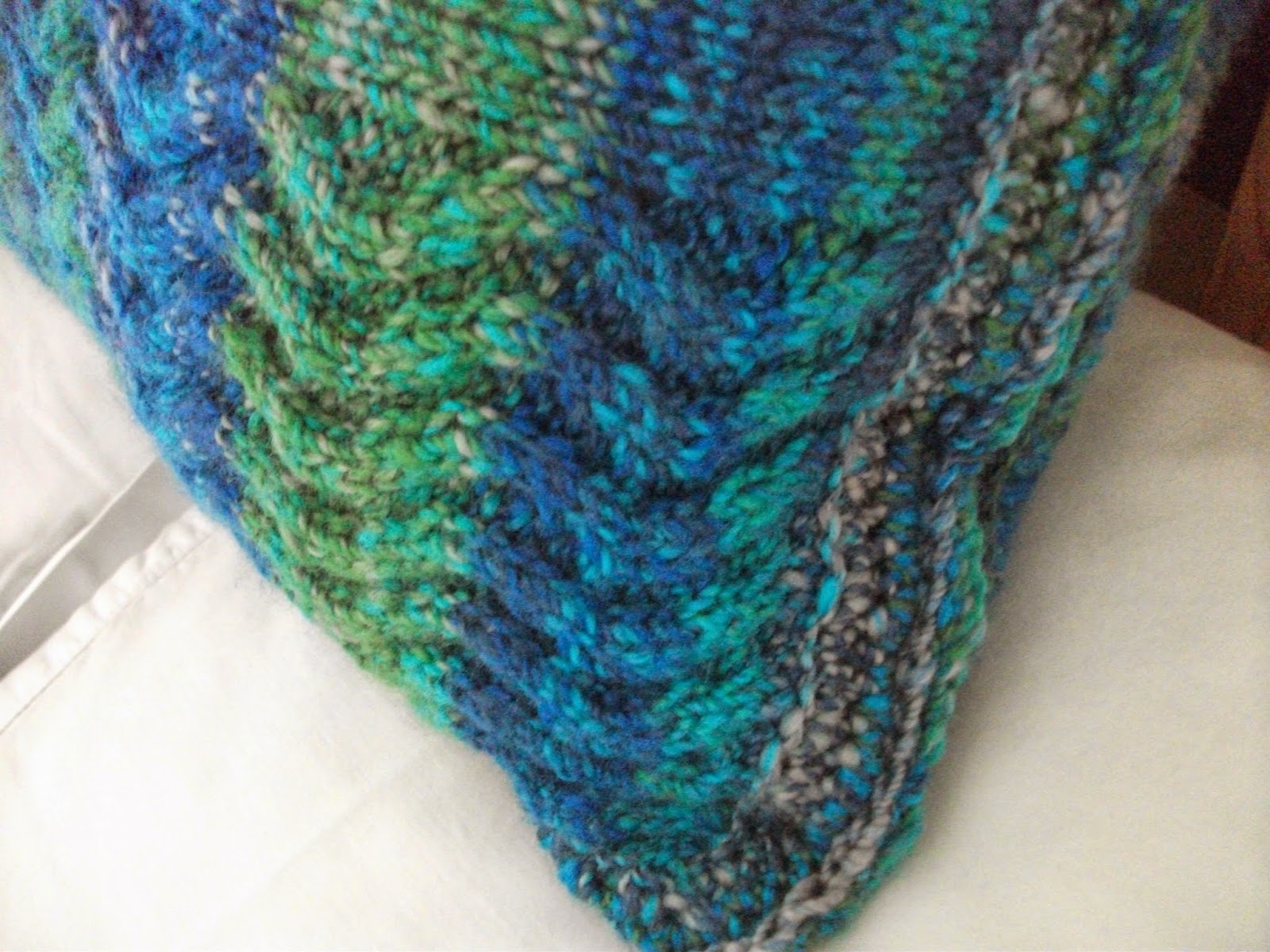 The two pieces were then joined using single crochet and here it is. 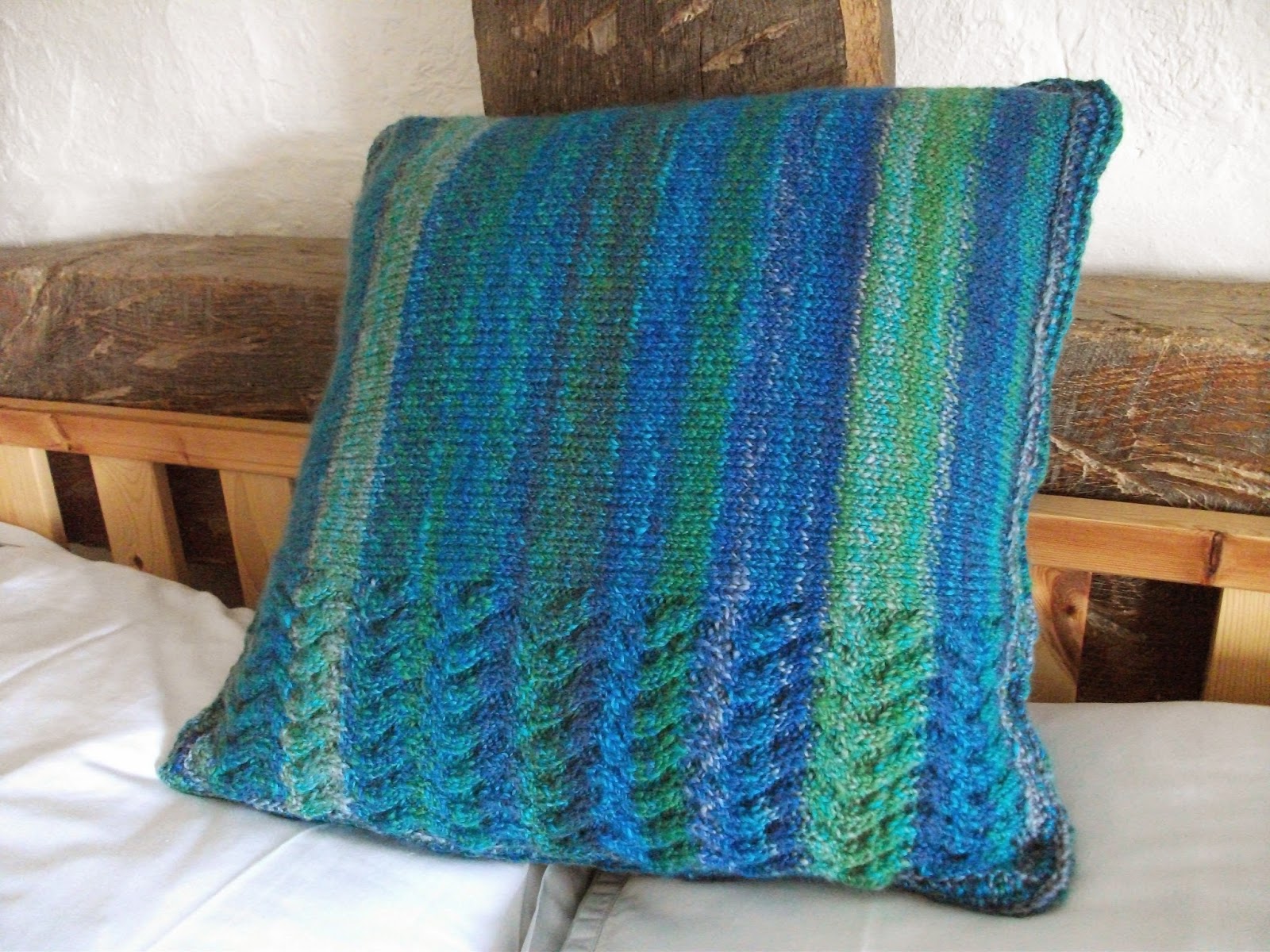 I do completely love it.  I love the fact that it is so entirely mine. 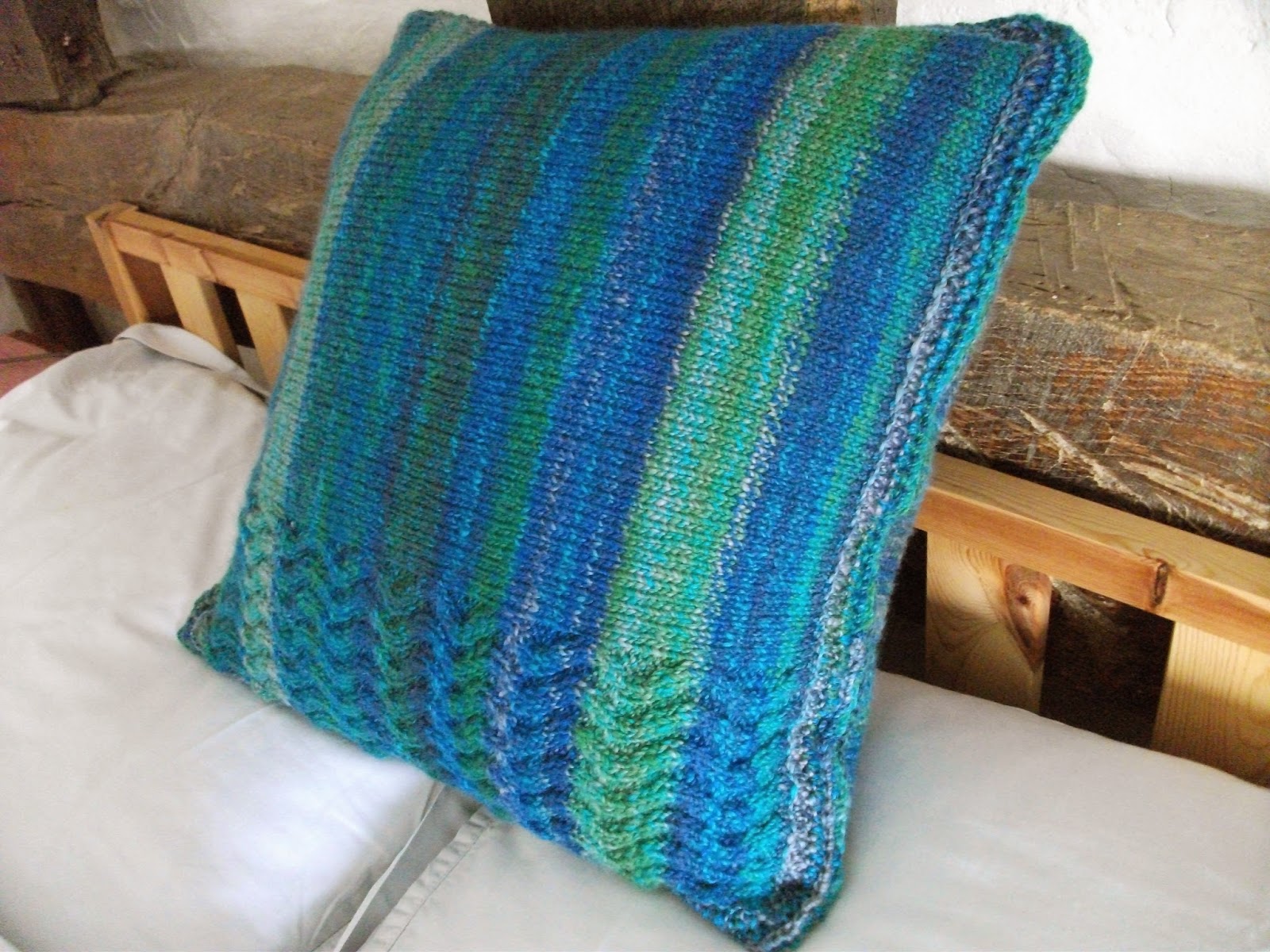 Generally when I make things I am very aware of the flaws and the places where, if I were doing it again, I might do something a little differently, a little better.  Somehow I can't feel like that about this cushion.  I don't mean that I am entirely satisfied with it.  How would you ever learn if you were entirely satisfied?  But it makes me happy.  Out of a beautiful material and a beautiful place I have created an item with meaning and memory knitted into it over a long and difficult winter.  It makes me feel something of the calm I felt when we walked the beaches of the Hebrides. 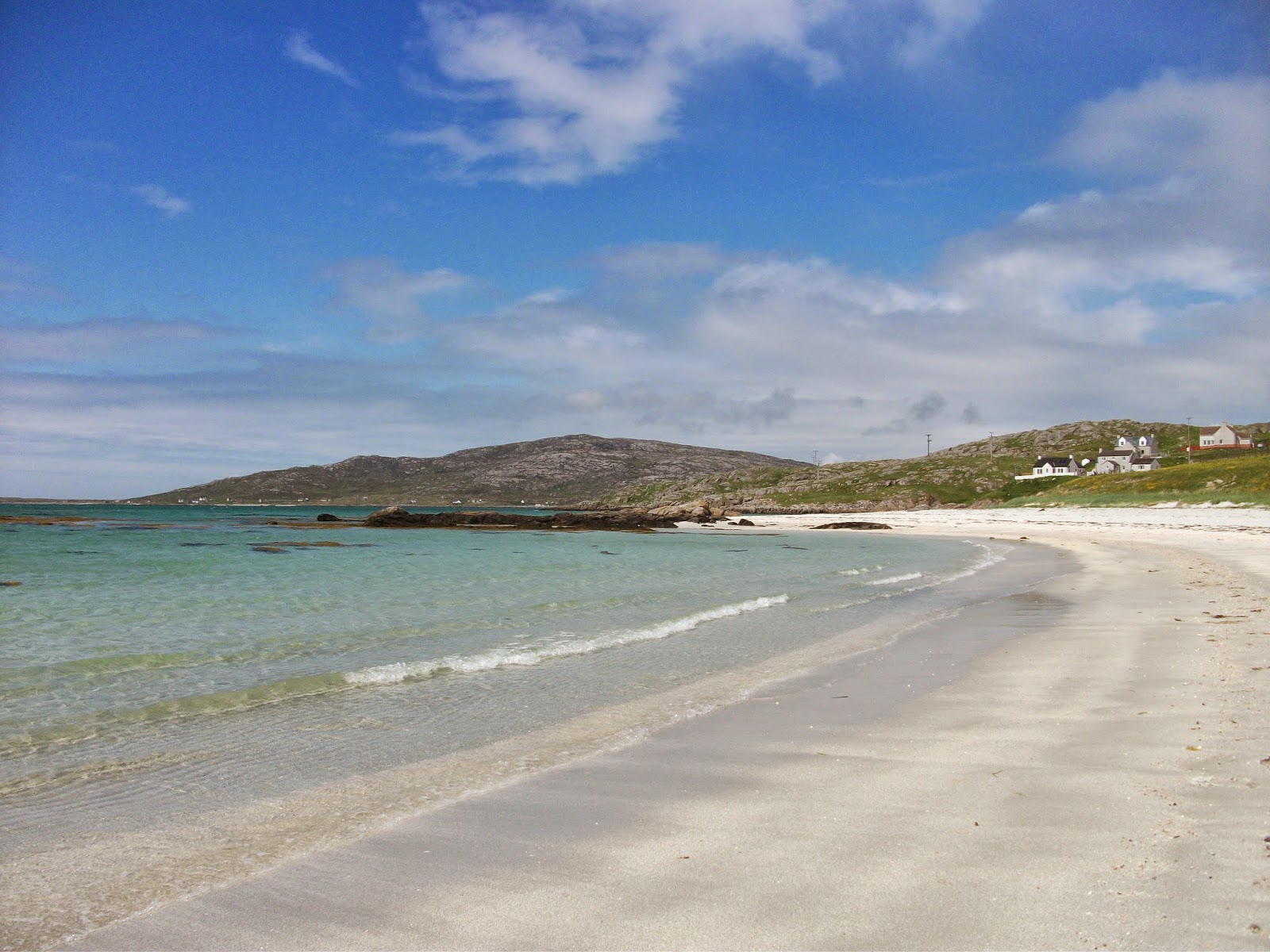 Whatever it does to others, it sings to me.
cushions designing hebridean woolshed knitting outer hebrides south uist