- January 04, 2017
Well somehow I didn't manage to post December's extract from the year of being sixty two, principally because I didn't write it!  Somehow the coming of Christmas, trying to keep up with my Spanish and the upheaval of house redecorating just squeezed my writing time into non existence.  I had been intending to spend a chapter looking at the upsides of ageing.  From the volume of stuff you read about "anti-ageing" you might suppose that there aren't any upsides, but that's not true.  My mother used to tell me in her forties, fifties and sixties that she would not want to go back, that she was genuinely happy to be where she was in her life.  She would I suspect have stopped the clock before my father began to be ill but even that would have taken them both well into their seventies.  I never totally understood why she was so content with the age she was when we had those conversations but I could see that it was true.   Knowing that has given me a sense, as I have myself grown older, that there must be things to look forward to, secret pleasures perhaps which would be revealed to me in due time.

And indeed there are.

How do you talk about the pleasures of wisdom without sounding as if you are setting yourself up for a major pratfall?  And yet the most profound pleasure in growing older is in learning to live better, in getting to know yourself and to understand yourself and in learning what matters to you.  And how can those things be anything other than elements of acquiring some form of wisdom?

Sometimes you do this living better consciously.  You face a situation similar to something which has happened to you previously in your life and you remember how you dealt with it before.  Thoughtfully and intentionally you might decide to do it differently.  For me those intentional times are mostly about letting go, letting go of the urge to argue or explain or to put my case.  This is an interesting balancing act because it is important that keeping silent is not the sort of repression which leads to resentment.  It is about thinking whether it really matters, in which case I must speak or act, or whether, in the grand scheme of things I can let it go, open my hand and let it rise gently into the air like a lighted balloon.

Perhaps more often there is little conscious thought in living more calmly, more easily and more generously.  It is simply that life has thrown a lot at you and, if you are lucky, you have weathered the storms and learnt what to hold close and what to let go.   And would I wish to live again the intensity, even the anguish, of some of my twenties and thirties?  No.  This is hard won, this calm.  It is worth the saggy stomach and the wrinkles around the eyes.  I hold it to me.  I would not swap. 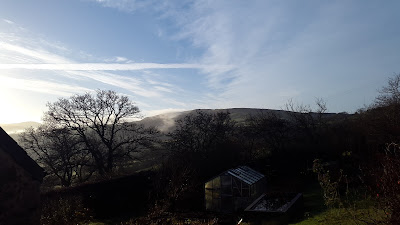 And I suppose that is part of the whole business of being comfortable within one's skin.  I am more confident, less concerned about what others think, less bothered about appearances, my own and other people's, less driven.

What are the other bonuses?  Being invisible if I wish is a great one after a lifetime of being judged and doubtless judging myself on  my looks.  That is just the currency you take into the world as a reasonably attractive female.  When I started to become less visible in my early fifties I didn't like it much.  Now I have learnt that I can turn it on and turn it off, depending on my clothes, my make up and my mood.  And I find that I like being able to be invisible, or nearly, and simply to observe.  I hadn't realised that visibility as a woman could be a tyranny and how peaceful it can be to slip the cloak on whenever you choose.

Having time is another huge one.  I realise that I am very lucky in this particular sense of time to myself and the sensation has really only emerged following the deaths of my parents and father in law.  Previously the demands of children and of jobs had been almost seamlessly replaced by the demands of others who relied on me.  I hope we still do a lot for other people, particularly our children and grandchildren, but for the first time since I was a teenager there are occasional days when I wake and no one needs me and no job requires me to be somewhere doing something.  I know that this won't last.    This is a precious period when Ian and I are well and have each other and I would swap this time for more time with those that I loved in a heartbeat.  But it is a rare and precious luxury.  Sometimes I sit in bed and watch the sun come through the window in the morning and wrap it around me.

And the other great bonus sits right alongside this time to myself and is a glorious counterweight: adult children and grandchildren.  Having children is simultaneously wonderful and extraordinarily hard.  When mine were young I both loved it and was overwhelmed by it.  I was exhausted and exhilerated and cross and delighted and miserable and content and just about managing pretty much every day.   Some days I felt that the sheer weight of it was rubbing me out.  But having adult children is pretty wonderful, if you like them.  They have become people you really like, like friends but with a deeper hinterland.  And you find that they know stuff which you don't.  You are not responsible for them any more.  They are just out there living their lives but still connected to you by a invisible filament of love.  I love it.  And grandchildren it turns out give you all the deep delight of the best moments of having your own children without taking all your energy and turning your life upside down!  Well that is not quite true, they do turn your life upside down but in ways that give you most of the pleasures and few of the downsides of parenthood the first time round.

So are there bonuses in ageing?  You bet.  I don't mean to be pollyannaish here.  I don't intend to ignore the darker side.  But if I don't articulate what it good I am not being honest either.  And for me there is much that is good, so good that I would not swap with my younger self.

What are your upsides?
ageing children grandchildren the year of being sixty two