Well I am running out of things to say about coronavirus  It persists.  The new variant first identified in India seems to be more transmissible and is now dominant here in the UK.  Case numbers remain relatively low but are rising.  Will the big opening up which we are expecting in England on 21 June happen?  I don't know.  Will we get to France towards the end of the summer?  I don't know.  Will we be allowed to mix inside here in Wales soon?  I don't know.  So here is a taste of the variety of ways in which I have been distracting myself.

Running.  I am trying to get back to being able to run 10k in readiness for the Chester 10k which with luck will take place in July.  I have only run 10k once before and that was last year just before the lockdown struck when Ian and I ran the Chester 10k together on the 8th March 2020.  I was totally delighted to do it, even if I am slow as a slow thing.  I don't really care if I am slow.  That is just the way it is.  I finished last year's 10k determined to do another one and intending to keep training.

Then the first lockdown threw my running badly off course.  We had to exercise from home and I was living up a very steep hill where there was no way to go which did not involve ferocious inclines.  I lost my way a bit and then returned to running last summer when we were once more allowed to drive for exercise.  By October last year I was back to running two or three times a week and getting up to about 8k.  Then a mini disaster struck.  I had a suspected TIA and was told to stop running.  After a month or so my GP said I could start again and then we hit winter and we were moving house.  Running slipped down the priority list.  I always tried to do something but by the time we moved here in February I had lost a lot of fitness.  So since February I have been trying to get back to doing longer distances and to running more frequently.  Somehow I had got myself into a mindset that left me wary of running longer than 5k, feeling that the longer distances were beyond me, feeling intimidated by them again.

This morning I really wanted to run at least 8k, perhaps even 9k if I felt ok.  And I have done it.  I had to walk a couple of the steeper bits of hills and I really should have carried water with me because I was aware of struggling with the heat.  But I did it.  It is so good to be able run in a rural area.  Birds were whipping in and out of hedges.  The wildflowers were overflowing on the verges.  The hawthorn is in bloom and every now and then the breeze hit it and a great waft of warm scent drifted past.  I will do a couple of short runs this week and maybe next week have another go at 9k and see if I can run all of it.  But I am chuffed.  I am getting back to where I want to be. 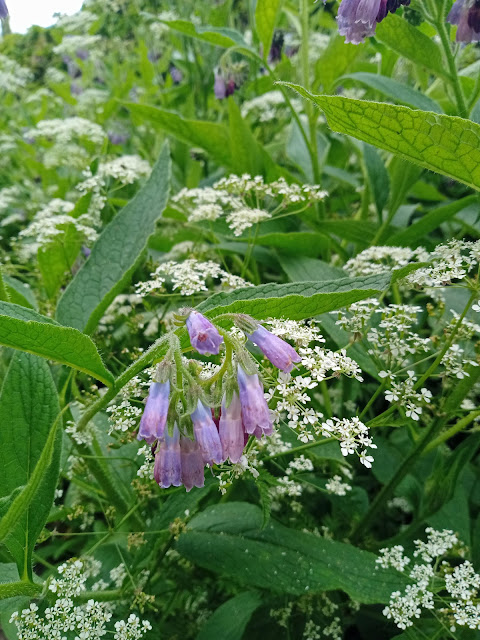 Reading.  All through this period of coronavirus I have read as I used to read when I was a child and a teenager, gulping up books, racing through them, losing myself in them so that it is a slight surprise to lift my head and find that I am here, in 21st century Wales, not in New Caledonia (Rachel Joyce's Miss Benson's Beetle) or 1930s India (Alys Conran's Dignity), the Swiss Alps in the 1950s (Stella Gibbons' A Swiss Summer) and, at the moment, 17th Century London (Andrew Taylor's The Royal Secret).  I haven't read anything I haven't enjoyed.  I have become far more ruthless as I have got older.  If a book does not draw me in within the first hundred pages or so I abandon it.   There are so many wonderful books out there to read and reread and life is short.

Knitting and making things.  My beloved Icelandic jumper continues on its slow way. A couple of days ago we met up with younger daughter and her family for a walk and a cake and five year old granddaughter offered me a ball of blue wool wondering if I would be able to make a dress from it for her baby doll. 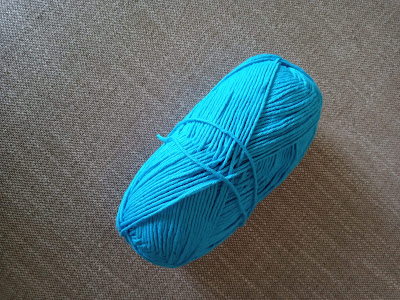 I like having lots of things on the go.  I shall start this today probably as if I put it in the queue behind the jumper Grace may be waiting some time.

And this is my absolute favourite time of year.  There are swallows in the sky, Queen Anne's lace by the path, and the sun is warm. 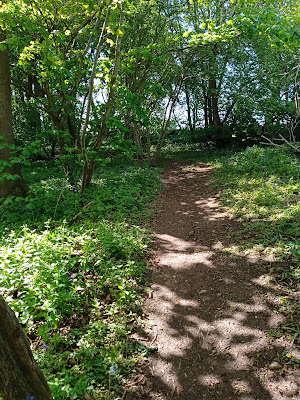 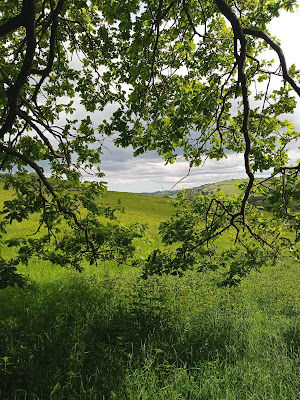 And there is salmon and mango to cook for tea and Michael Palin to watch on the television.  Is all of this my own way of putting my fingers in  my ears and singing to drown out the sound of politicians talking fudge and scientists predicting doom?  No doubt it is but it works for me!

What is keeping you sane in insane times?