I have just been for coffee after yoga outside in a friend's garden.  We were catching up after our last week away and I was telling her about the progress which my sister and her husband are making on building their house (a real with their own hands sort of build) when another friend said "You mean you and your sister are both having new houses built?  That's odd!  I don't know anyone other than you who is building a new house and then there are two of you from the same family!  How did that happen?"

I hadn't thought about it as an oddity but I suppose I see what she meant.  And as to how did that happen, I am not really sure!

I am not even sure who began the whole process.  I know that my brother in law, who is an intensely practical man and an electrical contractor by trade, has always wanted to build his own house.  I know that Ian and I have always been interested in houses and that for some years we had the idea that building a new house might the one thing that would lead us to leave our ancient and beautiful house up the hill.  We have had our plot for nearly four years now.  Good plots are scarce and we bought it when we found it before our house was sold.  My sister and brother in law bought theirs a little after we bought ours but are further on with the build by quite some way.  I suppose the interesting question is why, when most people don't do this, we are both engaged in the same endeavour.

I was thinking about it when I was walking home.  It must have a lot to do with our parents.  My mother loved houses and loved rescuing them from neglect.  My father was the practical one who liked the whole process of making and mending and fixing.  Over a period of about twenty years they bought and renovated five different properties.  This was after my brother, my sister and I had all left home.  It gave them a shared focus and played to their very different strengths.  My mother was good at looking at a run down place and seeing what it could be.  It became a family joke.  We would be standing in a god forsaken tumble down farmhouse somewhere.  Mum's enthusiasm would begin to rise.  "No, no," she would say.  "Don't look at the damp on the walls.  Just narrow your eyes a bit and look over here.  If you took down this wall you would have the light from this window...."

I never really understood the purpose of narrowing your eyes!  I think she meant that you had to look not at the detail of damp and dirt but at the shapes of things.  Dad by contrast was good at understanding what you had to do practically to make the vision happen.  So I suppose the sense that things were possible was strong in us as we grew up and as we started families of own.  And in that way in which families repeat themselves, both my sister and I married practical men, men who like to do things and who know how things work.  Certainly there is no way that I would be undertaking the adventure of our housebuild on my own.  I would be up for moving, buying a new house, maybe even renovating and making something my own but the sheer scale of a new build would daunt me if I were alone.  Ian brings a forensic eye for detail and a readiness to grapple with technicalities that I don't have and which reassures me.  Together we can bounce ideas of each other, check each other's thinking, one can be upbeat when the other is down and vice versa.  It is a genuine joint undertaking.

And despite the fact that it sounds as though my sister and I are doing the same thing, what they and we will produce will be very different.  They have a sizeable plot on what was agricultural land with what is known as Class Q planning permission which allows for residential conversion of agricultural buildings.  This dictates the shape and size of their house.  We have a smallish plot of unusual shape which has needed an imaginative architect's eye to produce plans which will make the best of it.  We will produce very different houses, both interesting and I hope beautiful in their very different ways, both environmentally friendly but each rooted in its very different landscape.

So having been thinking about buildng I thought you might like an update about the process and where we are up to. 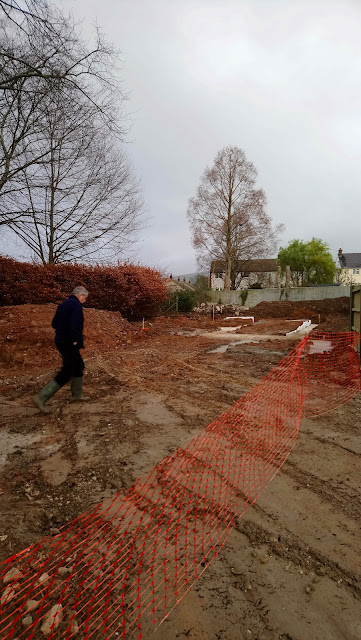 Here is Ian at the very beginning of the build in November last year.  It seemed like a muddy wasteland. 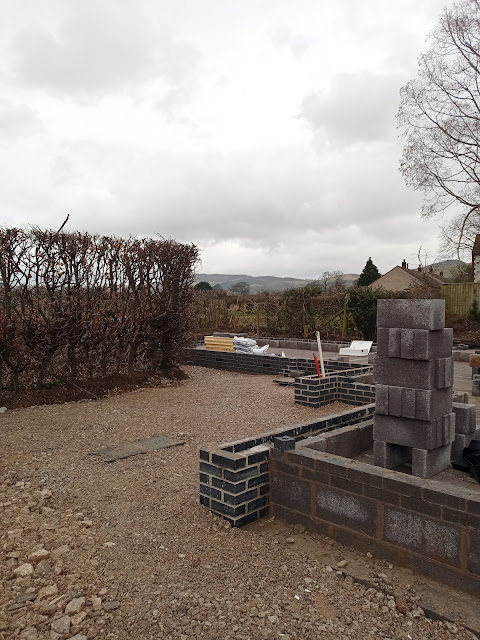 By February the site is gravelled, the foundations are in and the shape of the house begins to emerge.  You can see the line of hills, the view of which is part of why we bought the plot. 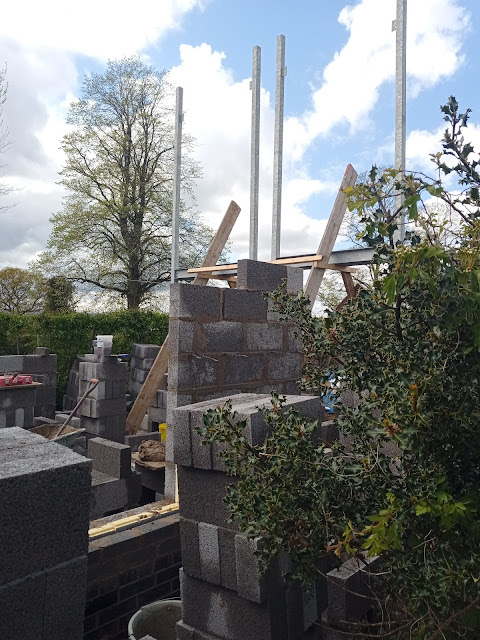 By May the walls are going up and the steels for the large windows are in. 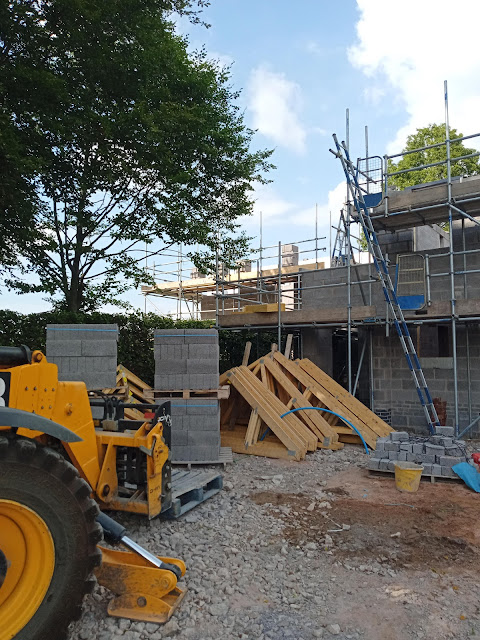 And here at the beginning of July the walls are up and the roof trusses have been delivered.  It is a long, long way from being finished.  One of the fascinating things about watching my sister and brother in law build their house is a glimmer of insight into just how much more work there is to do even when the shell of the house is complete and watertight (and we are not there yet).  But it begins to be a house.  When the builders have gone in the evening we go to see what progress has been made.   I watch how the sun moves and where the light falls.  Sometimes I have glimpses of what the house will look like and how it will be to live there.  "Just narrow your eyes...." comes my mother's voice.   It is almost eight years since she died yet I smile at her.